How I Found Freedom In A Tiny House 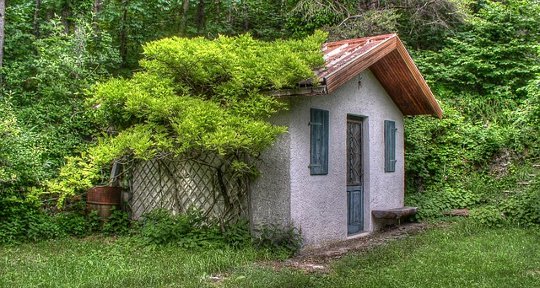 What is a house? I feel this is a dangerous question, which holds within it the seeds of a disruptive innovation, so read on at your own risk.

Rethinking what a house is could change your life, and perhaps the world. Let me explain through my own experience.

When I was an intellectually promiscuous doctoral student my eyes happened to fall upon a copy of Henry Thoreau’s, Walden, a fiery “simple living” manifesto, first published in 1854. This book, like no other before or since, ignited in me a shift in consciousness that I can only describe as an earthquake of the soul.

It shook me awake from a deep slumber, opening my eyes to how consumerist cultures were foolishly celebrating a mistaken idea of freedom, leaving people materially rich but too often empty and twisted inside.

Thoreau’s writings also offered poetic insight in the alternative way of living now known as “voluntary simplicity”, a living strategy that seeks to minimise material needs in order find enrichment and purpose in non-materialistic sources of meaning and satisfaction.

The ancient Chinese philosopher, Lao Tzu, advised that “He who knows he has enough is rich”, with Thoreau arguing a similar line that those of us who have enough, but who do not know it, are poor.

The Real Price Of Houses

What struck me most about the writings of Henry Thoreau was his penetrating analysis of housing. “Most men appear never to have considered what a house is,” he declared, “and are actually though needlessly poor all their lives because they think that they must have such a one as their neighbours have.” What was he getting at?

Thoreau had seen Native Americans in his town living in tepees of thin cotton cloth, which in the first instance could be constructed in a day or two, and taken down and put up in a few hours; and every family owned one. He compared this to the average house in his neighbourhood, which cost about eight hundred dollars at the time.

Thoreau noted that to earn this sum would take from ten to fifteen years of the labourer’s life; add the farm and one would have to spend twenty, thirty, or forty years toiling – more than half one’s life is easily spent.

Would the Native Americans have been wise to give up their tepees on these terms? It was that question that changed my life. I began doing the maths on a “typical” house in Melbourne and discovered that I would probably have to spend forty years toiling to pay for it, possibly in a job I didn’t always find rewarding.

At the end of such a life, perhaps I would not have had a house so much as the house would have had me. The Native Americans in their tepees would have had cause to pity me.

Was there an alternative way to provide shelter for myself that didn’t make such a heavy demand on my freedom? I put my mind to how to escape the death grip of a mortgage.

I approached my housemates at the time and asked whether they’d mind if I built a shed in the backyard and live in it. They thought I was mad, but didn’t object, and in few days I had built myself a humble abode – for $573 Australian.

I lived in it happily for two years, until the landlord decided to renovate, kicking us all out and forcing me to deconstruct the shed.

While living in a shed may not be the answer to our housing problems, this experience made me realise that a small and simple abode is sufficient for a good life. McMansions cost far more than they come to.

My shed was not much, but it was enough, and just enough is plenty.

In the first week of December I built another “tiny house”, with a small group of friends. For the last three months I had been salvaging wood from the tip shop, picking up free windows from the side of the road, jumping in and out of skip bins and reclaiming iron that was destined for landfill.

We live in wasteful society, but when I started looking for free or second-hand building materials I was astounded at how easily they were acquired.

Over the course of nine days a group of about ten of us built a “tiny house” for less than $2,000 Australian. It has a small footprint, but the mezzanine floor makes the space eminently livable.

Whatever inconvenience might come from living in such a small abode, surely being liberated from 40 years of labour is an abundant reward. If the ten of us had stayed there for a few months we all could have had such an abode, and been enriched by the creative process.

The Start Of A Movement

There is a “tiny house” movement emerging that is taking this “less is more” calculus seriously. By building a tiny house on the back of a trailer it can even be possible to avoid the suffocating expense of land, although there are regulatory barriers that need to be overcome or clarified.

Tiny houses may not be for everyone - I can sense the growing families wanting to interject! - but in an age of extravagance, we could all find liberation in the insight that small is beautiful. Smaller houses would also lighten our ecological footprints, using fewer resources and being easier to heat, due to their modest size.

Imagine being mortgage free after a few months of work. It would help if we had a regulatory framework that explicitly made room for the tiny house movement. Perhaps the greater barrier, however, is the social reluctance to think differently about what a house is. In short, we need more brave pioneers to get the culture shift underway.

With one’s housing requirements so easily met, and having escaped the iron grip of indebtedness, one would then be faced with the exhilarating but terrifying question of what to do with a life of freedom.

Book by This Author

Click here for more info and/or to order this book.

Dr Samuel Alexander is a lecturer with the Office for Environmental Programs, University of Melbourne, teaching a course called ‘Consumerism and the Growth Paradigm’ in the Masters of Environment. He is also a research fellow with the Melbourne Sustainable Society Institute and co-director of the Simplicity Institute. He recently published a ‘utopia of sufficiency’ called Entropia: Life Beyond Industrial Civilisation.

What Will All The Stuff You Own Mean When You're Older?