Dogs Really Can Chase Away Loneliness 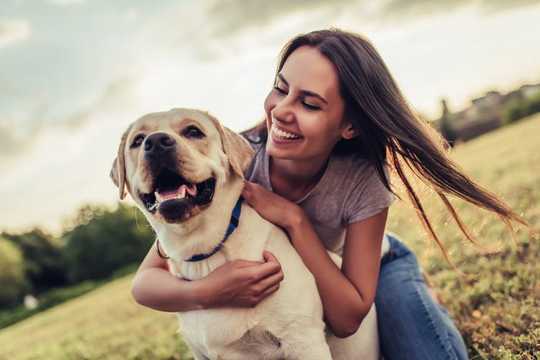 Feeling lonely? A dog may help. Our research out today confirms what many dog owners already know: dogs are great companions that can help you to feel less lonely.

Cuddles and slobbery kisses, meeting other dog owners in the park and a general lift in mood all likely help.

Why are we studying this?

Almost two in five Australian households own a dog. And although most dog owners will assure you, in no uncertain terms, their dog is a source of sheer happiness, scientific evidence is lacking.

Most previous studies have compared the mental well-being of dog owners to non-owners at a single point in time. The problem with these studies is they cannot tell if dogs actually make us happier, less lonely or less stressed. They also cannot tell us if dog owners are simply in a more positive state of mind in the first place.

What did we do?

Our study, known as the PAWS trial, involved 71 Sydney adults who were separated into three groups:

People filled out surveys to measure their mood, loneliness and symptoms of psychological distress at the three different time-points. We then compared the mental well-being of the groups at the beginning of the study, to the mid-point and to the end-point.

Here’s what we found

New dog owners felt less lonely after they got a dog compared to the other two groups. The effect happened quite quickly, within three months of acquiring a dog. There was no further decrease in loneliness between three months and eight months.

Aww. The joy of a new dog eased loneliness within the first few months. from www.shutterstock.com

We also found some evidence that dog owners had fewer negative emotions, such as nervousness or distress, within three months of getting a new dog but this finding was not as clear cut.

We found that symptoms of depression and anxiety were unchanged after acquiring a dog. Maybe the dog owners in our study already had low levels of psychological distress before they got a dog, so dog ownership didn’t lower these levels any further.

What does it all mean?

Dog owners may also meet new people through their dog as people are more likely to talk strangers if they are accompanied by a dog. In our study, dog owners also said they had met new people in their neighbourhood because of their dog.

So far, there have only been two similar studies to look at mental well-being in new dog owners, one of which was conducted almost 30 years ago.

Of these studies, one found dog owners had fewer symptoms of psychiatric disorders after they acquired a dog. The other study found no difference in loneliness after people brought a new dog home.

Dogs may also improve our physical health, by reducing blood pressure, improving cardiovascular health and increasing the amount of physical activity their owners perform. But, as is the case with mental well-being, the scientific evidence is still limited.

So, what happens next?

Our next step is to look at mental well-being in a much bigger group of new dog owners to confirm these findings. A bigger study could also provide more insight into the relationship between dog ownership and mental illness, such as depression and anxiety.

If Dr Google Is Making You Sick With Worry, You May Have Cyberchondria