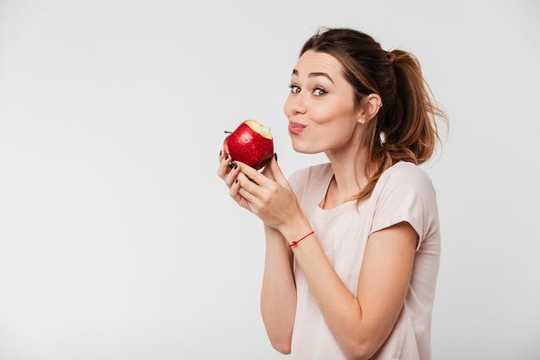 Spending a lot more time in your house doesn’t have to make you any less curious about the world around you. Just look inside your kitchen cupboards and there’s a wealth of chemistry just bursting to get out. Here are some surprising facts about the food you eat: including how bees used M&Ms to create some very interesting honey, what links spinach and kidney stones, and how a wax from a beetle native to Asia makes you want to eat your apple more.

What makes honey solid or runny

Worker bees collect nectar, which is predominately made up of sucrose – the same chemical you might sweeten your tea or coffee with. They convert this “double sugar” disaccharide via enzymes they produce in their salivary glands into smaller units like glucose and fructose, which are single sugars called monosaccharides.

The chemistry of it all. Author provided

The colour of honey is one of the most important quality criteria for consumers, ranging from almost colourless to a really dark brown, and flavours varying from incredibly subtle to distinctly bold. The colour depends mainly on the content of plant pigments from the huge array of flowers the bees have been collecting their nectar from. But the exact amounts of proteins, carbohydrates, amino acids, vitamins, minerals, antioxidants and water along with the shape and size of the sugar crystals can also influence colour too. Generally, paler honeys are milder in taste and this also depends on where the bees buzzed. 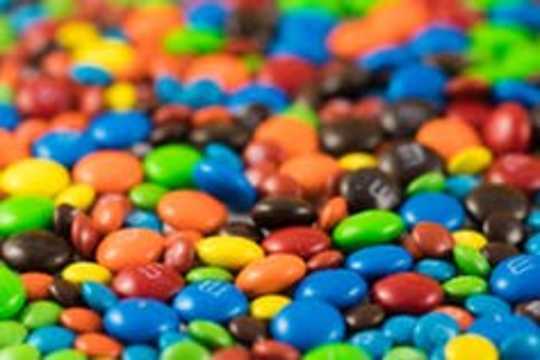 Bees could technically produce any colour honey you wanted. A few years ago, bees foraging by a Mars processing plant started to produce thick blue/green honey. Their food source was traced back to a sugary solution used to make M&Ms, which was being processed at the plant. Sadly, the new colour never caught on.

Your jar of honey will have a best before date, but in reality honey never really goes off. The low water content means bacteria find honey too hostile to grow in and they’ll soon become dehydrated – the honey literally sucks the water out of the bacteria.

Have you noticed if you leave a slice of bread for a few minutes dolloped with a generous topping of honey, it starts to become concave? Bread contains about 40% water and it’s drawn out and into the honey by osmosis – whereby water molecules move from where they are in higher concentration to where it is lower via a partially permeable membrane. Removing the water makes the bread shrink, but only on the side in contact with the honey so your bread will bend. It doesn’t work if you apply butter to your bread first, though, as that acts as a barrier.

Honey has a pH between 3.5 and 5.5 because acids such as formic acid, citric acid and gluconic acid are present. An enzyme called glucose oxidase catalyses the conversion of glucose to gluconolactone, which yields gluconic acid and hydrogen peroxide – and all these compounds aren’t favoured by bacteria.

The overabundance of sugar makes honey unstable and this leads to glucose, with its lower solubility, forming crystals over time. Honey naturally higher in glucose will crystallise more rapidly and generate set honey. Nectar collected from sunflowers, dandelions, lavender and oilseed rape will crystallise quicker as they contain higher levels of glucose. Fructose is more soluble in water so will remain as a liquid. So honey higher in fructose collected from plants such as cranberry, sage and acacia can stay as a liquid for years. Seeing how readily sugar crystalises can be easily demonstrated.

Experiment: if you make some caramel at home, add a small amount of lemon juice to your sugar solution. This will break down the sucrose into the smaller sugars and will prevent crystallisation and your caramel won’t be grainy. 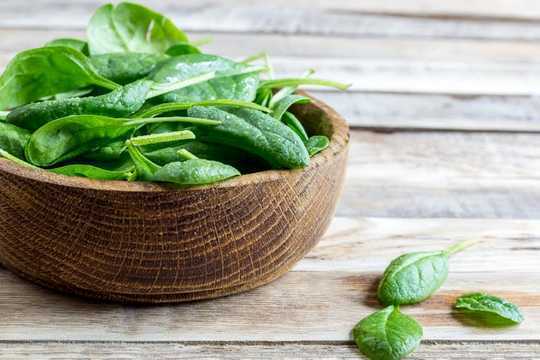 Oxalic acid is a naturally-occurring acid which when eaten, passes through your body unabsorbed. Vitamin C can transform into it, we create it in our liver and our red blood cells synthesise it from glyoxylate – an intermediate species of the glyoxylate cycle which allows organisms to convert fatty acids into carbohydrates. We can also eat it, as it’s found in a variety of different foods including green leafy vegetables, nuts, seeds, most berries and soy products.

Spinach contains a particularly high level of oxalic acid; about several hundred milligrams per 100g serving. Oxalic acid is usually contained within little pockets in the cell walls of the spinach but when these are ruptured by either being boiled or chewed, the cell walls break and the contents leak out.

A healthy gut contains Oxalobacter formigenes, an anaerobic bacterium found in the large intestine that breaks down oxalic acid, but there is a limit to how much the body can excrete. If too much is absorbed, some will be stored and if there is an excess, our kidneys produce urine with a higher than usual concentration of oxalic acid. When combined with high levels of calcium in the urine, this increases the risk of kidney stones, made up of calcium oxalate crystals.

There are some chemicals in urine which inhibit calcium oxalate crystals from forming. But if these inhibitors are depleted, or they’re overwhelmed by calcium oxalate and can’t cope, a “seed” is formed within the kidney tissue and this acts as a binding site onto which more calcium oxalate is deposited. Once large enough, they can detach themselves from the kidney walls, forming a kidney stone.

The furry mouth you experience when you chew spinach is related to this. Spinach contains calcium, as does your saliva. This combines with the oxalic acid crystals in spinach’s cell walls and deposits calcium oxalate-rich plaque on your teeth. As this is insoluble, you feel this as a chalky deposit in your mouth.

The presence of oxalic acid decreases the ability to absorb vital minerals from foods – despite containing almost the same amount of calcium by weight, you absorb five times more calcium from milk than you do from spinach because in spinach, much of the calcium forms insoluble substances.

Some people are more predisposed to having excess oxalic acid in their bodies than others. Genetic variations, people who don’t consume enough water, those who are deficient in vitamin B6 or have an excess of glycine increase their risk of developing kidney stones.

Simply rotating or mixing spinach with lower-level oxalate-containing foods will cut the risk of kidney stones. Most people can consume about 200mg of calcium oxalate per day safely. And if you want to avoid eating large amounts of oxalic acid, boil spinach and discard the water, rather than steaming, which only reduces the oxalic acid by half that much. But it’s definitely a trade off because by doing this, you discard lots of important nutrients too.

How fruit gets its shine 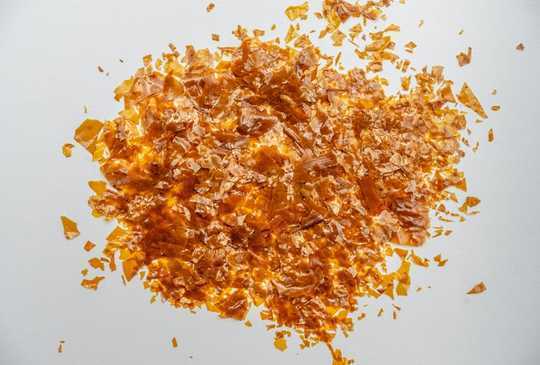 Fruit and vegetables produce their own natural waxy coating, called the cuticle. It’s their barrier to the outside world, keeping moisture in and water out. But some of the fruit and vegetables we buy in the supermarket have this wax removed, simply because it doesn’t look “perfect”.

When the produce is washed, it’s not just the dirt that’s eliminated. Its protective envelope is stripped off too and another one has to be applied. This new wax minimises moisture loss and prolongs shelf life. It’s also purely for cosmetic reasons because a shiny apple looks more appealing than a dull one. The composition of these coatings is usually a closely guarded secret but they’re chemically very similar to the coatings on some common sweets.

One such product that’s applied to give a high shine is carnauba wax. It originates from the leaves of the Copernica prunifera, a palm tree grown only in Brazil. The wax is beaten off the dried palm fronds, refined and bleached. It is a complex mixture of chemicals and is also common in many cleaning products. It’s found in shoe polish, car wax, surfboard wax and furniture polish, giving a high gloss shine to surfaces.

It’s also found in mascara, lip gloss, eyeliner, lipstick, foundation, eye shadow, moisturisers and sun creams. Open up a bag of Skittles and it provides their shiny coating too.

Another common wax is shellac. No, it’s not a plastic – it’s another naturally occurring resin but comes from an unlikely source. A bug native to Asia called Kerria lacca, or the lac beetle, holds the answer. The female lac beetle sucks the sap of the host tree and secretes a wax which forms protective tunnels. The wax is purified by soaking in sodium carbonate and dried to produce shellac. 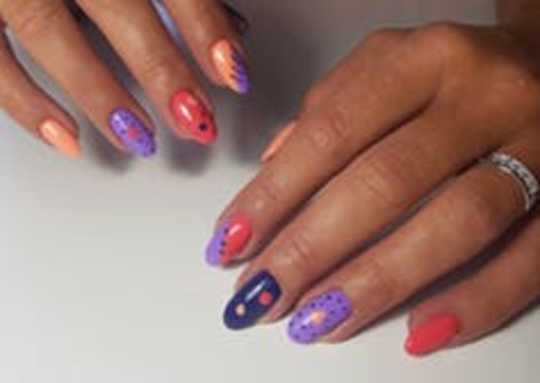 The exact chemical composition of shellac is unknown (it’s a polyester-type of resin, formed from certain acids called hydroxy acids and sesquiterpene acids) and it’s the primary ingredient of the “french polish” that’s used to give wood a high shine.

It’s also commonly found in paint primers to give an even and professional finish. Due to its durability, shine and water-repellent properties, shellac is now the chief component in many fake nails. But this same beetle secretion is also what gives Jelly Beans their glossy coating. Don’t be appalled – these waxes are perfectly safe for us to eat.

The next time you eat a piece of fruit, take a moment to examine the surface and decide whether you think it still has its cuticle intact or has had its natural coating stripped and another one applied.