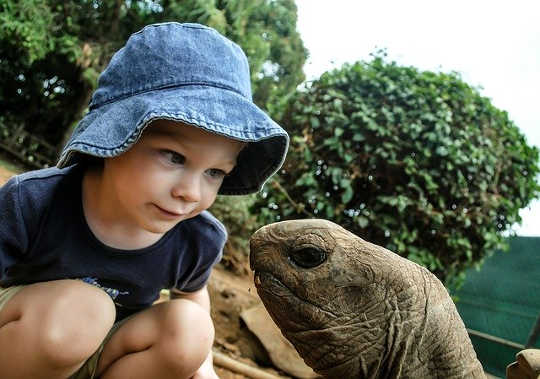 If you’re reading this, there’s a good chance you’ve heard of animal communication. You may have even asked an animal communicator to work with your animal, and it’s changed how you think and the way you interact with animals.

For humans, connecting with an animal is somewhat out of the ordinary. It is definitely not instinctive or a survival tool that we need. As so few people do it consciously, it is considered strange by some. To those who have been practicing it for years, though, it seems perfectly normal. Is it not natural to listen when someone speaks to us? Why then is it so hard for us to listen to animals? Could it be that we see them as a lower species or of a lower mind?

The moment you accept the possibility of animal communication, and that everything is composed of energy, you cannot be the same person you were before. A shift occurs, and your vibratory level changes. Your interaction with animals changes, sometimes without your even being aware of it, and you also become more intuitive and empathic toward the whole of humanity. That is what animals teach us.

From Skepticism To An Incredible Journey

I believe that each of us is unique, and that our interests in life are often reflected in our work. I’m extremely fortunate in that my way of life has become my work. I have always been both interested in the more spiritual side of life and also a skeptic, and ironically, it was my skepticism that led me to my current occupation. In fact, I initially set out to prove that animal communication was impossible.

Yet I was fascinated. If it were possible, then could I talk to my own animals? How amazing would that be? Having been an animal lover all my life, talking to my animals was one of the top ten things I could possibly wish for. Luckily for me, my wish was granted, and it has led me on one of the most incredible journeys I could ever have undertaken.

For many years after I first learned how to communicate with animals, I followed certain visualization techniques to get me into a relaxed state. Then I would begin the process of connecting, literally going through it step by step in my mind until I felt a heart connection. Sometimes I would simply know that I had connected, and at other times my heart would actually physically ache and I would get teary at the overwhelming sense of love I experienced.

Over time things got much easier and I began to follow the path of least resistance, which lay in not overthinking anything. Then one day I realized I had come a full 180 degrees and could not remember the last time I had done the “steps.” By then, things pretty much happened naturally.

The next step of my journey took me backwards in time to my early twenties, when I discovered gardening. I began with the usual flower gardening, progressing to vegetables and then to herbs. Only years later did I realize that this was my soul time and a brilliant outlet from stress. I inherited my green fingers from my grandmother and my mom, who also loves gardening. It’s something I will always be thankful for, as it’s brought me so much pleasure. I am at my happiest when I’m barefoot and surrounded by plants and my animals.

Moving forward again, after practicing animal communication for a while, I felt I needed to do more. I struggled for years to find something that complemented animal communication, experimenting with different treatments, such as Bach flower remedies and tissue salts. They did work, but they didn’t give me the powerful results I was looking for.

One day I had just finished teaching a workshop in Johannesburg and was browsing a bookstore at the airport, looking for something to read on the plane. I bought a book by Elizabeth Whiter called The Animal Healer. In it she spoke of her journey of discovery and zoo-pharmacognosy. It was what I had been unconsciously searching for. Zoo-pharmacognosy facilitates the process that allows animals to self-select their own remedies. It gave me the results I had been searching for, and more, taking me full circle to playing with plants again.

I went on to study Applied Zoopharmacognosy with Caroline Ingraham in England. As time went by, I started to move past my self-imposed rule of doing readings by distance only, and I began to do readings in person. I would arrive to do a zoopharmacognosy session with an animal and then either the owner or the animal would start asking questions or deliver a message.

It got to the point where I couldn’t do an animal communication session without taking my plant extracts along, too, and vice versa. The two modalities complemented each other, and even more importantly, the animals really loved it and responded even better when I did both. The truth is, we all want to be heard and we all need healing in some form.

Remembering back to my initial visualizations when attempting to connect with an animal, I began to wonder what happens on an energetic level in both the human’s and the animal’s energy field. Was what I was visualizing in my mind’s eye actually happening, or was something totally different taking place?

The illustrations in Barbara Ann Brennan’s books, Hands of Light and Light Emerging, fascinated me. I have always enjoyed giving healing, and her illustrations seemed to prove that there was indeed something going on in certain levels of the body. And the more I wondered about it, the more I felt an overwhelming need to somehow find out what that was and then to document it.

Life sometimes gets in the way, though, and the idea was put aside for a while. Then one day, after I had spent several frustrating hours on the internet (yet again) doing research to try and understand what I had just seen in a session, I began to realize that there really was no information on the subject out there.

It was then that Melana came to mind. We had known each other for several years, attended some workshops together, and found that on psychic levels we picked up a lot of the same type of information, albeit in slightly different ways. Although I can see auras and read energetic information in my mind’s eye when doing a session, Melana can actually see energy fields, something I find fascinating and aspire to. So I wondered if she might be able to see what was going on.

An email later, and it turned out that Melana was just as curious as I was and willing to give it a go. Although I honestly had no expectations, I was in a place of nonattachment and wanted to satisfy my curiosity. So we set up a process whereby I went through my normal routine during a healing session, and she watched what happened energetically and noted it down. Often I would pick something up and be thinking about how to solve it and she had picked up the same thing.

It was great being able to get the same information and have it validated by a colleague. The information we uncovered was nothing like we had expected, and it took us completely by surprise. The rest is history and makes up the content of this book.

Often we are aware that something is not right with our  animals, but we’re not sure exactly what.  Gaining another level of understanding can bring in healing, whether you are doing it consciously or not.

As a small child, I often experienced the very real presence of Spirit in one form or another. Back then, I thought this was something that everyone “saw” or “knew.” I didn’t know that what I was seeing and feeling was auras and the movement of energy in the body. To me, it was always simply extra information about who someone was and how they functioned. Only much later did I learn that this ability is a “gift.”

During my teens this gift went dormant, and it was only in my twenties that my insatiable desire to understand the way the universe worked led me to rediscover it. I began to learn about auras and energy, but only truly experienced working with energy for the first time at a group healing event.

I can recall feeling the flow of energy as I placed my hands on someone, with no intention other than to send them love. Instead, I became aware of what they were feeling, both physically and emotionally. I started seeing not only lights, shadows, and glimmers around people but also those who had passed into Spirit. Although it was a frightening experience, it started my journey into the psychic and spiritual realms.

I realized I needed a way to control this flow of information, so I attended a psychic development workshop. There I learned how to communicate and co-operate with my guides, interpret the information I was receiving, and close down the ability at will. As you can imagine, this led to a lot of experimenting with my ability.

When Diane approached me to work with her and observe the processes that take place when there is intentional communication between an animal and a healer, I was immediately intrigued. I was also interested to learn more about another psychic's methods of communication, and to compare it to my own understanding.

Diane and I had worked on psychic exercises together in the past and received very similar information, so I thought there would be a natural synergy between us. This hunch was correct. I also found that eavesdropping on her conversations with the animals enhanced my own ability to hear and see, and explained a lot of what I found perplexing about this form of communication.

I was astounded by the detail of the information that we received, and to witness the way the remedies interacted with the animals was truly revealing and beautiful. I was also surprised by the insight these “domesticated” animals have into us as humans, and by their sometimes humorous and always accurate observations of our behavior and needs.

Doing this work truly is a privilege, and it has given me even greater respect for the “animal people” who share our planet and whom I have always loved.

Energy Medicine for Animals: The Bioenergetics of Animal Healing
by Diane Budd

Full of animal communication stories and ground-breaking research on animal energy fields, this book shows how, just as we humans are all here on this earthly plane to learn and grow, so are our animals. (Also available as a Kindle edition.)

More books on this topic

Diane Budd is a sought-after animal communicator and healer, serving to bridge the gap in understanding between animals and their human companions. She teaches workshops on animal communication, animal healing, and zoopharmacognosy and offers in-home consultations around Cape Town, South Africa. Author's Website: http://healinganimals.co.za/