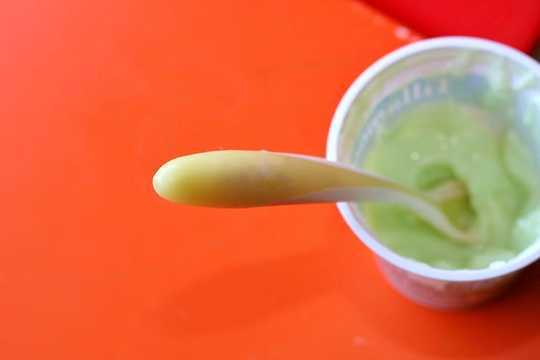 In our survey of yogurts sold in the UK, we found that less than 10% were low sugar – almost none of which were children’s yogurts. We also found that organic products, often viewed as healthier options, contained some of the highest levels of sugar.

Yogurt has many health benefits for all ages and this is partly due to “friendly bacteria” (probiotics) that help the intestines and immune systems. It is also a good source of protein, minerals and vitamins. Yogurt is particularly recommended for babies and children and, in fact, those up to the age of three years in the UK eat more yogurt than any other age group. But we are concerned that yogurts in the UK are laden with sugar, which is counteracting their health benefits.

We know that working out the sugar content of food can be confusing because government sugar recommendations for a healthy diet only refer to “free” (also called “added”) sugars, and food labels don’t distinguish between free and total sugars. But most of the sugar in high-sugar yogurts is free sugar, even for many fruit yogurts. Whole, unprocessed fruit does not contain free sugars and does not need to be counted when considering government recommendations.

We were concerned that yogurt was in the top nine food categories (after soft drinks, fruit juices and smoothies) that contribute the most to children’s sugar intakes. We wanted to find out how well individual yogurts, particularly those marketed to children, met UK and US dietary guidelines for low sugar, given the concern about high levels of sugar in our diets. To do this, we surveyed the 900 yogurts (after searching supermarkets online for “yogurt” or “yoghurt”) that were available at the five biggest online UK supermarket chains in October-November 2016.

We categorised the products as shown in the figure below and found that they varied enormously in sugar content, with clear differences within and between the chosen groups.

Unsurprisingly, desserts contained the most sugar, at an average of 16.4g per 100g. These were followed by products in the children’s, flavoured, fruit, and organic categories. In these categories, average sugars ranged from 10.8g per 100g in children’s products to 13.1g per 100g in organic products. This compares with an average of 5g per 10g for natural and Greek yogurts.

Low fat and low sugar were classified according to EU regulations: 3g or less of fat per 100g and 1.5g or less for drinks, and a maximum of 5g of total sugars per 100g. (This is the system currently used for food traffic-light labelling in the UK.) The sugar content of most types of yogurt was well above the recommended threshold, with children’s and organic yogurt being among the highest.

The average fat content was either below or just above the low-fat threshold. Desserts had the highest fat content and the broadest range, averaging 5.2g per 100g.

The fat content of yogurt is less of a worry than sugar as most products would not contribute a high proportion to the recommended daily intake of fat (on average, 97g for a man and 78g for a woman). Low-fat yogurts tended to have a lower calorie content, but the range overlaps with higher-fat yogurt.

We only surveyed products from five supermarket chains. Any low-sugar yogurts from other retailers would have been excluded. Nevertheless, yogurt may be an unrecognised source of sugar, particularly for young children, who eat a lot of it. We hope that as a result of this survey consumers will check the sugar content of a product before they buy it.

While yogurt may be less of a concern than soft drinks and fruit juices – the chief sources of free sugars in both children’s and adults’ diets – what is worrying is that yogurt, often perceived as a healthy food, may be an unrecognised source of sugar in the diet.

Getting into the habit of eating natural or Greek yogurt with fresh, whole fruit for sweetness would add no free sugar and would have the added benefit of contributing to the five a day recommendation for fruit and veg.