What Tailgating Parties Do To Men’s Bodies 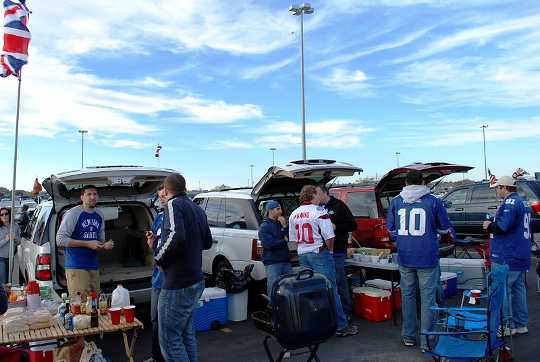 The heavy eating and drinking that go along with tailgating doesn’t affect all men the same way, new research suggests.

Researchers from the University of Missouri School of Medicine simulated a tailgating situation with a small group of overweight but healthy men and examined the impact of the eating and drinking on their livers using blood tests and a liver scan. They discovered remarkably differing responses in the subjects.

“Surprisingly, we found that in overweight men, after an afternoon of eating and drinking, how their bodies reacted to food and drink was not uniform,” says Elizabeth Parks, professor of nutrition and exercise physiology at the University of Missouri.

“In some people, the body responded in a unique way to take the stress off the liver. These findings reveal that both genetics and lifestyle can work together to protect us from overconsumption of nutrients.”

Parks studied 18 men who were given alcoholic drinks to elevate breath alcohol levels for five hours while they were provided hamburgers, chips, and cupcakes. The men ate an average of 5,087 calories, which increased their blood levels of glucose, insulin, and fats called triglycerides.

Despite all subjects maintaining breath alcohol levels of 0.08 to 0.10, nine men showed increased fat in the liver, five men showed a decrease in liver fat, and one man experienced no change at all. Unexpectedly, those with an elevated amount of liver fat drank 90% less alcohol and tended to eat more carbohydrates compared to the other subjects.

“A potential explanation of these findings is that high carbohydrate consumption may have a greater impact on liver fat than alcohol in some people,” Parks says. “Given the high prevalence of overconsumption of food and alcohol in the US, further studies are needed in a larger population. Our goal is to understand differences between people in how they respond to excess food and alcohol. It may be that limiting meal carbohydrates may protect the liver.”

The study appears in the journal Alcohol.

The University of Missouri provided funding for the study. The authors declare that they have no conflicts of interest related to this study.