Should Lab-grown Meat Be Labelled As Meat When It's Available For Sale? 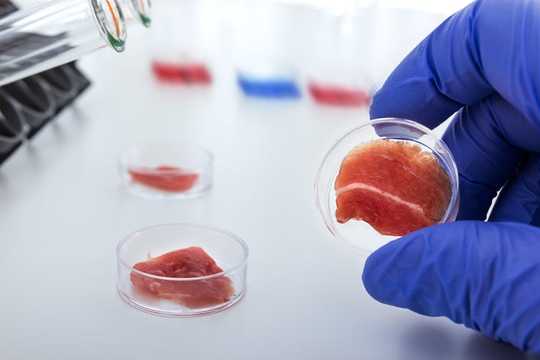 Australian regulators will soon be faced with a challenge: can animal flesh produced in a lab be called meat?

Amid reports that lab-grown meat could be on sale this year, the US Cattlemen’s Association (USCA) last month filed a petition to the US government advocating for a legal definition of “beef” and “meat”.

They want a definition that excludes “man-made” or “artificially manufactured products”. To be labelled as beef and meat, they argue, the product should be derived from “the tissue or flesh of animals that have been harvested in the traditional manner”.

This is the latest regulatory issue raised in relation to controversial emerging food technologies. From genetically modified (GM) and irradiated food to nanotechnologies, the contending views centre around the kinds of food systems we want, and the technological means we use to get there.

Like these other food technologies, labelling of lab-grown meat products is already proving contentious.

The rise of lab meat

Generally, companies that grow meat in the lab emphasise the “meatiness” of their future products, to appeal to consumers and food standards regulators.

(…) developing a way to produce real meat from animal cells, without the need to feed, breed and slaughter actual animals.

It is also common for startups for lab-grown product manufacturing to position animal tissue engineering as a type of farming, as opposed to a new process.

Supermeat, another silicon valley meat startup, refers to lab-grown meat as “clean meat”, which it says is no different from today’s rice, milk, tomato, meat and broccoli, adding:

All of the food products we know and love underwent some human intensive intervention, and without such, they would be impossible to consume.

Growing meat is a very different process from breeding and slaughtering animals. It begins with the submersion of stem cells from donor animals or embryos into a serum that is placed into a bioreactor. This serum is commonly from the fetuses of dead cows.

To engineer animal flesh from cells grown in the lab, a few techniques exist. For instance, 3D printers have the potential to print lab-grown meat that is not only multidimensional but also contains fat and blood.

Although technical barriers remain, the influx of investment into lab-grown meats and the projected price drop have buttressed claims that synthetic meat products will be on sale within three years.

Trade agreements will stop Australia rejecting imports of lab-grown meat without scientific justification. Australia will have to import lab-grown meat, and products such as “food ink” cartridges for 3D printers that contain synthetic meat.

But before we can eat our lab-grown meat and three veg, the Food Standards Australian and New Zealand Authority will have to perform public health and safety assessments on each different lab-grown meat product. As a “novel” food, lab-grown meat triggers requirements under our food standards code

In Australia, meat is defined as “the whole or part of the carcass if slaughtered” of “any animal”. This includes the usual suspects (cattle, pig and poultry), as well as any other animal that is allowed for human consumption under state and territories’ individual laws.

To use the word “meat” on a food label in Australia, the contents would have to satisfy this definition.

For ethical and market reasons, lab-grown meat companies would not want to satisfy that legal definition of “meat”. After all, being seen as “victimless” meat is a key selling point of lab-grown meat.

Some lab-grown products will contain part of a slaughtered carcass through the use of bovine fetal serum (derived from blood from a cow fetus). Synthetic meat using this serum could then satisfy the definition of the word “meat” and be labelled as such.

But companies using lab-grown meat that contains the blood of cow fetuses would also have to stay away from making victimless claims. These claims would arguably mislead consumers and breach consumer law.

When is milk, milk?

With the labels of lab-grown meat under close scrutiny by farming groups, it could still be politically risky to label lab-grown meat as meat, considering the push by dairy industries from the European Union, the United States and Australia to ban plant-based products from using the word “dairy” or “milk”, such as in almond milk or rice milk.

Equally, the term “meat-free” does not apply to lab-grown meat. Consumers would reasonably expect, at least initially, that a product labelled “meat-free” would contain no animal material.

Stuck between a rock and a hard place, lab-grown meat companies may have to opt for vague product names without the word “meat”, and clunky product descriptions, such as “muscle grown from animal-derived cells” or “biosynthesised cultured isolated cells from cow skeletal muscle”. Such non-natural-sounding descriptors may affect consumer acceptability and public trust.

Then again, the company name of the manufacturer is required on food labels in Australia.

Lab-grown meat companies have been careful to include “meat” in their (often trademarked) names including MosaMeats, SuperMeat and Memphis Meats. The use of such company names on lab-grown meat labels could infer to consumers that lab-grown meat is the same as traditional meat without raising any legal issues.

Given that some groups within Australia may have a commercial interest in undermining consumer acceptance of lab-grown meat, it is all the more important to discuss the labelling of lab-grown meat out in the open – that is, within a regulatory process that is transparent and participatory.

The current institution and process for setting food labelling standards in Australia is, however, highly criticised. Meanwhile, farmers remain a trusted group for the general public of Australia, giving the edge to traditional meat products.

Lab-grown meat is positioned as the solution to food insecurity and the harms caused by industrial agriculture including its high greenhouse gas emissions.

Certainly, some empirical works support the claim that lab-grown meat will be far less resource intensive and polluting than intensive animal agriculture.

But some are already casting doubt, or at least presenting a more realistic perspective, on the environmental benefits of lab-grown meat.

Culturing meat in bioreactors is more energy-intensive than the production of other plant-based meat substitutes and the production of smaller animals (such as chickens). Meanwhile, the environmental impact of producing the materials required to feed cells is unclear, as is the amount of waste produced during the process.

So what’s on the label?

Clear prohibitions on the labelling of lab-grown meat as “meat” are likely to appeal to many sides, except perhaps the lab-grown meat companies themselves.

For some, synthetic meat falls decidedly into the “frankenfood” column, and mainstream media coverage strongly plays into these feelings. The growing preference for unprocessed, whole foods may drive demand for laws that require labels to distinguish between meat and synthetic meat.

For others, especially carnivores, lab-grown meat promises to reconcile the tension between wanting to eat meat without contributing to the harms caused by intensive livestock systems.

n contrast to the US Cattlemen’s Association, the Meat and Livestock Association of Australia frames 3D-printed meat as an opportunity to increase the price of real beef products.

As Tom Stockwell, a cattle producer and outgoing president of the Northern Territory Cattlemen’s Association, said:

(…) it makes the targeting of higher-value markets and using our natural grazing practices more appealing.

We can expect lobbying in Australia for mandatory labels that differentiate between lab-grown products and meat over the next few years. But, unlike in the US, this lobbying is less likely to resist lab-grown meat being labelled as meat, and more likely to focus on letting consumers know whether their meat was lab-grown or farm-produced.