Being An Omnivore Is Actually Quite Odd 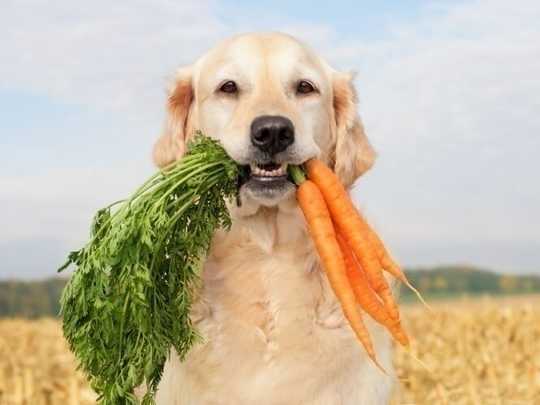 The first animal likely was a carnivore, new research finds. Humans, along with other omnivores, belong to a rare breed.

What an animal eats is a fundamental aspect of its biology, but surprisingly, the evolution of diet had not been studied across the animal kingdom until now.

The study is a deep dive into the evolutionary history of more than one million animal species going back 800 million years.

The researchers scoured the literature for data on the dietary habits of more than a million animal species, from sponges to insects and spiders to house cats. They classified a species as carnivorous if it feeds on other animals, fungi, or protists (single-celled eukaryotic organisms, many of which live on bacteria). The researchers classified species as herbivorous if they depend on land plants, algae, or cyanobacteria for food, and omnivorous if they eat a mixture of carnivorous and herbivorous diets.

The scientists then mapped the vast dataset of animal species and their dietary preferences onto an evolutionary tree built from DNA-sequence data to untangle the evolutionary relationships between them. 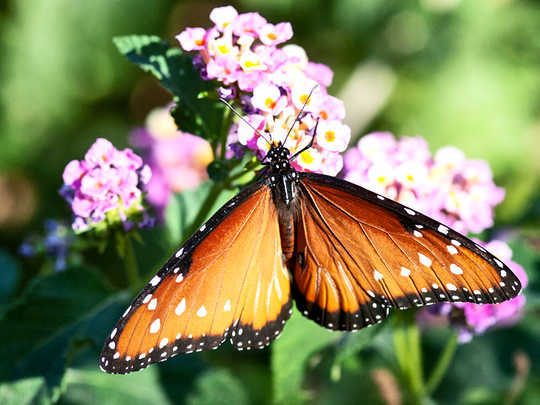 Insects are a group in which feeding on plants increases rates of species proliferation, including among the butterflies and moths, which are almost all herbivorous. (Credit: Daniel Stolte/U. Arizona)

“Ours is the largest study conducted so far that examines the evolution of diet across the whole animal tree of life,” says lead author Cristian Román-Palacios, a doctoral student in the ecology and evolutionary biology department of at the University of Arizona. “We addressed three highly-debated and fundamental questions in evolutionary biology by analyzing a large-scale dataset using state-of-the-art methods.”

All species can be classified according to their evolutionary relationships, a concept that is known as phylogeny. Organisms are grouped into taxa, which define their interrelationships across several levels. For example, cats and dogs are different species but belong to the same order (carnivores). Similarly, horses and camels belong to a different order (ungulates.) Both orders, however, are part of the same class (mammals).

On the highest level, animals are classified in phyla. Examples of animal phyla are arthropods (insects, crustaceans, spiders, scorpions, and the like), mollusks (snails, clams, and squid fall into this phylum), and chordates, which include all animals with a backbone, including humans.

The survey suggests that across animals, carnivory is most common, including 63% of species. Another 32% are herbivorous, while humans belong to a small minority, just 3%, of omnivorous animals. 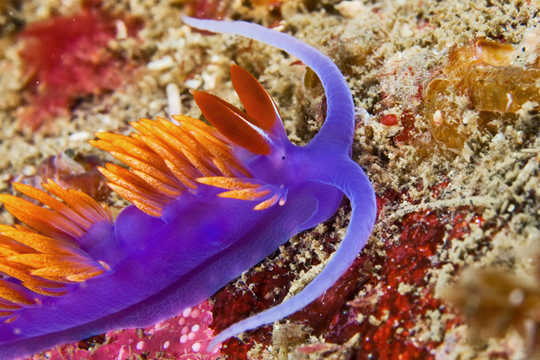 Unlike many of their land-dwelling kin, many so-called sea slugs such as this Spanish Shawl are carnivorous snails that prey on polyps, sponges or even each other. (Credit: Daniel Stolte/U. Arizona)

Tracing the evolution of eating meat

The researchers were surprised to find that many of today’s carnivorous species trace this diet back all the way to the base of the animal evolutionary tree, more than 800 million years, predating the oldest known fossils that paleontologists have been able to assign to animal origins with certainty.

“We don’t see that with herbivory,” says corresponding author John Wiens, a professor of ecology and evolutionary biology. “Herbivory seems to be much more recent, so in our evolutionary tree, it appears more frequently closer to the tips of the tree.”

So if the first animal was a carnivore, what did it prey on?

The authors suggest the answer might lie with protists, including choanoflagellates: tiny, single-celled organisms considered to be the closest living relatives of the animals. Living as plankton in marine and freshwater, choanoflagellates are vaguely reminiscent of miniature versions of the shuttlecock batted back and forth during a game of badminton.

A funnel-shaped collar of “hairs” surrounds a whip-like appendage called a flagellum whose rhythmic beating sucks a steady stream of water through the collar, filtering out bacteria and detritus that is then absorbed and digested. It is possible that the common ancestor of today’s animals was a creature very similar to a choanoflagellate.

“The ancient creature that is most closely related to all animals living today might have eaten bacteria and other protists rather than plants,” Wiens says. 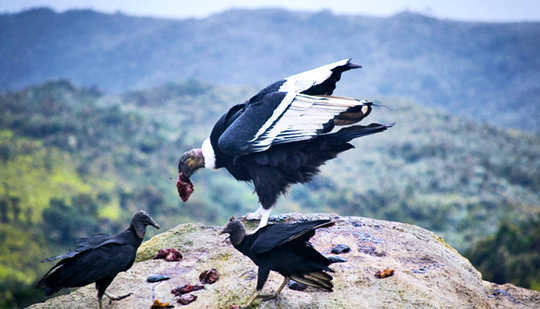 Turning to a plant-based diet, on the other hand, happened much more frequently over the course of animal evolution.

Herbivory has traditionally been seen as a powerful catalyst for the origin of new species—an often-cited example is the insects, with an estimated 1.5 million described species the most diverse group among the arthropods. Many new species of flowering plants appeared during the Cretaceous period, about 130 million years ago, and the unprecedented diversity of flowers is widely thought to have coincided with an increase in insect species taking advantage of the newly available floral bounty.

“This tells us that what we see in insects doesn’t necessarily apply to other groups within the animal kingdom,” Wiens says. “Herbivory may go hand in hand with new species appearing in certain taxa, but it clearly is not a universal driver of new species.”

The study also revealed that omnivorous (“eating everything”) diets popped up rarely over the course of 800 million years of animal evolution, hinting at the possible explanation that evolution prefers specialists over generalists.

“You can be better at doing what you do if that is all you do,” Wiens says. “In terrestrial vertebrates, for example, eating a diet of leaves often requires highly modified teeth and a highly modified gut. The same goes for carnivory. Nature generally seems to avoid the dilemma of being a jack-of-all-trades and master of none, at least for diets.”

This need for specialization might explain why omnivores, such as humans, are rare, according to the authors. It might also explain why diets have often gone unchanged for so long.

“There is a big difference between eating leaves all the time and eating fruits every now and then,” Wiens says. “The specializations required to be an efficient herbivore or carnivore might explain why the two diets have been so conserved over hundreds of millions of years.”

The study appears in the journal Evolution Letters.