What Happens In Our Bodies When We Sleep? 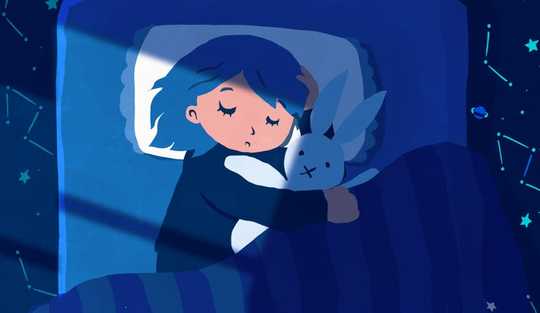 Does our body “switch off” when we sleep? Mami Kempe / The Conversation, CC BY-ND

Most of us might think sleep is like a light switch. That is, we go to bed, shut our eyes, and our body “switches off”. Then, when we open our eyes and wake up in the morning, we are “switching on” for the day.

But that is not true. There are changes that happen in our body during the night when we sleep.

The most interesting part of our body that changes during sleep is our brain. We know this because people have been measuring how active our brain is during sleep since the 1950s. They have done this by gluing small circular pieces of metal attached to wires (known as electrodes) to our head and near our eyes. These electrodes have shown that when we sleep, our bodies do not “switch off”. In fact, there are many things that our brain and eyes are doing.

Electrodes measure the waves produced by our brains. When we are awake, there are lots of these waves, but they are really small. So lots of tiny waves mean there is a lot of activity in our brains. Also, when we are awake, our eyes are moving around and looking at things - left and right, up and down, and all over the place.

When we shut our eyes to fall asleep, we begin to relax and fall into a very light sleep, which has been called “stage one” sleep. Our eyes begin to move left and right, back and forth, very slowly, many times, and very smoothly. It’s called “slow rolling eye movements” - and it’s something we cannot do when we are awake. During stage one sleep, our brains start to produce slightly bigger waves, and fewer of them.

Next is “stage two sleep”, which is a slightly deeper sleep than stage one sleep. There’s not much that is special about what our eyes are doing, but there’s a special wave that our brain makes called a “sleep spindle”. It’s a bit like the brainwaves seen in stage one sleep, but short, sharp and shiny.

The next stages of sleep are deep ones, and they are called stage three and four sleep. These stages are really deep, and really hard to wake up from. The brainwaves become really big - like those ones you might have seen at the beach.

Finally, one of the most interesting stages of sleep is called “REM sleep”. REM stands for Rapid Eye Movement - so it means our eyes are moving all over the place during sleep - like when we’re awake. And our brainwaves are very similar to when we’re awake. But it’s during REM sleep that we dream.

Our brains move through the different stages of sleep - from one, two, three, four and then back to REM sleep. We go up and down through these stages all night, until we wake in the morning.