Why Synthetic Chemicals Seem More Toxic Than Natural Ones 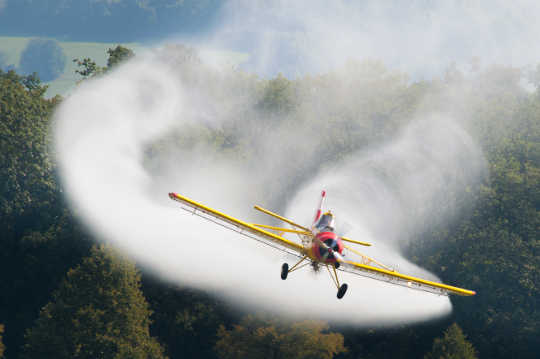 Many people believe that chemicals, particularly the man-made ones, are highly dangerous. After all, more than 80,000 chemicals have been synthesised for commercial use in the United States, and many have been released into the environment without proper safety testing. Should we be afraid of the synthetic chemicals that permeate our world?

While it is not possible to compare the toxicity of all natural and synthetic chemicals, it is worth noting that the five most toxic chemicals on Earth are all naturally found. When it comes to pesticides, some of the newer man-made versions are remarkably safe to humans; and at high doses, these pesticides are as toxic as table salt and aspirin. Rats continually exposed to low doses of these pesticides (ie, doses found in the environment) don’t develop cancer or problems in growth and reproduction. There are many natural pesticides that are produced by plants, some of which are also carcinogenic, and although this does not make synthetic pesticides safe, it does remind us that simple oppositions between ‘safe and natural’ and ‘deadly and synthetic’ are not helpful ways to analyse risk.

I study toxicology: I look at the effects of substances on living organisms. All substances (natural and artificial) are harmful if the exposure is high enough. Even too much water consumed within a very short time can dilute the salts in the blood, and cause brain cells to swell. A number of marathon runners have collapsed and died because of consuming excessive amounts of water with no salt.

Toxicologists believe that nearly every substance is safe in certain amounts. Take the example of botulinum, the most poisonous substance on Earth. Just 50 grammes of the toxin spread evenly worldwide would kill everyone. But, in very minute amounts, it is safely used for cosmetic purposes in Botox. Thus the adage ‘the dose makes the poison’.

Apart from understanding what doses make a substance ‘safe’ or ‘unsafe’, toxicologists also love figuring out how a substance causes a harmful effect. How exactly does smoking cause lung cancer? Once we find a mechanism through which chemicals in smoke cause cancer (and we have), we can be more confident about smoking’s role in lung cancer.

Merely showing that smokers have a higher rate of cancer isn’t evidence, since it is easy to find two factors whose patterns correlate. Look at the graph below: it shows that higher rates of divorce in Maine correspond to a higher per-capita consumption of margarine:

While we wouldn’t think that this graph proves anything, we are less likely to question correlations that might seem more plausible. For example, the graph below shows that higher exposure to mercury through vaccinations corresponds to higher rates of autism: 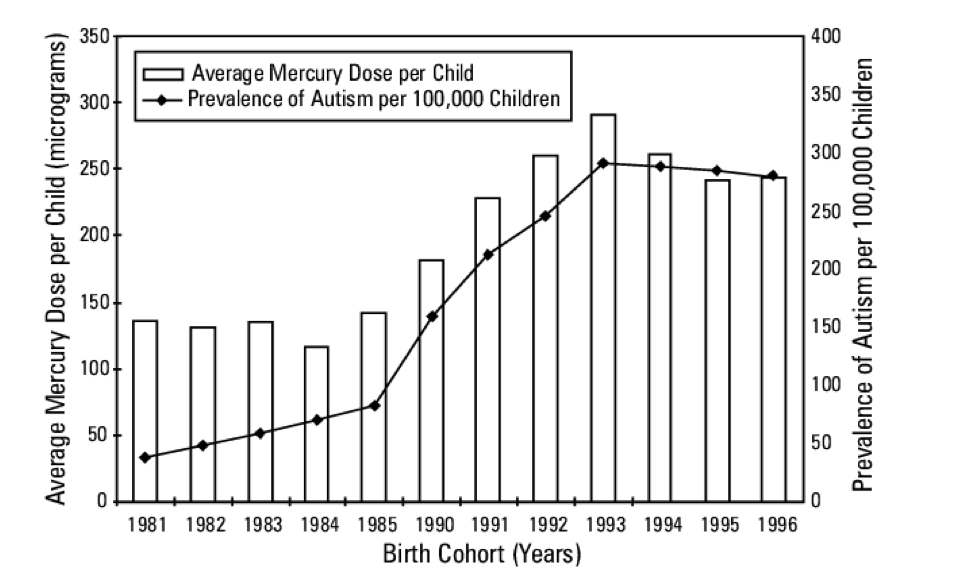 Causal link can be established in two ways: by showing how a chemical can cause a certain effect or by fulfilling a set of conditions called Hill’s criteria. Hill’s criteria requires that we consistently find a correlation between the chemical and effect in different populations, that the effect only shows up after chemical exposure and, if lab studies are conducted, we should obtain similar correlations between chemical and effect.

One can argue that, though there is no conclusive evidence presently to show that some chemicals cause health problems, it’s better to be safe than sorry and so restrict the chemical before health problems emerge. Yet while this idea is tempting, it ignores a basic truth: risk exists in nearly everything. Walking outside (we could get mugged), travelling in cars and planes (we could crash), eating food (we could ingest plant oestrogens or the organic pesticide copper sulphate) or drinking water (parts of the US and Bangladesh have high levels of naturally occurring fluoride and arsenic, respectively). We therefore need to understand probability: is the chemical exposure high enough for a high probability of adverse effects? We also need to know the risks of using an alternative chemical – or no chemical at all.

Studies have shown that people vary widely at ranking risks. Below is a snapshot of how the general public and experts ranked risk in 1979 (where 1 is the riskiest, and 30 the least risky). 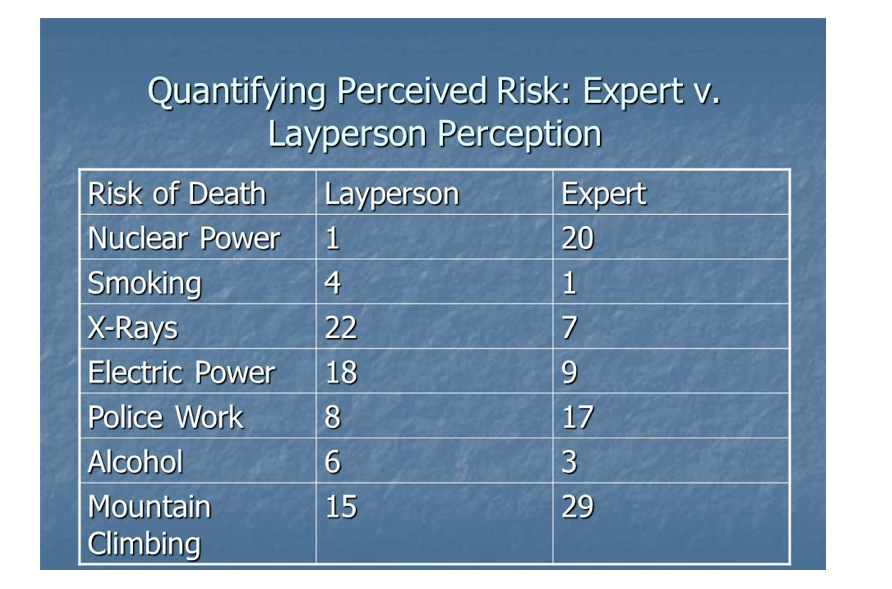 It seems that laypeople rank risks that receive more media attention or have more vivid imageries higher than the more commonplace risks. Today, the public perceives a higher health risk from genetically engineered crops than experts do.

So while it is good to strive for the lowest possible risk, it is important to also consider any benefits, and not disallow things merely because of the risk they pose. The following examples explain this reasoning:

* Wind turbines kill birds and bats, dams kill fish, and the manufacture of solar cells exposes workers to dangerous chemicals. But how do those risks compare with the risks of global warming and respiratory illness through continued use of fossil fuels? Do the benefits of replacing fossil fuels outweigh the risks of developing alternative energy sources?

* Birth control pills are very effective in preventing unwanted pregnancies and thus lessen our burden on the planet’s resources. But their use leads to increased hormone levels in streams and rivers, and the feminisation of male fish and decreases in fish populations.

* The insecticide DDT (now banned in most countries worldwide) caused several bird populations to crash. Yet prior to its ban, when safer alternatives did not exist, it saved millions of human lives by preventing diseases such as malaria and typhus.

Regulators partly decide whether to allow a certain chemical into the marketplace by tallying up its costs and benefits. This can seem crude. For example, the US Environmental Protection Agency (EPA) values a human life at nearly $10 million. Thus, if a pesticide has a one in a 100,000 chance of causing a neurodegenerative disorder in people who apply it, and 1 million agricultural workers could be exposed to it, then the benefit of not registering the pesticide is $100 million (as 10 people will be protected by this decision). Unless the cost of reducing pesticide exposure to the workers exceeds $100 million, it is unlikely to be registered.

The EPA has been analysing the safety of chemical pesticides for many years, and it recently began analysing the safety of the other chemicals it regulates. Nevertheless, there are several uncertainties when it comes to understanding the toxicity and risks of any chemical. Regulators try to deal with it by using margins of safety. This means that if x dose of a chemical is found safe in rats, then only doses that are at least 100- or 1,000-fold lower are considered safe in humans. However, this doesn’t guarantee that we are exposed only to safe levels of chemicals, and toxicologists don’t always look for effects – such as disruption of hormonal functions – that manifest only at low doses.

Also, concerns about long-term exposure to a mix of chemicals are valid as this is rarely tested in the lab. (One Danish study found that the average adult’s risk from consuming different pesticides in food is similar to the risk of drinking one glass of wine every three months. However, this is far from a comprehensive analysis.)

Ultimately, though risk and uncertainty exist on all sides, people seem to be averse only to certain kinds of risks. And while we should undoubtedly work to reduce harmful chemical exposure and come up with safer alternatives, we also need to realise that our excessive phobia of chemicals, particularly synthetic ones, can often be unwarranted.

Niranjana Krishnan is a PhD candidate in toxicology at Iowa State University.