A Lesson in Love and Acceptance from Morris the Cat 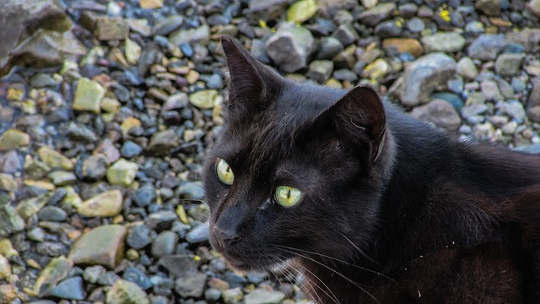 For two years Morris came and went. My daughter, Lauren, thought he was a stray cat gone wild who had probably been on his own for most of his life.

Lauren owned a house on an acre of land with hundreds of trees and berry bushes. We lived there in adjoining apartments. Lauren’s side of the house had three outside doors, while I had one front door and an inside door connecting our apartments.

Whenever stray cats came to one of my daughter’s doors, she took them in and kept them or found them homes. There were so many! But Morris dared only to come near Lauren’s door after she left food outside and went back in, closed the door, and remained out of sight.

Unbelievably, about six months after Morris first ap­peared at Lauren’s door, he started to appear at my door instead. You have to know that all my life I’d had a cat phobia. Cats terrified me so much that I had recurrent nightmares about a cat jumping from a tall staircase and landing on the back of my neck.

A friendship grew between us. After several months, I could bring myself to pet him, and he brought himself to let me. At some point, he learned to trust me enough that he would come into my front hall for a few seconds, then panic and run out. I started to leave the front door wide open so he could escape. We tamed each other.

Little by little, Morris began to stay inside for lon­ger periods of time and allow me more physical contact through petting and stroking. Then one day he accepted my house as his home, but only when he wanted to come in. Morris was still a free agent, coming and going as he pleased, yet he was my cat. During the nights he always stayed out.

One evening I was standing on a chair to change a lightbulb in the bathroom. I fell onto the edge of the bathtub, broke seven ribs, and had to stay in the hospi­tal for ten days. During this time my daughter never saw Morris, not even once.

The morning I came home from the hospital, there was Morris, sitting on the front path waiting for me. Still in pain, I couldn’t climb the stairs, so I slept on the couch.

In about a month, I was able to go upstairs and sleep in my bed. Each night, Morris wanted to come in and sleep with me, but I wouldn’t let him. We’d have a race for the bedroom door, and each time I “won.” It was a great disappointment to him, and the resigned Morris slept outside my door.

I had always let dogs sleep with me, but never cats. I wouldn’t sleep with a cat. Somehow, I just couldn’t let the idea go.

On the night that turned out to be the last time Morris would try to get into my room, he almost made it into my bedroom before I closed the door on him. But this time, instead of sleeping outside my door, as he had every night before, Morris went downstairs and howled at the interior door to Lauren’s apartment.

That was the last night Morris would be refused entry into my room. It was the last time we ever saw him. He was gone — simply gone. We never knew what happened to him.

The Blessing of Morris the Cat

I have wondered if Morris was an angel, his mission to be responsible for me. Maybe he’d been granted only a certain length of time to be with me, hence his need to sleep in the same room. And I wouldn’t let him. There are many times when I think of how hard he tried to enter my bedroom, and I want to apologize to my feline friend, saying, “Oh, how I want you, Morris, the blessing of you.”

Now I try to honor what only he could teach me. I pick up cats and hold them on my lap, giving them the love and comfort they need and deserve. Morris over­came his fear of human company and touch; he showed that when we accept each other with unconditional love, there is no room left for fear.

Click Here For More Info or to Order This Book on Amazon.

About the Article's Author

Gloria Wendroff, is the author of HEAVENLETTERS - Love Letters From God. Gloria, a teacher of English and business communication, grew up without religion or thoughts about God. Today Gloria receives and sends out Heavenletters every day, gives Godwriting workshops, works on her next book, How to Godwrite, and makes CD's -- all with an ear to the Still Small Voice and bringing earth closer to Heaven. Visit her website at www.heavenletters.org

Dr. Bernie S. Siegel, a sought-after speaker and media presence, is the author of many bestselling books, including Peace, Love and Healing: 365 Prescriptions for the Soul; and the blockbuster Love, Medicine & Miracles. For many, Dr. Bernard Siegel—or Bernie, as he prefers to be called—needs no introduction. He has touched many lives all over the Planet. In 1978, he reached a national and then international audience when he began talking about patient empowerment and the choice to live fully and die in peace. As a physician who has cared for and counseled innumerable people whose mortality has been threatened by illness, Bernie embraces a philosophy of living and dying that stands at the forefront of the medical ethics and spiritual issues our Society grapples with today. Visit his website at www.BernieSiegelMD.com

by Amy Quinton-UC Davis
A cat’s DNA alters how it responds to a life-saving medication used to treat hypertrophic cardiomyopathy, researchers report.

Dog Coronavirus Found In Humans and Why You Shouldn't Worry

by Sarah L Caddy, University of Cambridge
Scientists have found a new canine coronavirus in a handful of people hospitalised with pneumonia. This may sound alarming, but once we unpack it, you will see that there’s no reason to lose any…

What Actually Is Catnip and Is It Safe For My Cat?

by Lauren Finka, Nottingham Trent University
There are many valid theories to explain the global appeal of cats, including our obsession with watching videos of them online. In terms of cats’ pure entertainment value, however, our fascinations…

5 Things That Can Interfere with Clear Interspecies Communication

by Nancy Windheart
In my blog posts, free resources, and courses, I talk a lot about the things that we can do to support and develop our inborn, natural interspecies communication abilities. In this post, I want to…

5 Things That Can Interfere with Clear Interspecies Communication (Video)

by Nancy Windheart
In my blog posts, free resources, and courses, I talk a lot about the things that we can do to support and develop our inborn, natural interspecies communication abilities. In this post, I want to…

Are Pandemic Puppies A Canine Crisis Or A Happy Household?

by Beth Daly, University of Windsor
Yep. A dog shortage. Yet, they are everywhere. Parks are full of them. Shelters are empty. Adoption rates have risen 30 to 40 per cent and foster organizations cannot keep up with the demand.