How to Turn Your Yard Into an Ecological Oasis 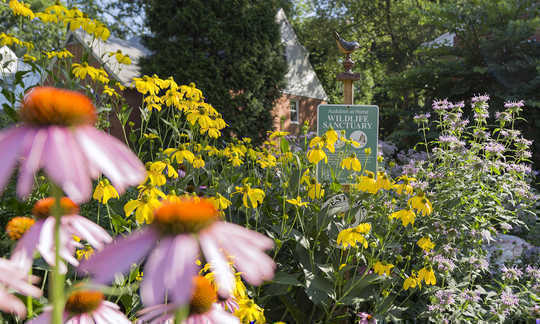 Toni Genberg’s 0.24-acre Virginia property is certified as Audubon at Home habitat, which means its native plants make it a beneficial location for birds, insects, butterflies, and animals.

For years, Toni Genberg assumed a healthy garden was a healthy habitat. That’s how she approached the landscaping around her home in northern Virginia. On trips to the local gardening center, she would privilege aesthetics, buying whatever looked pretty, “which was typically ornamental or invasive plants,” she says. Then, in 2014, Genberg attended a talk by Doug Tallamy, a professor of entomology at the University of Delaware. “I learned I was actually starving our wildlife,” she says.

The problem, Tallamy explained, is with the picky diets of plant-eating insects. Most of these bugs—roughly 90%—eat and reproduce on only certain native plant species, specifically those with whom they share an evolutionary history. Without these carefully tuned adaptations of specific plants, insect populations suffer. And because bugs themselves are a key food source for birds, rodents, amphibians, and other critters, that dependence on natives—and the consequences of not having them—works its way up the food chain. Over time, landscapes that consist mainly of invasive or nonnative plants could become dead zones. 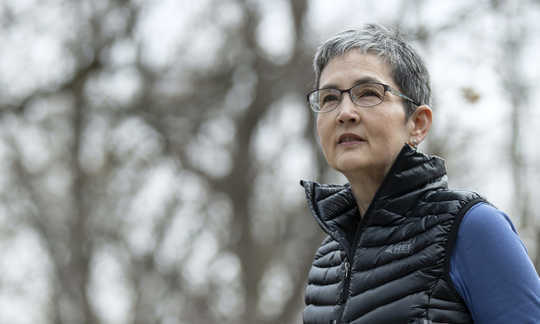 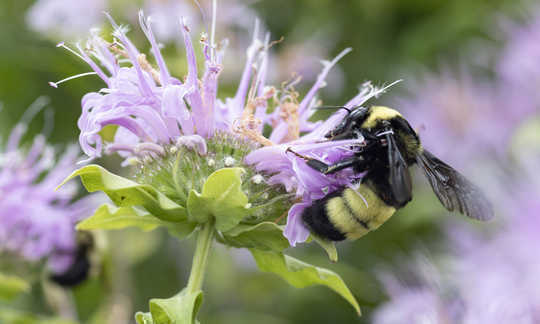 Croplands can be just as destructive, making up nearly 20% of all land in the United States. And that doesn’t even include the single largest irrigated crop in the country. Covering more than 40 million acres in the U.S., grass lawn consumes an area roughly the size of New England—land that, for the sake of habitat conservation, might as well be pavement.

Considering how little habitat and food these monocultures provide, and the incredible amount of resources they require, is there any wonder why the global insect populations are plummeting?

But there are solutions. One, at least in theory, is quite simple: Plant more native species. It’s a calling that has spoken to a growing number of park managers, home gardeners, and landscapers—many of whom trace a direct line of inspiration to Tallamy. His research has helped overturn decades of harmful horticultural practice, forcing us to rethink how we tend to both public and private spaces.

In lieu of monocrops, landscapes with a larger, more diverse biomass of native species help support pollinators, sequester carbon, capture runoff, and rebuild habitats. One recent study found habitats with two or three native tree species are on average 25% to 30% more productive than monocultures, meaning they contribute that much more food and energy to an ecosystem. Habitats with five native tree species were 50% more productive. Wildlife is drawn to lands teeming with native plants. 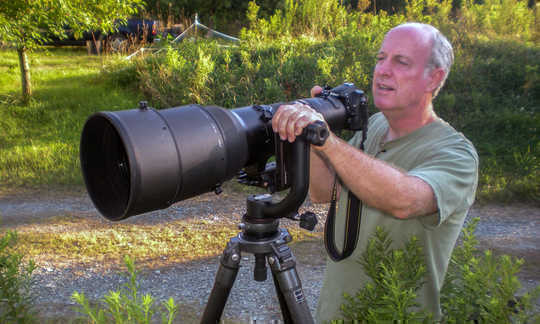 Doug Tallamy, a professor of entomology, works to promote the planting of native plants in place of turfgrass. Photo by Cindy Tallamy.

For individuals who’d like to live a more sustainable lifestyle, the simple message of planting more native species is both productive and rewarding—a refreshing contrast to consumerist exhortations that blame the collective problem of environmental collapse on individual shopping choices. Like anything else, real change has to happen at the macro level, especially when it comes to turfgrass—a crop with deep cultural, even evolutionary roots.

Sociobiologists refer to the preference humans have for vast swaths of low-cut grass as “Savanna Syndrome.” Open grasslands allowed our primitive ancestors to keep an eye out for predators. So even today, on a deep level, we feel safer when we can see to the horizon.

Lawn is the default landscape, but it doesn’t have to be.

Until the Industrial Age, the demands of agriculture kept lawns at bay. They were seen mostly as status symbols that said a person had enough money to brush off the territorial demands of farmland. The invention of the lawnmower democratized the lawn, and further embedded its pathological hold on our psyches.

But lawns require huge quantities of water and often chemical treatments to maintain them—not to mention the emissions produced by two-cycle lawnmowers. According to the Environmental Protection Agency, running a lawnmower for one hour emits as much air pollution as driving a typical car 100 miles. This resource allocation becomes more and more difficult to justify as climate change continues to dry up once-productive habitats. As a monocrop, lawns displace landscapes that could benefit people, plants, animals, and insects. It’s time for us to reconsider lawns on a grand scale, several researchers have concluded.

Considering how entrenched lawns are in the American imagination, to uproot them will require some give-and-take. Advocates say we need a culture shift as well as policies that support it.

“As climate change and droughts worsen, we might get to a point where there’s political support to outlaw lawns,” says Sarah B. Schindler, a professor of law at the University of Maine, who has written several papers about the legal authority of municipalities to ban lawns. “I do think we’re seeing a change in norms, and I think part of that is tied to rising awareness of climate catastrophe.” 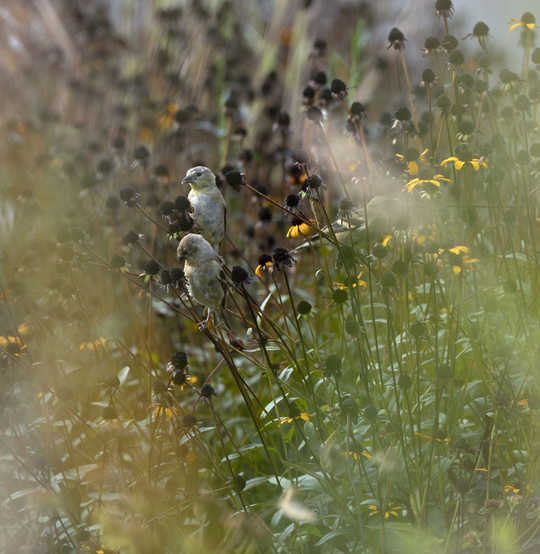 Many native species flock to Genberg’s property, including American goldfinches that dine on the seeds of orange coneflower (Rudbeckia fulgida). Photo by Toni Genberg.

Part of that work is simply raising awareness. Many people don’t think about the possibility of their yards as anything but turfgrass. As Tallamy puts it, lawn is the default landscape, but it doesn’t have to be. “People don’t realize there’s an alternative.”

Some communities are beginning to impose alternatives. In California, Colorado, and Arizona, where water shortages are a growing crisis, cities offer rebates for each square foot of lawn replaced with native or water-saving landscapes—a process known as “xeriscaping.” In wetter climes, Washington, D.C., and cities in Nebraska, Washington state, Iowa, and Minnesota have implemented rebate programs for the planting of rain gardens, which capture and infiltrate more runoff than grass. The city of Alexandria, Virginia, recently changed its municipal mowing to allow for the growth of meadows and glades in city parks.

Throughout the country, local groups are advocating for the planting of natives on roadsides, medians, campuses, and parks. Some, like Food Not Lawns, encourage homeowners and neighborhoods to replace lawns with edible plants to establish food sovereignty and food security within their communities. Others take a more clandestine approach by planting “guerrilla gardens” or tossing “seed bombs” into abandoned lots and properties where they don’t have the legal right to garden. 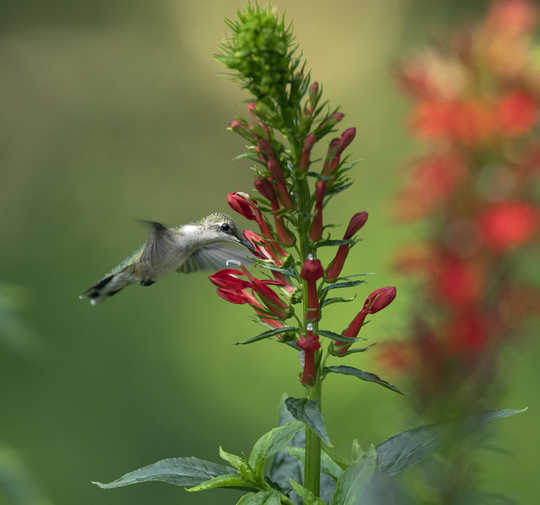 “One thing that we’ve learned with our research is that there is room for compromise,” Tallamy says. Native planting doesn’t have to be all or none to make a difference. He gave the example of chickadee reproduction: If you have at least 70% native plant biomass in a given habitat, you can have sustainable chickadee reproduction. “That gives you 30% to plant perennials and exotics and other ornamental plants.”

Tallamy’s research into the relationship between native plants and insects has inspired gardeners to do more than just turn their yards into native oases. Many are now creating resources to empower others to do the same.

The National Wildlife Federation created a native plant finder web tool, which allows users to plug in a ZIP code to find trees, shrubs, and plants native to their region. Following her horticultural revelation, Toni Genberg created ChooseNatives.org, a resource to help users find, purchase, and learn about native plants. Since switching to natives, Genberg herself has seen all sorts of wildlife return to a property that, before, was only a suburban simulacrum.

Matt Bright founded the nonprofit charity Earth Sangha with the goal of propagating and restoring local native plant communities in the D.C. area. “We’ve set records for total plants distributed from our wild plant nursery for four years running,” he says. “And overall, the trend has been towards more demand from all corners, whether that’s from park managers and ecologists, homeowners, or landscaping companies.”

But shifting away from lawns is complicated by the fact that municipalities have long adopted rules called “weed ordinances,” which require short ground cover for purely aesthetic reasons. This effectively mandates the planting and maintaining of lawns, as do many local zoning laws and HOA bylaws. And these rules aren’t always taken lightly. In Michigan a few years ago, a woman faced jail time for growing a vegetable garden in her front yard instead of lawn. 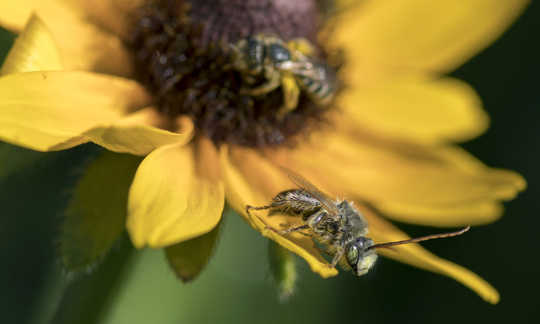 The elephant in the room, of course, is property rights. Limits and requirements can inspire backlash. As Genberg points out, “Americans don’t want to be told what to do, especially when it comes to their properties.”

That’s why Tallamy has focused on talking to the public instead of advancing top-down regulation. Laws, especially bans, need public support to pass. To even think about regulating lawns you first need to change the culture around them. As people like Toni Genberg and Matt Bright show, Tallamy’s message is resonating.

“What you do on your property affects everybody,” Tallamy says. Nonnative or ornamental plants may not look like pollutants, but from an ecological standpoint, they are. Tallamy’s research bears this out: A new paper from his team shows just how effective nonnative plants are at destroying local habitats. 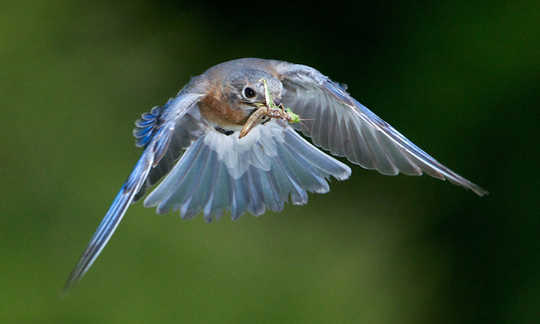 A bluebird taking off with its meal. Photo by Doug Tallamy.

But there’s a flip side, he says. If you take the invasive species out and put the native plants in, you’ve just created 96% more food.

And this isn’t some gardening trend reserved for America’s suburbs and conservation lands. In Manhattan, the most densely populated urban center in the country, officials converted an abandoned railway line into a public park called the High Line, with a policy of planting at least 50% native species.

“There are monarch butterflies there, there are all kinds of native bees, which really surprised me,” Tallamy says. “If you can do that in Manhattan, you can do it anywhere.”

Tyler Wells Lynch is a freelance writer whose work has appeared in Vice, Gizmodo, Wirecutter, USA Today, The Rumpus, and the Huffington Post. He lives in Maine.