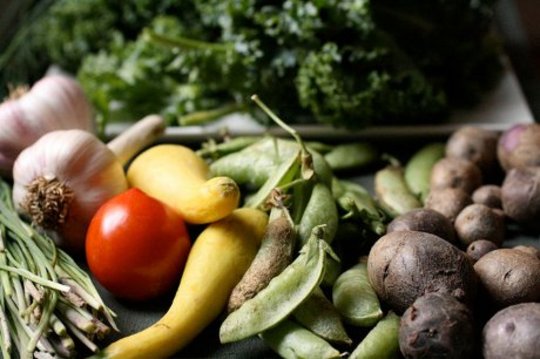 Eat organic, it's better for the planet. thebittenword.com/flickr, CC BY

The unintended consequences of our agricultural food system – polluted air and water, dead zones in coastal seas, soil erosion – have profound implications for human health and the environment. So more sustainable agricultural practices are needed as soon as possible.

Some farmers have turned to less chemically-intensive techniques to reduce the negative impact of agriculture, such as organic farming, which has been shown to outperform conventional farming by many standards of environmental sustainability. The question is whether we can meet these environmental standards and still meet the demand for food, which is predicted to rise substantially in the next 50 years.

In our new study, published in Proceedings of the Royal Society B, we found that organic farming systems, when done right, come close to matching the productivity of conventional systems.

Designing a single experiment that could possibly represent the huge variation in crops, weather and soil necessary to get a complete answer is impossible. Instead, we examined the many specific studies that have already been conducted and combined their results – a meta-analysis. We compiled studies from across the globe that compared organic and conventional yields over three decades, representing more than 1,000 comparisons of 52 crop species from 38 countries.

This isn’t the first time researchers have attempted to answer this question, but previous studies have had conflicting results. Combining studies carried out by different scientists for different reasons is a big challenge. Depending on what data is included and how it is handled, answers can vary substantially. Many previous studies found organic yields were 8-25% lower than conventional systems. Another study found that organic farming outperformed conventional in developing countries. In revisiting this question, we used the most extensive dataset to date and methods that try to account for the complexity of the data.

A Mirror To Nature

We found that although organic crop yields are about 19% lower than conventional yields, certain management practises appear to significantly reduce this gap. In fact, planting multiple different crops at the same time (polyculture) and planting a sequence of crops (crop rotation) on an organic farm cut the difference in yield in half. Interestingly, both these practices are based on techniques that mimic natural systems, and have been practised for thousands of years. Our study strongly suggests that we can develop highly productive organic farming methods if we mimic nature by creating ecologically diverse farms that draw strength from natural interactions between species.

Crop rotation and polycultures are known to improve soil health and reduce pest pressure. Because these practices add diversity to the landscape they also support biodiversity, so they may improve yields while also protecting the environment.

We also found that for some crops such as oats, tomatoes and apples there were no differences in yield between organic and industrial farming at all. The largest yield gaps were found in two cereal crops, wheat and barley. However, since the agricultural Green Revolution in the mid-20th century, improving the yields of cereals grown using conventional, industrial agriculture has received a huge amount of research and funding – far more than organic agriculture. Little wonder, then, that we see a large difference in yields.

For example, some seeds are specifically bred to work well in the nutrient-rich, pest-free conditions found in conventional farms due to the heavy use of fertilisers and pesticides, so they may underperform in organic farms. But if we invested in organic agricultural research and development we’d no doubt see a large increase in the yield too.

We also found evidence that the yield gap estimate we and others have calculated is likely an overestimate. We found evidence of bias in the studies we compiled, which favoured the reporting of higher conventional yields relative to organic. This can arise for several reasons: the studies can favour specific crops or practices so that the results are unrepresentative, or introduce bias during the selection of results to be published. It’s impossible to know the origins of the bias, but it’s necessary to acknowledge the effect it will have on yield estimates.

It’s important to remember that simply growing more food is not enough to address the twin crises of hunger and obesity. Current global food production already greatly exceeds what is needed to feed the world’s population, yet social, political, and economic factors prevent many people from living well-fed, healthy lives. A focus solely on increased yields will not solve the problem of world hunger.

To put the yield gap into context, the world’s food waste alone is 30-40% of food production per year. If food waste were cut by half, this would more than compensate for the difference in yield from converting to organic agriculture, as well as greatly reducing the environmental impact of agriculture.

Lauren C. Ponisio is a Doctoral candidate in Conservation Biology at University of California, Berkeley. As a conservation biologist, she focuses on understanding the mechanisms underlying the maintenance of biodiversity in natural and human dominated landscapes.She is particularly interested in how we can assemble communities through restoration.

Disclosure Statement: Lauren C. Ponisio does not work for, consult to, own shares in or receive funding from any company or organisation that would benefit from this article, and has no relevant affiliations.

Grow a Sustainable Diet: Planning and Growing to Feed Ourselves and the Earth
by Cindy Conner.

Grow a Sustainable Diet will help you develop a comprehensive, customized garden plan to produce the maximum number of calories and nutrients from any available space. Avoid arriving in August buried under a mountain of kale or zucchini (and not much else) by making thoughtful choices at the planning stage, focusing on dietary staples and key nutrients. Learn how to calculate: * Which food and cover crops are best for your specific requirements * How many seeds and plants of each variety you should sow * What and when to plant, harvest, and replant for maximum yield. Focusing on permaculture principles, bio-intensive gardening methods, getting food to the table with minimum fossil fuel input, and growing crops that sustain both you and your soil, this complete guide is a must-read for anyone working towards food self-sufficiency for themselves or their family.

How Urban Agriculture Can Improve Food Security In US Cities

Organic Agriculture Is Going Mainstream, But Not The Way You Think

Permaculture and the Myth of Scarcity

Farming The Suburbs and Why Can’t We Always Grow Food Wherever We Want?