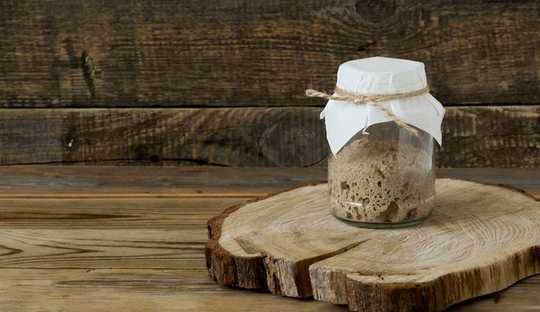 Are people reconnecting with the traditional household activities of their mothers and grandmothers under quarantine? The preparation of sourdough begins with a mix of flour, water and natural yeast. (Shutterstock)

My niece is sheltering at home during the COVID-19 pandemic. She’s making sourdough starter for the first time because she couldn’t find any dry yeast. It’s like having a newborn for the first three days — keep warm, stir three or four times a day, watch for bubbles, feed regularly after use. On cold winter nights, old-timers used to take their sourdough starter to bed with them.

Meanwhile flour is also scarce. A well-known flour company has run out of its usual bright yellow bags and has to use white ones instead. It seems everyone is baking these days.

Questions come to mind. Are people re-enacting the traditional household activities of their mothers and grandmothers? Does this signal a massive change in society?

We don’t really know. Søren Kierkegaard, the father of existentialism, once wrote that we live life forwards and understand it backwards. People may simply be stocking up on baking supplies while they’re in quarantine. It may or may not be largely limited to women who are baking.

Caring for one’s sourdough starter will not alleviate the fear of loss of control, but, as psychologists suggest, it offers the physical and emotional comfort of working with one’s hands. It makes me wonder if people are trying to remember what their home economics teachers taught them, or wishing they had taken home economics electives. 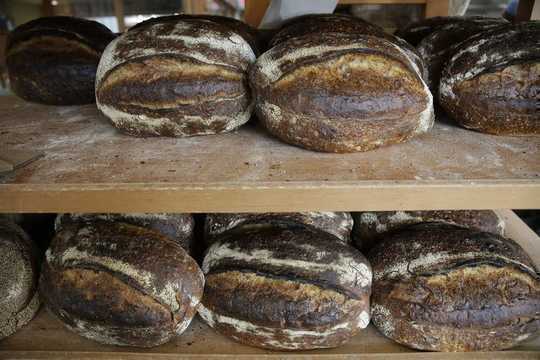 Freshly baked loaves of bread on a rack are seen at the Tartine Manufactory in San Francisco in August 2017. For some, baking has become a welcome respite from the stresses of the outside world. (AP Photo/Eric Risberg)

Many people assume that home economics only deals with teaching women how to cook and sew, as it did in the early years: the old stereotypes of women’s work, including cooking and sewing, are forever present. This definition was appropriate then, but isn’t now.

The unifying theme of home economics is ecology, where all living beings are parts of an integrated system and where a change in one part affects all other parts of the system. The truth of this theme has become painfully obvious in the COVID-19 pandemic.

When the International Federation for Home Economics turned 100 years old in 2008, it reaffirmed the mission of home economics to improve the quality of life and well-being for all people and families.

Home economics has always been more than passing on technical skills. It also includes communicating about everyday life and developing relationships. Critical thinking is important to ask which relationships matter, which people and what area of life will benefit from choices and how these choices affect the broader world. If people only learn skills, they have not learned how to be flexible in all circumstances, such as during shortages or extreme conditions.

Founder was a chemist

The home economics movement began in the 1800s for economic and societal reasons in England, northern Europe and North America.

Agriculture gave way to industry and commerce; countries needed strong, healthy workers for wars and factories. An opening came for women to further their educations under the guise of scientific housekeeping, later referred to as domestic science, and then home economics.

Ellen Swallow Richards, the founder of home economics in North America, wanted to use the word “ecology” in the name. As the first woman to obtain a chemistry degree at MIT, and an outstanding scientist, she finally agreed to home economics in 1908.

In Canada, Adelaide Hunter Hoodless founded home economics education beginning with the Women’s Institute in 1897 and later post-secondary institutions such as the Macdonald Institute in Guelph, Ont.

Hoodless had taken up health as a worthy cause when her young son died from drinking tainted milk. She vowed that no other mother would have to go through such despair.

Up to the 1960s, home economics as a profession spread across the world and provided exceptional job opportunities for women in government, education, business, commerce and universities. Its basis was practical hands-on learning with a focus on women’s education.

My experience in home economics mirrors many young women of the 1960s. When I was 12, I joined 4-H, a rural youth organization that promoted “learn to do by doing” through practical projects and by offering leadership possibilities.

For me it was a window to the world. The district home economist in charge of the program was respected, independent and drove a government car. She was my first professional female role model, and she encouraged me to go into a bachelor of science program in household economics.

The second wave of feminism opened up many new areas of study to women and men. Home economics was no longer only for women, and consumerism and the market economy took over to a large extent.

The discipline of home economics has persisted in its focus on everyday life and the well-being of individuals and families. Over the years much discussion has swirled around the relevance of the name home economics. It sometimes goes incognito as human ecology, family and consumer sciences, family studies, home sciences, home arts, and career and technical studies.

‘I’m so happy about those buns’

Mother’s Day, the second Sunday in May, has become the time for North Americans to commemorate motherhood. The day dates back to about 100 years ago, around the same time that home economics was becoming recognized as a body of study. Many women, including myself, avoid Mother’s Day because it’s become so commercialized.

However, I cannot discount the connections between baking and mothering. My own mother used to visit my young family in the early 1980s and bake bread, including air buns. Once, when the buns were almost ready, my then-five-year-old son started dancing at the bottom of the stairs. She asked him, “Why are you dancing?” He said, “I’m so happy about those buns.”

Time passes, circumstances change and my memory of my mother baking is still very strong. Pandemic baking may also give indelible and sustaining outcomes to those who went through it. (And for the record, the bread my niece made with her first ever sourdough starter was pretty good!)

The links between home skills, home economics and love (not necessarily Mother’s Day) acknowledge all people’s desires for connection, activity and being part of a system. Home economics is not dead. It’s needed more than ever. Look for it.

There Are Thousands Of Excess Deaths From Popular Heartburn Drugs

What Smart Bees Can Teach Humans About Collective Intelligence

Mental Health: Why We're All Sick Under Neoliberalism