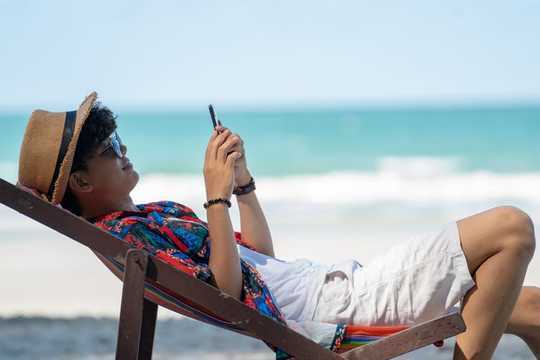 That two-week beach vacation you’ve been dreaming of could have long-term effects on your health. PVStudio/ Shutterstock

As a society, we aren’t getting as much exercise as we should. In fact, current activity guidelines state that adults should get at least 150 minutes of moderately intense activity – or 75 minutes of vigorous activity – every week. But research has found that one in four adults aren’t active enough.

It’s easy to see why. Many of us drive to work instead of walking – and for those of us who work desk jobs, many are often so focused on what we’re doing we rarely get up from our desks except to visit the bathroom or get a drink. In short, though we might be busy, we aren’t moving very much. But after dealing with the stress of work week after week, it’s easy to daydream about unwinding on a warm beach, doing nothing but lounge around for a fortnight. But this might not be what our bodies need. In fact, it might actually be more harmful than we realise.

Our research looked at what effect even short periods of physical inactivity had on our bodies. We found that even just two weeks of low activity actually increased participants’ risk of later developing serious health conditions such as cardiovascular disease.

We know that physical activity is good for us. This is irrefutable, and we’ve known this for a long time. As far back as the 1950s, the link between day-to-day physical activity and health was first identified in the London transport workers study.

The study found that bus drivers were more likely to experience a heart attack compared to their bus conductor counterparts. The main difference between these two groups was that conductors spent their working day on their feet collecting fares from commuters, while bus drivers spent their days sitting down.

Since then, some have branded physical activity a “miracle cure” for cardiovascular risk. Yet, as a society, we are more sedentary than ever, and cardiovascular-related deaths remain the leading cause of death worldwide.

While we know that having a physically active lifestyle will improve our health, surely we aren’t doing any additional harm, even if we choose not to be physically active? We decided to examine exactly what the harmful effects of being physically inactive are.

For our study, we recruited young (aged 18-50 years), healthy weight (BMI less than 30), physically active individuals (meaning that they take more than 10,000 steps per day on average). After carrying out assessments to measure blood vessel health, body composition and blood sugar control, we asked them to become inactive for two weeks.

To achieve this, participants were provided with a step counter and asked not to exceed 1,500 steps per day, which equates to approximately two laps of a full sized football pitch. After two weeks, we reassessed their blood vessel health, body composition and blood sugar control to examine what effects two weeks of inactivity had on them. We then asked them to resume their usual routine and behaviours. Two weeks after resuming their normal daily lifestyles, we checked participants’ health markers to see if they’d returned to where they were when they’d started the trial.

Our group of participants successfully reduced their step count by an average of around 10,000 steps per day and, in doing so, increased their waking sedentary time by an average of 103 minutes per day. Artery function decreased following this two-week period of relative inactivity, but returned to their normal levels after two weeks following their usual lifestyles. 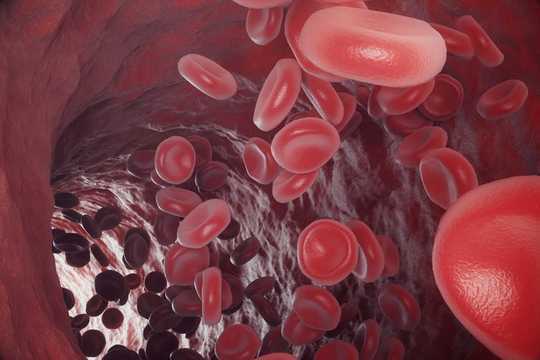 We were interested in seeing how activity levels influenced blood vessel health, since this is where most cardiovascular disease starts. Most of us don’t realise that our blood vessels are a complex system. They’re lined with muscle and constantly adapt to our needs by dilating (opening) and constricting (closing) to distribute blood where it’s most needed. For example, during exercise vessels feeding organs such as the stomach will constrict, as it is inactive at this time, and so blood is redistributed to our working muscles to fuel movement. One of the earliest detectable signs of cardiovascular risk is a reduced function of this dilatory capacity.

To measure this, we used an imaging technique called flow-mediated dilation or FMD. FMD measures how well the arteries dilate and constrict, and it has been found to predict our future cardiovascular risk.

We found that after as little as two weeks of inactivity there was a reduction in artery function. This indicates the start of cardiovascular disease development as a result of being inactive. We also observed an increase in traditional risk factors, such as body fat, waist circumference, fitness and diabetes markers, including liver fat, and insulin sensitivity.

Something we also observed – which we initially weren’t researching – was that resuming normal activity levels following two weeks of being physically inactive was below baseline. That is to say, our participants did not return back to normal within two weeks of completing the intervention.

These results show us that we need to make changes to public health messages and emphasise the harmful effect of even short-term physical inactivity. Small alterations to daily living can have a significant impact on health – positively, or negatively. People should be encouraged to increase their physical activity levels, in any way possible. Simply increasing daily physical activity can have measurable benefits. This could include having a ten-minute walk during your lunch hour, standing from your desk on an hourly basis to break up sitting time or parking your car at the back of the supermarket car park to get more steps in.

The impact of spending a large proportion of the day being inactive has received a lot of research in recent years. In fact, it has become a hot point of discussion among exercise scientists. As technology advances and our lives become increasingly geared towards convenience, it’s important this kind of research continues.

The health consequences of sedentary behaviour are severe and numerous. Moving more in everyday life could be key in improving your overall health.

by Charles James Steward, Coventry University
The term “exercise is medicine” is rightfully well publicised. It’s one of the best ways to stay healthy, yet medicine doesn’t work if you aren’t prepared to take it.

30 Minutes' Exercise Won't Counteract Sitting All Day... What Can?

by Sebastien Chastin and Keith Diaz
It’s recommended we do at least 30 minutes of exercise a day – or 150 minutes a week – to stay healthy. But 30 minutes accounts for just 2% of the day. And many of us spend most of the rest of the…

by Matthew Haines, University of Huddersfield
High-intensity interval training (HIIT) workouts have become popular in recent years for a number of reasons. They don’t require as much time as a regular workout (some can take as little as 10…

Going Back To The Gym: How To Avoid Injuries

by Matthew Wright, Mark Richardson and Paul Chesterton, Teesside University
Injuries happen when training load exceeds tissue tolerance – so basically, when you do more than your body is capable of. Fatigue, muscle-tendon strength, joint range of motion, and previous injury…

by Laura Khoudari
Figuring out how to initiate (or return) to exercise in a way that feels emotionally and physically safe after experiencing illness, accidents, or acts of violence can be challenging, triggering, and…

by Jamie Hartmann-Boyce, University of Oxford
A new US study shows that people who are less physically active are more likely to be hospitalised and die with COVID-19. According to these new calculations, being inactive...