Why Anxious Teenage Girls At Higher Risk Of Eating-Disorder Symptoms

Anorexia nervosa is an eating disorder with one of the highest mortality rates of all psychiatric disorders. It is estimated that as many as 4% of women in the west will have the condition at some point in their life.

The illness, which usually starts in adolescence, is difficult to treat. Only around half of those treated recover, so preventing it is really important. However, to effectively prevent a disorder, you need to be able to identify the early signs.

Restrictive eating, restricting the number of calories or quantity of food consumed, is not only a core feature of anorexia but it is also an early symptom that precedes anorexia onset. In our latest study we wanted to understand whether anxiety disorders predicted restrictive eating.

We were interested in a particularly severe form of restrictive eating, which was fasting for an entire day for weight control (losing weight or avoiding weight gain). We assessed whether having an anxiety disorder predicted how likely people were to fast in the future, two years after the anxiety assessment. 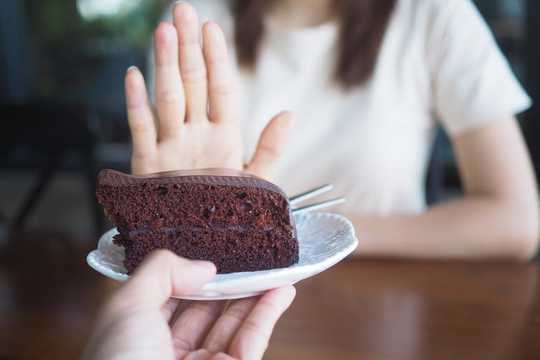 Our research included 2,406 girls from the Avon Longitudinal Study of Parents and Children, a project studying the health and wellbeing of babies born in the early 1990s in Bristol. The participants’ anxiety disorders and fasting behaviour were measured three times between the ages of 13 and 18. Using this data, we were able to investigate the links between anxiety disorders and fasting across adolescence.

Outcomes of our study suggest who might be most at risk of an eating disorder, so it could be useful in highlighting people who might benefit from eating-disorder prevention efforts.

Clarifying whether the association we observed is causal is important. Should this be the case, it may be that targeting anxiety disorder symptoms is an effective way of reducing the chance of an eating disorder developing.

An alternative explanation for the patterns we see in our data is that anxiety disorders and restrictive eating are caused by the same things. This would also lead to the two occurring together in people.

Recent findings from a large scale study of the genetics of anorexia nervosa supported there being common genetic risk factors for anorexia and anxiety disorders. We consider this possibility in our ongoing work, which is focused on better understanding exactly how anxiety disorder and eating-disorder symptoms are associated.

Our study only included girls, so our conclusions may not apply to teenage boys. Future research should consider the presence of associations between anxiety disorder and disordered eating symptoms in boys and men. This will promote a fuller understanding of relationships between psychiatric symptoms and disorders across different groups in the population.

by David Topping, et al
Six out of ten Australians don’t eat enough fibre, and even more don’t get the right combination of fibres.

by Nicola Guess
Whether restricting carbohydrate intake is an effective way to manage type 2 diabetes is a topic of some controversy in nutrition – largely because trial results have so far been pretty inconclusive.

by Claus T. Christophersen
It’s that time of year again, with Christmas parties, end-of-year get-togethers and holiday catch-ups on the horizon for many of us — all COVID-safe, of course. All that party food and takeaway,…

Why Food Variety Is Important For Your Health

by Rochelle Embling et al
It’s well known that a healthy diet can help reduce disease risks that are related to overweight or obesity – such as some cancers, cardiovascular disease and diabetes.

5 Ways To Increase Needed Protein Intake As We Age

by Katherine Appleton and Emmy van den Heuvel
Protein is an essential part of a healthy diet. It helps us build and maintain strong muscles and bones, helps us better recover from illness and injury, and reduces likelihood of falls and fractures.

by Rena Greenberg
Each day that you choose to eat healthfully and simply— selecting whole, unprocessed foods from the earth and bal­ancing your foods—know that you are building a new foun­dation for yourself. At…