Confused About Your Cancer Risk From Eating Meat? Here's What The Figures Mean 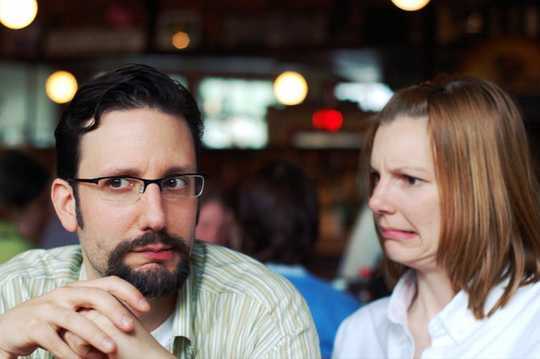 Methods of communicating relative risk to the public are often confusing. Brian Talbot/Flickr, CC BY

In a recent report on processed meat and risk of bowel cancer, the International Agency for Research on Cancer (IARC) stated:

Each 50 gram portion (under 2 oz.) of processed meat eaten daily increases the risk of colorectal cancer by 18%.

This method of communicating risk led to confusion and some hostile reactions. Scientists can explain risks of cancer and other diseases in several ways; some are easier to understand than others.

The IARC statement is based on a summary of many epidemiological studies assessing the relationship between meat consumption and bowel cancer, including a study by one of us.

Epidemiology is the science of studying the distribution and determinants of disease in populations. At its heart lie comparisons of the frequency of disease for people exposed or not exposed to a particular substance, environmental condition or lifestyle.

In this case, IARC was comparing the risk of bowel cancer for people who eat 50 grams of processed meat per day with the risk for those who don’t eat processed meat at all.

The 18% increase means the risk of developing bowel cancer is 1.18 times higher for those who eat 50 grams of processed meat per day compared to those who eat none. The figure 1.18 is known as “relative risk”.

Put this way, the increase is quite small. By contrast, men who smoke cigarettes have about 20 times the risk of developing lung cancer as men who do not smoke. Expressed as a percentage, the increase in risk due to smoking is 1,900%.

A potential problem with presenting relative risk in the format IARC uses is that many people will incorrectly conclude that if they ate processed meat, they had an 18% (almost one in five) chance of getting bowel cancer. Thus, they were misled.

Presenting relative risks to the public in any format is not very informative. A better way to communicate the effect of specific risk factors is to present what is known as the “absolute risk”.

Australians fortunate enough to live to the age of 85 have an 8.2% chance of being diagnosed with bowel cancer over their lifetime; this is the “lifetime risk”.

Although our estimate that one-quarter of the population eat 50 grams of processed meat daily is not likely to be correct, changing this proportion does not have much effect on the two absolute risks.

Of course, this naive calculation assumes everything else is equal; that people who eat processed meat differ in no other ways that affect risk of bowel cancer from those who do not.

But we know many factors contribute to risk of bowel cancer – being overweight, alcohol consumption, being physically inactive and family history, to name a few. With so many variables driving risk, it is clear no two people are likely to have exactly the same risk profile.

Cancer Research United Kingdom presented the risks in this way.

Out of every 1,000 people in the UK, about 61 will develop bowel cancer at some point in their lives. Those who eat the lowest amount of processed meat are likely to have a lower lifetime risk than the rest of the population (about 56 cases per 1,000 low meat-eaters).

If you only expect to live to 65, your chance of getting bowel cancer is 2.9% if you don’t eat processed meat and 3.4% if you eat 50 grams each day. Of course, if you indulge more, the risk increases, but to similar proportions for each additional 50 grams per day.

Absolute risks allow people to personalise the effects and to better compare them. Yes, calculating absolute risk requires a strong assumption that there are no other differences between people who are exposed and not exposed. But we still believe that being able to compare absolute risks is more informative and less likely to mislead than relative risks.

Another useful way of communicating the burden of cancer due to a risk factor is to calculate what is known as the population attributable fraction – that is, the fraction of cancer that is due to the risk factor.

Researchers recently estimated that 18% of bowel cancers in Australia could be attributed to consumption of red and processed meat (they did not have data to allow them to separate the effects of processed and red meat). This equated to about 2,600 cases in 2010.

The increase in risk due to red and processed meat is small, but together they account for many cases because Australians eat a lot of meat.

A lot of public money, via taxes or donated funds to cancer organisations, is invested in research. There is a moral imperative to report the findings of such research, but rarely is one study definitive.

So major reviews by IARC are vital to bring together the best assessment of the evidence about what does and does not contribute to cancer risk. And people want to know.

The best cancer is the one you never get. Given we know the cause of about one-third of cancers in Australia (smoking, alcohol, lack of exercise and nutrition factors), it is not unreasonable to give the best available information to people about what we know.

But clearly we have a way to go in better communicating what these risks really mean and how people can use this information in their daily choices.

Luckily, decades of solid evidence underpins some pretty simple advice to stack the cancer odds in your favour. For most people: