How To Make Better Espresso 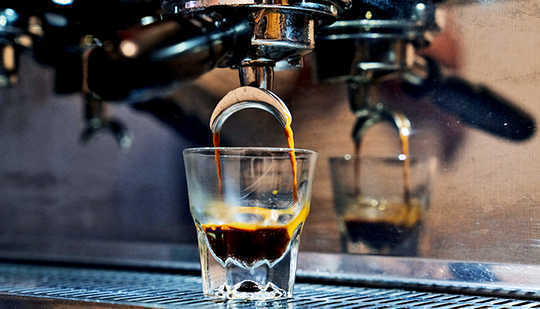 "The point of this paper was to give people a map for making an espresso beverage that they like and then be able to make it 100 times in a row."(Credit: Dustin Whitaker/U. Oregon)

A new approach can help you make the perfect shot of espresso, researchers report.

The key to the approach? Use less coffee at a coarser grind than traditional wisdom has suggested, says Christopher Hendon, a computational chemist in the the chemistry and biochemistry department at the University of Oregon. The formula also makes espresso faster and with less water than usual.

“We want to extract more from the coffee to save money, and be sustainable, but we also want it to taste delicious, not burnt or bitter,” he says. “Our method allows us to accomplish that.”

The method, the research team concludes, could deliver an economic savings of $1.1 billion a year for US coffee shops by allowing them to trim 13 cents from each of the 124 million espresso-based drinks they produce each day. The new approach also would raise the extraction yield of each bag of coffee beans above the current 18% to 22%.

Chemists, mathematicians, and coffee professionals from five countries collaborated on the project. They analyzed grind size, water pressure, flow rate, amount of coffee, and extraction kinetics to seek an optimum extraction yield, or the percentage of coffee that gets into a drink.

Their work drew on electrochemistry, likening how caffeine and other molecules dissolve out of coffee grounds to how lithium ions move through the electrodes of a battery. Borrowing modeling methodologies from battery work led to a rigorous coffee extraction model capable of making powerful and testable predictions.

“…the most reproducible thing you can do is use less coffee.”

“The real impact of this paper is that the most reproducible thing you can do is use less coffee,” Hendon says. “If you use 15 grams [about half an ounce] instead of 20 grams [0.7 ounces] of coffee and grind your beans coarser, you end up with a shot that runs really fast but tastes great. Instead of taking 25 seconds, it could run in 7 to 14 seconds. But you end up extracting more positive flavors from the beans, so the strength of the cup is not dramatically reduced. Bitter, off-tasting flavors never have a chance to make their way into the cup.”

Finding the right coarse grind that allows water to flow through correctly will need individual experimentation to make the team’s formula work. Coarser doesn’t mean simply changing a grinder setting from fine to course, Hendon says. The coarse grind researchers chose as effective in the study produced variably sized particles but still fit into what is considered a fine grind. Bur grinders, he adds, provide the best means for fine-tuning a workable fine grind.

“A good espresso beverage can be made in a multitude of ways,” he says. “The point of this paper was to give people a map for making an espresso beverage that they like and then be able to make it 100 times in a row.”

Christopher Hendon is a computational chemist in the the chemistry and biochemistry department at the University of Oregon.

The new research appears in Matter.

Barista Technology and Acaia Corp. donated equipment for the project. The researchers performed computations collaboratively via the Extreme Science and Engineering Discovery Environment, a virtual system of shared computing resources, data, and expertise that the National Science Foundation supports.