Ticks Aren’t The Only Critters To Spread Lyme Disease 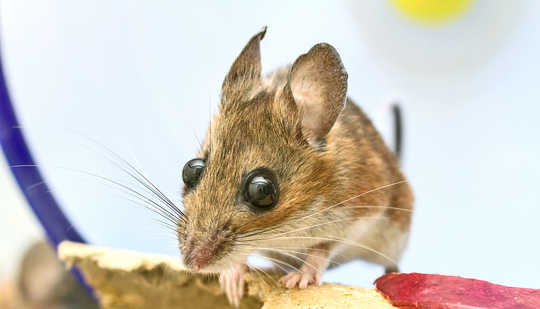 Researchers have sequenced the genome of an animal that carries the bacteria that cause Lyme disease. It’s not a tick, but the white-footed mouse.

Scientists say the move is a significant step toward finding new ways to prevent the disease’s transmission and provides a launching pad for fresh approaches to stopping it from infecting people.

It took researchers four years to decode the genetic makeup of the white-footed mouse Peromyscus leucopus, which harbors the Lyme disease-causing bacteria. Unlike mice that scurry into human homes, these rodents inhabit forests, shrubbery, and wetlands. People become infected when a tick bites them after feeding on a white-footed mouse carrying the bacteria.

“If you want to understand a species, knowing its genetic blueprint is invaluable.”

“Many efforts to combat Lyme disease have focused on trying to control those ticks, but they have been difficult to put in practice,” says Alan Barbour a professor of medicine and microbiology & molecular genetics at the University of California, Irvine School of Medicine. “So we decided that instead we should look at the animal carrying it.”

As a next step in examining the white-footed mouse’s role in Lyme disease’s spread, Anthony Long, professor of ecology & evolutionary biology, worked with Barbour and other researchers to determine the DNA letter sequence that makes up the animal’s genome.

With 2.45 billion of those letters, representing nucleotides that form DNA’s basic structural unit, its genome is similar in size to that of humans.

“Understanding what shields them from getting sick could guide us in protecting humans from it.”

“If you want to understand a species, knowing its genetic blueprint is invaluable,” Long says. “It provides a road map that makes new research approaches much faster and more efficient.”

While these rodents are called mice, they are more closely related to hamsters than to the house mouse and the researchers’ new data emphasized this fact.

With the genome in hand, the scientists now want to pursue several potential avenues for preventing Lyme disease transmission. Among them: develop an environmentally-safe, humane vaccination method for white-footed mice in the wild, a process already used to prevent rabies transmission in other kinds of animals.

Why don’t the mice get sick?

They also would like to find out why the rodents don’t develop Lyme disease even though they carry the bacteria.

“Understanding what shields them from getting sick could guide us in protecting humans from it,” Barbour says. He notes that besides harboring Lyme disease, the rodents carry other emerging infections, including a form of viral encephalitis and illnesses similar to malaria and Rocky Mountain spotted fever.

The white-footed mouse genome is now available for free download to all who are interested in Lyme or in the additional disease-causing microorganisms that can be transferred from the rodent carrier to humans. The scientists say they hope the information will help others in the quest to fight this transmission.

As they move forward with their investigations, the researchers say it remains important for the public to continue safeguarding against Lyme disease by preventing tick bites. Information on how to protect people, pets, and yards from the insects is available on the Centers for Disease Control and Prevention website.

The reported number of confirmed and probable Lyme disease cases in the United States rose more than 17 percent between 2016 and 2017, increasing from 36,429 to 42,743, according to the CDC. Noting that those figures likely represent only a fraction of the actual amount, it also says reported cases have tripled since the late 1990s.

Several factors contribute to Lyme’s rise, the CDC says, including the growth of forests in what were once agricultural fields, the development of suburbs in those areas, and changes in ecological patterns due to climate change.

Additional are coauthors from UC Irvine, UC Santa Cruz, and the University of Utah. The National Institute of Allergy and Infectious Diseases supported the work, which appears in Science Advances.

Answers To Those Puzzling Questions Of The Coronavirus