Life Is Not A Sprint, But A Journey To Be Fully Enjoyed 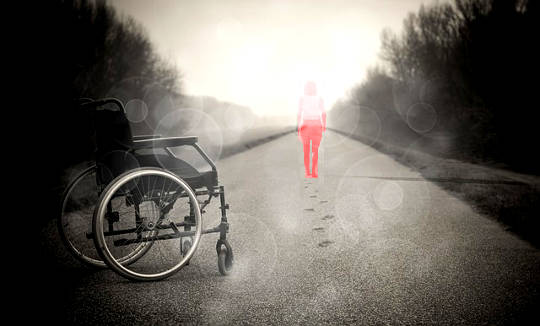 Before I had my stroke, the only kind of books I read were textbooks. Now, I read all kinds ofbooks: mysteries, biographies, histories, fiction, and self-improvement. I realize the stroke has had a direct impact on my communication (speech, writing, and overall comprehension), but it came back. . . not all of it, but I am a far cry from where I was in those first years after the stroke.

I remember one time, not too long after my stroke, I was sitting on my bed with Kelly. I was reading about neurobic exercises from the book Keep Your Brain Alive by Lawrence Katz. It had so many pages that I couldn’t understand. I didn’t know the words. I didn’t know what they meant. I know now, but that moment still lives with me. I’m not a dictionary geek, but I’m always checking words and idioms, even today—always rebuilding and expanding my vocabulary and improving my fluency.

Four or five months later, I tried to read that book a second time. I could understand 40 to 50 percent, but I had to go very slowly. I went back to it after two years, and I understood a lot more.

The Most Important Strategy: Stay Positive

When I put the first strategy report together for  The Rehabilitation Institute of Chicago (RIC), I had to do some presentations with a small group of people. They waited until the end and then asked questions. The first question was, “Of all the rehab activities you did, Ted, including speech therapists, physical trainers, doctors, neurologists, alternative medicines, psychologists, acupuncturists, and so on, which one was the most beneficial for you to come back into society?”

I couldn’t answer. There was no one thing, no single, primary focus. I told them, “It’s like osmosis—it just happens, gradually. You can feel it. You’ll know when your abilities come back. I discovered abilities I didn’t know I had before my stroke. I’ve done so many things. People at various times have told me to just do this or focus on that. But I had to know the rationale before I would focus on or do a particular task. When that explanation wasn’t provided, I chose a different way. I always had, and still have, strategies and options in place. I had so many things I could do, and I did as many of them as I could. There was always a purpose and a desired result for each. I always kept plugging on. So, maybe the most beneficial things were persistence and resilience.”

And not to forget, I had an amazing family and support system behind me. Kelly was always there, supporting me. My family and friends called me and checked in to see how my progress was coming along. They never gave up on my recovery, nor did they ever treat me as if I were lost, and because of that, I never felt lost.

I can’t tell you the most important component, but none of it would have worked without positive attitude. You must stay positive.

Determination. Motivation. Tenacity. Perseverance. Persistence. Being Relentless. Don’t get yourself down if things don’t go your way. Keep trying to retool your approach;  you’ll find a way to solve a problem and get yourself past any frustrations and rejections you had. Realize that these are providing valuable opportunities to learn for the next time.

Before the stroke, Ted was all business. Very serious. Since he’s recovered, he’s got such a sense of humor. He’s come almost 180 degrees now. He’s so much funnier, and all his humor—his dry sense of humor—has come out. It never came out before the stroke. He’s a different person now. I don’t know that it’s so much for the better, but it seems like a big burden was lifted off his back. He’s become a real person now. He’s not a robot who was doomed to work relentlessly every day. He’s just funny. He’s funny to be with. And we’re just as close as we were before the stroke—probably closer.

I’m not embarrassed to say this: The majority of younger brothers would look up to their older brother, right? Ted would always look up to me. But now, despite being eleven years older than him, I look up to him. He just has this power. When we go out, he makes all the decisions, and I don’t have any problems with that. I’ll meet him in Las Vegas at eleven on a Friday night, which is really two a.m. my time, and he’ll say, “Come on, let’s go out to dinner.” I’m so tired from traveling all day, but I think nothing of going out to dinner with him because he asked me to meet him.

I’d do anything in the world for him. I really would. I’m the oldest of five boys and a girl, and our relationships are good between everybody. But, between me and Teddy, it’s just something. . . special.

He didn’t pay me to say that, either.

The Beginning Of A New Chapter Of My Life

In July 2012, two and a half years after I moved to California, I did a short PowerPoint presentation at Chapman University in Orange, California. I put together a succinct summation of what happened to me in Chicago, big pauses for me to think, and how I had amplified my own rehab so that I always felt comfortable and in charge of my recovery.  It was a big moment for me, but it’s not the end of my story. It’s only the beginning of a new chapter of my life.

I’ve wondered sometimes, throughout the few years after my stroke, what would have happened if I hadn’t had a stroke. Would I still work in the financial industry? I really enjoyed it, but I spent countless hours driving my career, at the cost of having real fun and deeper relationships with my family, my friends, my wife. I could have continued to hone my financial and people skills, attained my objective of being a CFO for one of the premier hedge funds in the world, managed a group of people, contributed to the largest global institutions, and worked with world-renowned financial experts.

But now, I help people who need more support. I feel such gratification in giving back to society. It gives me pleasure to know that I can motivate people and give them hope, even when they’ve experienced a life-changing health crisis.

I’m always learning and educating myself on the medical aspects of strokes and aphasia. I enjoy seeing my family and friends more than I ever did before. I try different things that I would never have had the chance to do. I learned to play and enjoy golf, joined book clubs, immersed myself in the world of art, made some great friends, and I am still meeting new faces.

I am more aware of things around me. I know myself and my identity better than before. During my recovery, I focused on hearing what others had to say, especially when my speaking was dormant. I’ve become an excellent listener, especially at times when I experience anxiety and stress, when my speech is not so fluent.

Creating A New, Better Blueprint For Your Life

Yes—I’m having fun more than before my stroke. And that is doing a world of good for me. I’ve created a new, better blueprint for my life. I am blessed to have the chance to have a fresh start.

My story is still being written, in a sense. I’m speaking in more places to spread the word about my experiences, the power of determination, and the possibility to change the patterns in our lives. I have a totally different perspective on life, a completely different way of going through my days, weeks, months, and years. I’m engaged in living, instead of in work.

Life is not a sprint, but a journey that is meant to be fully enjoyed. The trick to getting through the hardest times in life is to remember that there are many roadblocks along the way, but often, when you conquer those obstacles, there is greater happiness awaiting you on the other side.

Relentless: How a Massive Stroke Changed My Life for the Better
by Ted W. Baxter

In 2005, Ted W. Baxter was at the top of his game. He was a successful, globe-trotting businessman with a resume that would impress the best of the best. In peak physical condition, Ted worked out nearly every day of the week. And then, on April 21, 2005, all that came to an end. He had a massive ischemic stroke. Doctors feared he wouldn't make it, or if he did make it, he would be in a vegetative state in a hospital bed for the rest of his life. But miraculously, that's not what happened . . . Relentless is a wonderful resource for stroke survivors, caregivers, and their loved ones, but it is also an inspiring and motivating read for anyone who is facing struggles in their own life. (Also available as a Kindle edition and an Audiobook.)

After spending 22 years in the financial industry, Ted Baxter is retired as a global CFO with a large hedge investment firm based in Chicago. Prior to that, Ted was a managing director for a global investment bank and he was a Price Waterhouse partner and a consultant concentrated on banks and securities, risk management, financial products, and strategic planning. Internationally, he spent 8 years working and living in Tokyo and Hong Kong. Ted now volunteers at 2 hospitals in Orange County, leading groups in a stroke-related communication recovery program, and is a member of the Board of Directors at the American Heart and Stroke Association.