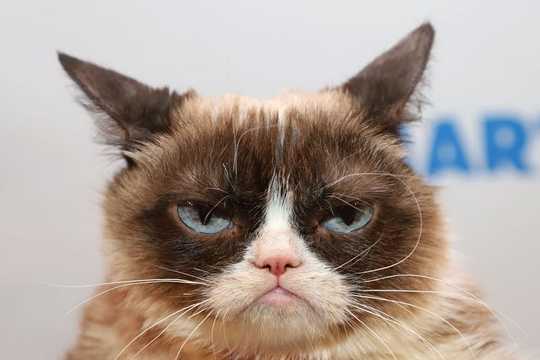 They say that eyes are windows to the soul. Indeed, research suggests this might also be true for our four-legged friends. Since the days of our most celebrated natural historian, Charles Darwin, humans have been interested in how animals communicate via their facial expressions, and how different species might express themselves in similar ways.

However, it wasn’t until relatively recently that scientists began to study animal faces systematically, to understand what this might tell us about their specific feelings or intentions. Most of this research has focused on trying to understand how their faces look when in pain, using “grimace scales”.

Grimace scales include a series of images that show how facial expressions change when animals experience no, moderate and severe pain. While mice were the original “guinea pigs” for these studies, similar scales have now been developed for a range of domesticated animals including horses,rabbits, ferrets, piglets, sheep, rats and also cats.

Interestingly, for many of these species, their faces seem to change in a similar manner when in pain. For example, their eyes become squinted, tension appears in their nose, mouth and cheeks, and their ears may look a bit flattened or drawn back.

While these findings help us understand the inner world of animals, we are still a long way off from possessing the so-called King Solomon’s ring – the power to speak to animals.

One of the limitations to our understanding of animals’ expressions is that we have tended to extrapolate from what we already know about human faces, even though animals often have quite different facial musculature and use this in different ways to us. 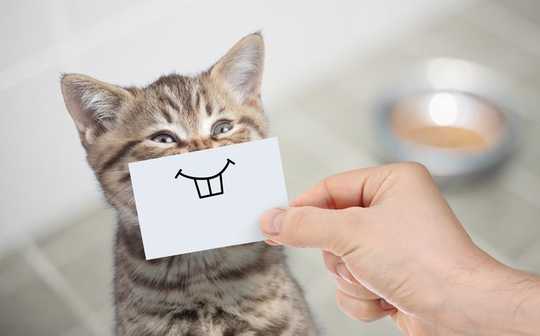 We often try to understand animals through what we know about humans. Andrey_Kuzmin/Shutterstock

There is also a potential issue when trying to identify the same expressions in species with very different looking faces; for example, a flat, round-faced Persian cat looks very different to a large-eared, long-nosed Siamese.

Some animals, especially cats, may also hold their cards close to their chests. Cat’s closest ancestors are solitary, territorial and potentially prey for larger mammals, so they are unlikely to want to advertise when they are in pain or generally feeling a bit off. Indeed, pain in cats is notoriously difficult to assess. Many cats might just become a little quiet, go off and hide, or even seemingly carry on as normal. Their expressions are therefore subtle and can be difficult for humans to identify.

Trying to assess pain by studying slight differences in facial expressions can quite literally be a pain-staking operation – it’s not always easy to do in real time and requires training. For these reasons, there has been growing interest in the use of machine learning to automate the process of analysing facial expressions in both humans and other animals.

What’s generally been missing is less human-based, and more species-specific, biologically relevant systems for animals. This was the motivation for the recent development of an approach focusing on cats which lays the foundation for future objective, automatic detection of facial expressions. Applying a technique usually reserved for measuring bones, we annotated almost a thousand pictures of cats’ faces based on the relative position of their underlying facial muscles and knowledge of how their faces change shape as their muscles contract and relax. Differences in their faces before and after routine surgery were then compared to identify expressions associated with pain. 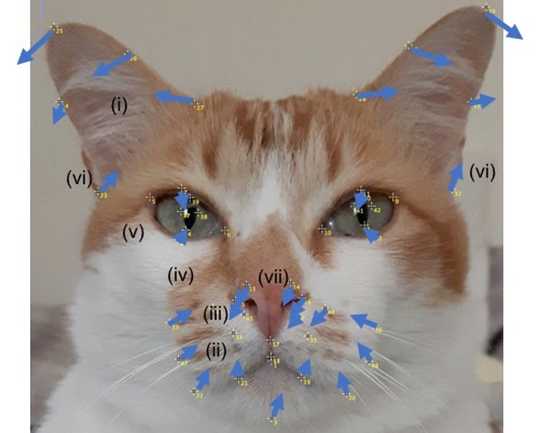 (i) Ears narrowed and further apart from each other

(vi) Subtle differences in the shape of the cat’s outer ears, with their right ear a little narrower and further down the side of their face

(vii) Nose positioned downwards towards the mouth, away from the eyes, angled a little more to the left side of their face.

While these changes in expression may be obvious in individual cats, at a population level these were quite subtle, probably due to the general variability in the appearance of different cats’ faces. This suggests that in every day, practical situations, such as when at the vet, pain expressions could be easily missed, especially if the vet doesn’t know what the cat’s face usually looks like (their “resting cat face”).

The good news is, though, that owners may be better at detecting these subtle changes, and one day there might even be an app available to help us determine if our cats are likely to be in pain or not. This novel approach could also be developed to assess a range of other expressions and emotions, and in a range of other species. So we might soon actually have something that helps us communicate better with our pets, at the tips of our fingers.

Dogs Really Can Chase Away Loneliness

How Do Animals Feel About Clothes and Costumes?