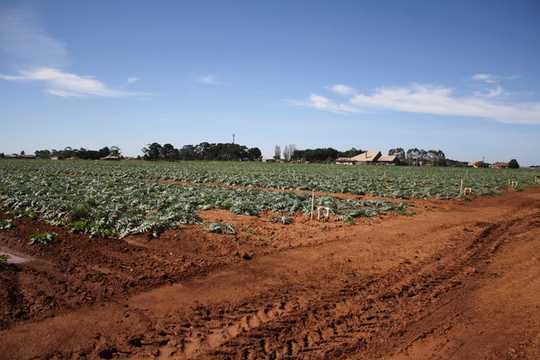 Australians eat a lot of water – the water that is used to produce our food. New findings from our Foodprint Melbourne study estimate that more than 475 litres of water is used to grow each person’s food every day.

This is just the irrigation water used to grow our food. We consume much more than 475 L if you include rainwater (which isn’t tracked in national water accounts) or water used in processing and manufacturing.

The amount of water needed to feed Australia will increase as the population grows, but the availability of water for food production is likely to decrease, due to the impacts of climate change and greater competition. This could reduce food production in the nation’s major food bowl, the Murray-Darling Basin.

A lack of water for food production could lead to rising food prices, as was seen during Australia’s Millennium Drought. Between 2005 and 2007 food prices increased at twice the rate of the Consumer Price Index. Fruit and vegetable prices increased by 33-43%.

As competition for water increases, recycled water is likely to become more important. Recycled water can be used to produce food if treated to a high standard.

It is already used to produce food in irrigation schemes near Melbourne and Adelaide that use water from city water treatment plants. But relatively little of the available recycled water is used. Recycled water accounts for just 1% of the irrigation water used for agriculture in Australia.

City fringe foodbowls present a unique opportunity to reduce the vulnerability of food production to drought, because they are close to sources of recycled water from city water treatment plants.

Melbourne has two main treatment plants in the east and west, which are close to key vegetable-growing areas in Melbourne’s west (Werribee) and south-east (Casey, Cardinia and the Mornington Peninsula).

Around 6% of the water from these treatment plants is used for agriculture and 10% is used in other ways. The other 84% of the recycled water is disposed of at sea.

Not all of the recycled water produced by Melbourne’s water treatment plants can currently be used for agriculture. A significant amount of the water is produced during winter, outside of the main growing season, and Melbourne lacks the infrastructure to store the recycled water and to pipe it to farmers.

Farmers can also experience issues with water quality. They may need to adjust some farming practices to use recycled water effectively.

However, our findings suggest that just 10% of the recycled water available from the city’s treatment plants could produce enough vegetables to meet around half of the needs of Melbourne’s population. That would make a valuable contribution to the security of the city’s food supply.

Investing for the future

Investments in infrastructure to store and deliver recycled water to more farmers could “drought proof” some parts of Melbourne’s food bowl, securing local vegetable production in these areas.

Similar arguments have been made recently in South Australia. A proposal to store recycled water produced during winter at one of Australia’s largest recycled water schemes, the Virginia Pipeline Scheme, would make water available to farmers during the growing season.

The importance of investing in infrastructure to use recycled water for food production became clear in Victoria during Australia’s Millennium Drought. In 2004, the Victorian government decided to invest in upgrading treatment at Melbourne’s Western Treatment Plant at Werribee. This meant recycled water could be used as a “supplementary” source of water for vegetable farmers in nearby Werribee South, one of the state’s most important areas of vegetable production.

By 2006, very little river or groundwater was available. Recycled water became the main source of water for vegetable growers in the area, enabling production to continue through the drought.

Australia has some of the largest recycled water initiatives in the world. The use of recycled water for agriculture is also growing in other regions experiencing water pressures, such as California.

As a dry region that is likely to become drier in future, there are good reasons for Australia to expand the use of recycled water for food production, particularly in city food bowls, and to invest now in infrastructure that will secure supplies of local fresh foods for the future.