There’s something appealing about seeding a yard or garden with the plants that belong there. And in the era of drought and climate change, it’s more effective, too.

Until a year ago, my husband and I didn’t think much about landscaping. We had spent our adult lives renting apartments, most recently in Brooklyn. But when he landed a job in Chattanooga, one of the things that excited us about home ownership was the chance to grow a garden—not just a few tomatoes in a container on the front stoop, but a real garden with vegetables and herbs and maybe a few blueberry bushes. The house we chose—a brand-new craftsman-style structure on a small lot—offered the perfect blank slate: an approximately 40-by-60-foot backyard rectangle of newly seeded grass, ready for us to sculpt it into whatever kind of arrangement we wanted.

So what did we want? As scientists, we thought it might be nice to take inspiration from the diverse palette of plants that have long sprouted in the woods and hills of southern Appalachia and the Cumberland Plateau. But that nature, it turned out, wasn’t so easy to come by in our little piece of the world.

Invasive kudzu and ivy creep along the edge of our street. A privet hedge, shrubbery from overseas that was probably planted by a former neighbor, covers a six-foot dropoff between our sloping yard and the road. And billows of Asian wisteria bloom in the trees that cover the steep lot across the street. We’re transplants to Tennessee ourselves, so maybe we shouldn’t judge too harshly, but within our landscape, invasive plants appear to be taking over. 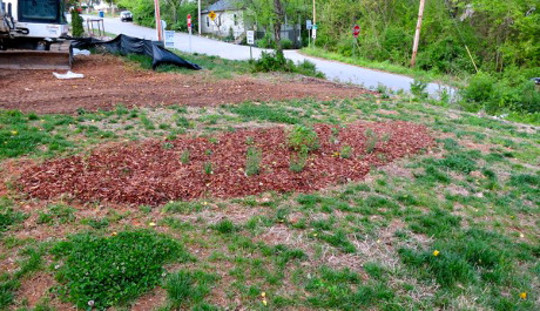 So bringing back native vegetation felt like it might be good stewardship of property, and a chance to support birds and wildlife. As gardening novices, we also hoped native plants would be easier to take care of. Especially in the era of climate change and widespread drought, native plants tend to be a smarter choice, says Elias Guerrero, a horticulturist at the Lady Bird Johnson Wildflower Center at the University of Texas at Austin. They don’t require fertilizer to thrive in native soil, and they generally need little or no supplemental water once they’re established.

It turns out, though, that going native can be more complicated than it sounds—which is probably why so many people choose to plant exotics in the first place. Here’s what we learned from our gardening quest, and how you can go native in your yard, too.

You Gotta Start Somewhere, So Why Not Start Big?

Other than the “go native” concept, we had no idea what to plant or where to start. So last September we headed to the semiannual native plant sale at Chattanooga’s Arboretum and Nature Center. By the time we showed up on Sunday, the sale’s third day, much of the selection had been picked over. Volunteers asked us what we were looking for and how they could help. We shrugged. We wandered among wildflowers, shrubs, and trees with no clear direction.

Finally, one brave soul sliced through our indecision and suggested starting with trees. Fall was the best time to plant them, he said, and they would provide the initial large interest pieces, the shapes that we could build the rest of our yard around. (The volunteer’s advice was sound; when I checked in later with Fred Spicer, CEO of the Birmingham Botanical Garden, he had similar guidance about starting with trees and shrubs to provide a general footprint for your landscape.) 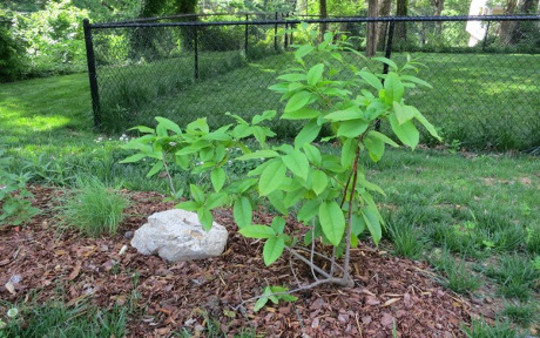 We finally left with two trees, a sourwood and a big-leaf magnolia, just a couple feet tall. And we got his detailed recommendations for planting, breaking up the roots, and mixing in some mushroom compost and topsoil. The next weekend we chose our spots and put our two tiny trees in the ground. Cooler weather arrived, and the sourwood’s leaves warmed to a rich red and fell. By Thanksgiving, both had gone dormant for the season.

As spring has warmed our yard, our sourwood (above) has burst forth with thick bunches of green leaves. The magnolia’s broad leaves have emerged from a thick pod and now stretch skyward like blades of an earthbound fan.

Research and Planning Is Your Friend

We walked away from that big gardening sale with more than just two trees. As scientists, we’re used to digging into a new problem with intensive research, and the sale provided us with some great new resources. I bought a reference book, Gardening with Native Plants of the South and checked out Plant Hardiness Zone maps to see what would do well in our new climate. The maps color code locations based on winter temperatures, which helps gardeners pick plants that will thrive in their locales.

Photo: Sarah WebbWe also did field research in our own backyard. Winter brought a variety of birds—the ones we expected, like cardinals, blue jays, robins, and mockingbirds—and other birds less familiar to us, like Eastern towhees. So I considered attractive plants that might produce berries for the birds, like the American beautyberry.

I started to think about wildflowers and native grasses that would attract pollinators to our little corner of nature. By planting milkweed, we could provide a vital food source for monarch butterflies, which are decreasing in number. And I looked for other colorful wildflowers that would support honeybees and attract hummingbirds and other pollinators.

I also studied lists of native plants and their needs. (We have a sunny back yard with rocky, clay soil. Shade-loving plants will not be happy here.) I attended a native plant symposium one Saturday, and I picked up a few plants from vendors. But in the meantime I studied images, heights, locations, bloom timing and color combinations in books and on the Internet, diagramming our backyard and deciding on the rough placement of the plants relative our new trees at my desk between work projects. I paced the backyard mentally mapping the space, imagining a future fence, a vegetable garden, and a mix of colored flowers. I zeroed in on specific plants, such as one of the many lovely azaleas native to southern Appalachia, and I hoped to bring at least one of those shrubs home.

Do What Makes Sense for You

Though I loved the idea of going completely native, we decided to balance that idea with practicality, at least for now. We live on a small lot in the city near many other homes. If we converted our lawn to meadow, we could run afoul of local weed ordinances. Lawn grass makes sense for paths and sitting areas, but we’re also content with the Dutch white clover that has sprung up on its own throughout our yard.

Plus, even though our lawn grass is patchy at best right now, we weren’t ready to allow our space to go completely wild. So I settled on two native beds, 10 to 20 feet long, that would serve as green spaces between us and our neighbors, and I started planning for the spring edition of the native plant sale at the Arboretum and Nature Center in late March. I knew from our trip in the fall that if I wanted azaleas—and I did—that I would need to show up early. They go fast.

And indeed, even though that Friday morning was a soggy mess, a volunteer counted me as number 82 just 10 minutes after the gates opened. (Eighty-two? Nearly 100 people arrived before me?) I started with azaleas and headed down the right row, worried that I had missed my chance. But I picked one of the last two piedmont azaleas, appreciating their nearly white, funnel-shaped flowers and hair-like stamens. I found most of what I was after, filling a cart and more with yellow sundrops and golden black-eyed Susans, purple coneflowers and milkweed, grasses and a beautyberry.

Be Ready To Work—and Be Patient

Now that we had our selections, planting the beds proved to be an all-weekend project. My husband and I bought more tools and supplies, then struggled to break up the packed clay and dig up rocks buried just beneath the surface. He bore the brunt of the ground breaking, twisting earth with a garden weasel and digging up large rocks. I followed with a hoe and a trowel, removing grass and smaller rocks and digging deep enough to nestle the small plants in the ground. 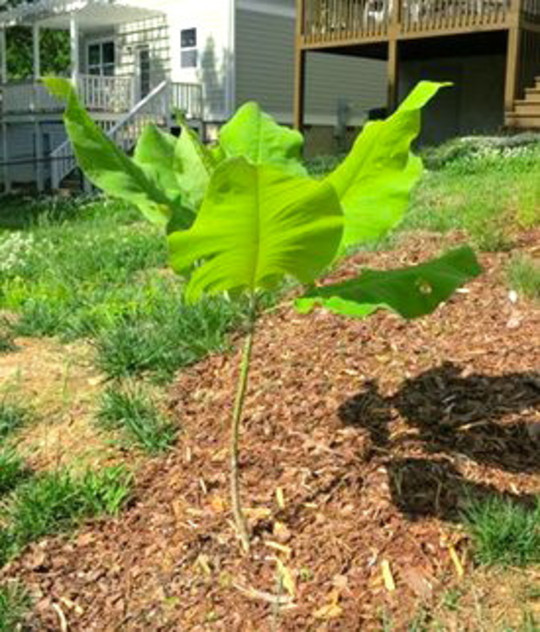 Photo: Sarah Webb But two days, a blister, and many sore muscles later, we could look off our back porch onto two new oval beds, one 11-by-3-feet and the other 19-by-6-feet, filled with the blooms we had chosen and planted ourselves. Our two tiny trees look far less lonely than they did a few short days ago.

I view this adventure as a long-term experiment. My husband and I did the research, made our choices, and set the process in motion. Now we’ll water our plants while they establish themselves, but mostly we’ll watch and wait over the next several months to see what happens.

My husband keeps asking me: “How big will that beautyberry plant grow?” Right now it’s an 8-inch stick with a few green buds, but it could potentially expand into a bush up to five feet high and wide. Too soon to tell. This process is an exercise in patience.

In the end, I hope our yard will become an island of food for the wildlife that surrounds us and a colorful oasis for us to enjoy all year long. But I also recognize that this is just one step. We’ll add, remove, and make changes, and it may take years before our plants reach their potential.

But that’s OK; we’re hoping to stay in this house for the long haul. When our big-leaf magnolia blooms for the first time in, say, 15 years, we plan to be here to enjoy it.

Sarah Webb is a chemist and freelance journalist, covering science, health and technology. She's written for many publication including Discover, Science News, and Scientific American, and lives in Chattanooga, Tennessee with her husband, two cats, and a Senegal parrot.

The Earth Only Endures: On Reconnecting with Nature and Our Place in It  --  by Jules Pretty.

For most of human history, we have lived our daily lives in a close relationship with the land. Yet now, for the first time, more people are living in urban rather than rural areas, bringing about an estrangement. This book, by acclaimed author Jules Pretty, is fundamentally about our relationship with nature, animals and places. A series of interlinked essays leads readers on a voyage that weaves through the themes of connection and estrangement between humans and nature. The journey shows how our modern lifestyles and economies would need six or eight Earths if the entire world's population adopted our profligate ways. Jules Pretty shows that we are rendering our own world inhospitable and so risk losing what it means to be human: unless we make substantial changes, Gaia threatens to become Grendel. Ultimately, however, the book offers glimpses of an optimistic future for humanity, in the very face of climate change and pending global environmental catastrophe.