It's that time of year: Bicyclists young and old are lubing chains and dusting off cheap supermarket bikes, top-of-the line Treks and everything in between.

A bike, of course, offers a way to get exercise, reduce your carbon footprint or just have fun. But biking activity, in large part, is driven by the pedaling opportunities available in your community. And just about no matter where you are in the United States, the opportunities available aren't going to change much in the near future, according to a cycling group's analysis.

"States are not planning to spend all that much on biking and walking over the next four years," said Ken McLeod, a legal specialist for Advocacy Advance, a partnership between the League of American Bicyclists and the Alliance for Biking & Walking.

Something For Bicyclists and Pedestrians

The 112-page report, Lifting the Veil on Bicycle and Pedestrian Spending, also cast a wider net, looking at road projects that included a bike or pedestrian element, such as a bike lane. 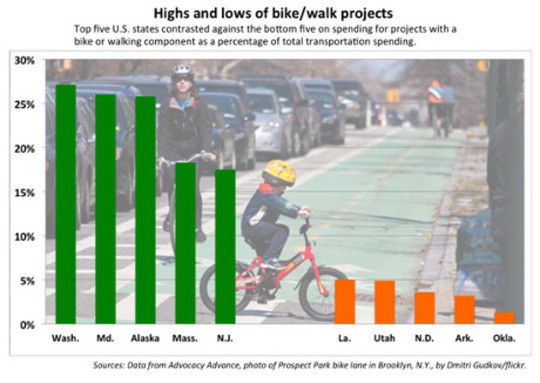 Washington, Maryland, Alaska, Massachusetts and New Jersey lead the nation in that category. Washington tops the list, with 27.1 percent of all planned project spending offering something for bikers or pedestrians, according to the 112-page analysis by the cyclists' league.

Five states have earmarked 5 percent or less of their transportation cash for projects with a biking or walking component, with Oklahoma's 1.3 percent at the bottom, the analysis found.

Biking is not all about sunshine and tight shorts – it's increasingly a serious mode of transportation. The number of bike commuters has increased about 10 percent since 2011 and 60 percent since 2000, the U.S. Census estimates.

Does it make a difference? For your carbon footprint, yes. Total emissions to make and maintain a bike and fuel its rider is about 25 grams of carbon dioxide per mile, compared to 433 grams per mile to produce, maintain and drive a car, according to a 2011 report by the European Cyclists' Federation.

Healthier communities have more bike lanes and sidewalks. Researchers have found that cities and states with more bikers and walkers had less obesity and lower diabetes rates.

But drivers, at least in the United States, still get the bulk of transportation resources: For every $1 spent on transportation projects by states, about 2 cents goes toward biking and walking projects, according to an analysis by the Alliance for Biking & Walking.

"We need transportation choices and options in how we get out and about," said Christy Kwan, an outreach coordinator for Advocacy Advance. "It's important for our environment, health and economy."

This article originally appeared on The Daily Climate

Brian Bienkowski serves as senior editor and staff writer at Environmental Health News. He was part of the reporting team that won an Oakes Award honorable mention for EHN's 2012 series, Pollution, Poverty, People of Color. He also won a 2013 award for Outstanding Beat Reporting from the Society of Environmental Journalists for his coverage of the Great Lakes region at EHN. Follow him on Twitter @BrianBienkowski.

Bikenomics: How Bicycling Can Save the Economy
by Elly Blue.

Bikenomics provides a compelling new perspective on ways to get around, transporting our families, going to work and how do we chose to spend our money. Bicycling is a workable lifestyle that could help bring personal need with sustainable economical growth for most cities, communes and nations around the globe. The book tells stories of people, businesses, organizations and cities who are investing in two-wheeled transportation. The multifaceted North american bicycle movement is revealed, with its contradictions and challenges, successes, and visions.