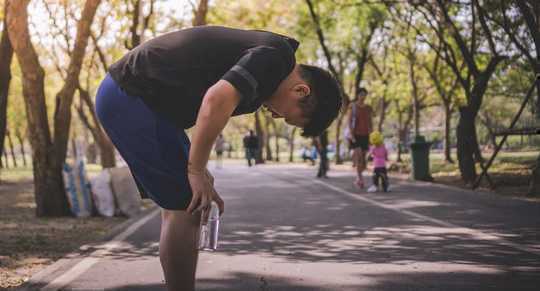 Exercising too much, too hard can lead not only to burnout but sometimes to a serious condition that can harm the kidneys. Thayut Sutheeravut/Shutterstock.com

Every 365.25 days, when the Earth completes a full orbit around the Sun, we humans have the opportunity to hit the reset button and become fitter, finer versions of ourselves. As usual for January, social media is humming with advice on how to eat better, exercise regularly, lose weight and remain healthy. We feel particularly invincible at this time of year, armed with renewed vigor and motivation to purge ourselves from previous indulgences and our couch-potato ways.

The New Year is also the time when our overzealous, instant-gratification selves emerge, and we do too much exercise too soon to make up for lost time. Exhaustive muscular work, especially following a period of inactivity, can cause mechanical and chemical disruptions to muscle cell membranes which trigger the muscle cells to burst.

I am an exercise physiologist and sports medicine specialist who studies exercise-associated collapse. I am seeing and hearing of more incidents of skeletal muscle ruptures that are causing harm in other parts of the body.

This information is not designed to scare people back onto the couch. The key take-away from highlighting these cases is to remind athletes, coaches and mere mortals that the desired physiological response to a training stimulus requires both a gradual buildup period and period of recovery in between training sessions. 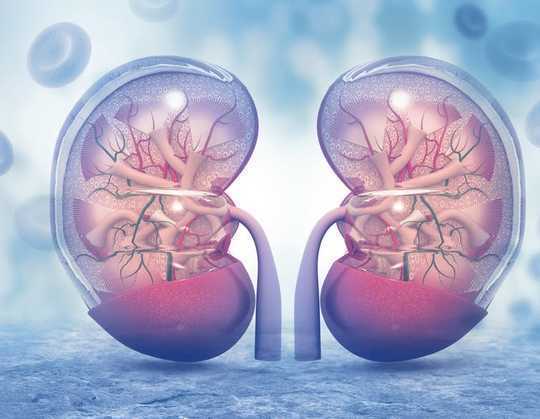 A cross-section of the human kidneys, which can be injured when muscle cells rupture and send toxic chemicals into the bloodstream. crystal light/Shutterstock.com

Myoglobin, in particular, is a big, red protein that can block the kidney filtration system, or renal tubules, that serve as kidney plumbing. It also can dissociate into toxic byproducts that injure kidneys. In rare cases, too much myoglobin in the bloodstream can stop kidney function altogether, as happened with a 27-year old marathon runner who died from kidney failure.

In a study we conducted on college swimmers, we saw a cluster of rhabdomyolysis, in which six out of 34 swimmers were hospitalized after participating in a 20-minute or so “arm competition” to see how many pull-ups, rows and bench presses they could complete. Cases of “symptomatic rhabdo,” or those needing medical treatment, appear to be increasing within collegiate sports teams at an alarming rate, with the characteristic appearance seen in football players returning to January practice after a season-ending holiday layoff.

To date, 17 cases of team rhabdo have occurred from doing “too much, too soon, too fast” and include a variety of sports such as football, swimming, lacrosse, soccer, track, basketball, softball, volleyball and golf.

So, what about us mere mortals trying to get back in shape? Any physical activity that is either new or excessive can cause symptomatic rhabdo. Excessive gardening, weightlifting, CrossFit type activities and even a routine Army physical fitness test have triggered symptomatic rhabdo with kidney injury.

Over 90 cases of rhabdo have been documented after spinning, while 119 high school students in Taiwan ended up in the emergency room after their teacher made them complete 120 push-ups within five minutes. Thus, harmful muscle cell rupture can occur after any degree five minutes to 36 hours of exuberant and/or unaccustomed physical activity.

In combination, gradual training and appropriate recovery allow beneficial muscular, cardiovascular and body composition adaptations to occur, such as building muscle, increasing fitness and losing body fat. Our research confirms that a two-week gradual introduction into training after a layoff is required for muscle cell membranes to fully adapt to training stress.

Subclinical rhabdo, or muscle breakdown without acute kidney injury or debilitating symptoms, is common and represents the typical response to training which does not require medical treatment. However, hard exercise, especially following a layoff, with the following signs or symptoms within one to two days requires an appropriate medical examination:

There are risk factors which increase the likelihood of developing rhabdo following a workout. These risk factors include exercising in the heat, dehydration or overhydration, binge drinking, excessive coffee consumption, extreme dietary practices (vegetarian or high protein) and possessing the sickle cell trait. Both men and women can develop symptomatic rhabdo, although we see more cases in men. Smaller arm muscles appear more susceptible to rupture after five to 30 minutes of exercise than bigger leg muscles for reasons that remain unclear.

Although symptomatic rhabdomyolysis is uncommon, this emergent complication of exercise should be on everyone’s radar since cases are on the rise. We coaches, trainers, scientists, practitioners and others encourage everyone to reap the joys and benefits of regular exercise training. However, we caution against exercising too much too soon. Self- (or coach-) inflicted skeletal muscle cell explosions are fully preventable with adherence to smart, physiologically sound approaches to training.

What Are Tai Chi Health Benefits?