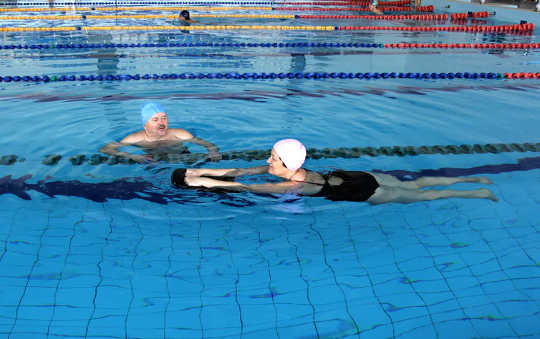 Swimming, aqua-aerobics, and other water-based exercises are popular for people aged 55 and older to keep fit without putting strain on the joints. Studies show that water-based exercises have many benefits, including improving gait, balance and mobility. It’s also thought to offer benefits as part of rehabilitation programmes for peripheral arterial disease, in which arteries in the legs, stomach, arms and head narrow.

But while water-based exercises are shown to have benefits for other aspects of health, until now there’s been limited evidence on whether it’s as beneficial on reducing cardiovascular disease risk for older adults and improving their heart health.

Our study enrolled 80 people over the age of 55 with normal blood pressure and without pre-existing clinical conditions, such as diabetes. We avoided recruiting people who regularly performed high-intensity exercise, such as crossfit. This was to ensure that all the exercise regimes we compared were as similar as possible, and because high-intensity exercise can be difficult to perform in water. 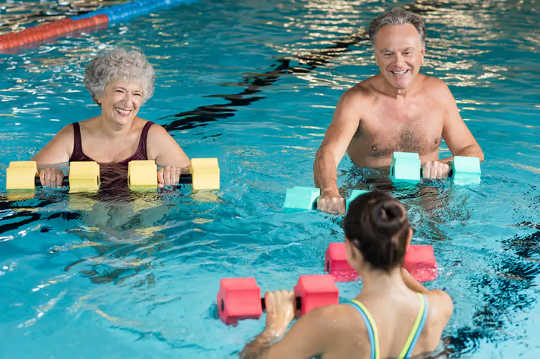 Water-based exercises can often be easier on the joints as well. Rido/ Shutterstock

Our participants were exercising on average four times per week, for at least six months. We compared people who trained in the water against those who trained in a gym or took exercise classes, and those who did a mixture of both types of exercises. We also compared this data against a reference group who didn’t exercise at all.

In order to see what effect exercise was having on cardiovascular health, we measured how efficient the inner vein lining (endothelium) of their small veins and large arteries were. Endothelium is crucial for minimising cardiovascular disease risk at any age.

We found that all three modes of exercise offer similar benefits to our arteries and small veins. The mechanism behind these findings isn’t very clear. However, it’s likely that this is because exercise can increase the production of nitric oxide in our body. This is a key component for preserving endothelial function in both small veins and arteries. So the greater the nitric oxide production, the better arteries and small veins can work.

Endothelial function for the exercise groups were also significantly better than the function in the inactive group. This suggests that for older adults, all exercise plays an important role in protecting against cardiovascular disease, whether it’s performed in or out of water.

Exercising at every age

Cardiovascular disease remains a main cause of death for older people. While exercise – either alone or alongside a healthy diet – can protect against cardiovascular disease, older people often don’t get as much exercise as they should. For example, statistics show that only 13% of women over 75 meet daily physical activity recommendations for their age group.

There are many reasons why older people might not exercise, including fear of injury and lack of confidence in using exercise equipment. But this could mean that they’re missing out on important heart benefits that can protect against cardiovascular disease. This is why promoting forms of exercise that older people feel comfortable doing – and that they want to do – need to be explored and promoted.

This is why our findings may be particularly important, as we’re the first to directly show that water-based exercise is as good for cardiovascular health as exercising in a gym, for the older age-group. This means people can choose a form of exercise that causes less pain, stress, or strain on joints, but will still benefit their heart health. This may be especially good news for people who may be more frail, or for those who are afraid of handling gym equipment.

by Charles James Steward, Coventry University
The term “exercise is medicine” is rightfully well publicised. It’s one of the best ways to stay healthy, yet medicine doesn’t work if you aren’t prepared to take it.

30 Minutes' Exercise Won't Counteract Sitting All Day... What Can?

by Sebastien Chastin and Keith Diaz
It’s recommended we do at least 30 minutes of exercise a day – or 150 minutes a week – to stay healthy. But 30 minutes accounts for just 2% of the day. And many of us spend most of the rest of the…

by Matthew Haines, University of Huddersfield
High-intensity interval training (HIIT) workouts have become popular in recent years for a number of reasons. They don’t require as much time as a regular workout (some can take as little as 10…

Going Back To The Gym: How To Avoid Injuries

by Matthew Wright, Mark Richardson and Paul Chesterton, Teesside University
Injuries happen when training load exceeds tissue tolerance – so basically, when you do more than your body is capable of. Fatigue, muscle-tendon strength, joint range of motion, and previous injury…

by Laura Khoudari
Figuring out how to initiate (or return) to exercise in a way that feels emotionally and physically safe after experiencing illness, accidents, or acts of violence can be challenging, triggering, and…

by Jamie Hartmann-Boyce, University of Oxford
A new US study shows that people who are less physically active are more likely to be hospitalised and die with COVID-19. According to these new calculations, being inactive...

Vegan Or Mediterranean Diet Which Is Better For Heart Health?