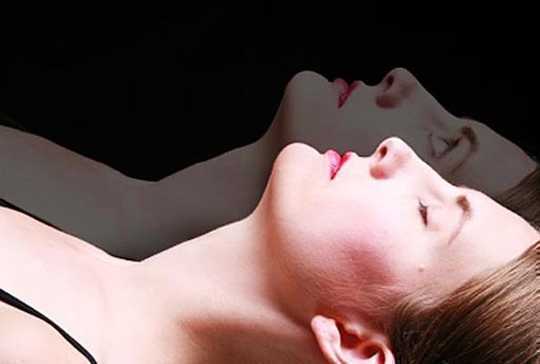 Sleep paralysis is a type of REM parasomnia or abnormal behavior that takes place during the REM sleep cycle. Also known as sleep atonia, this condition refers to the feeling of being conscious but unable to move while passing between the stages of sleep and waking. During sleep paralysis, a person can feel as if someone is choking them or sitting on their chest. It is also not uncommon to have hallucinations as a result of a sleep paralysis episode.

What Actually Happens When We Sleep?

As a person sleeps, the body alternates between REM (rapid eye movement) and NREM (non-rapid eye movement) phases, with most of the time spent in NREM. One REM-NREM cycle usually lasts for about 90 minutes, and 7-8 hours of sleep typically includes five cycles. During NREM, the body relaxes and replenishes itself by releasing hormones for bone, muscle, and skin repair. In this cycle, physical energy is restored, and the immune system is strengthened. As the body shifts to REM sleep, blood pressure, heart rate, and respiration rate increase. This is the stage when dreams occur, as evidenced by EEGs showing neurons firing in intensive bursts, sometimes even more intensive than when a person is awake. During REM sleep, the body may be paralyzed as a precaution from people acting out their dreams and potentially causing harm to themselves or others.

“Sleep paralysis happens when the body is still in REM sleep, but the brain is awake. Sensory systems, eye movement, and breathing are the same as in wakefulness, but the body is paralyzed.”

Sleep paralysis happens when the body is still in REM sleep, but the brain is awake. Sensory systems, eye movement, and breathing are the same as in wakefulness, but the body is paralyzed. This means that a person is aware of their surroundings, but cannot move or speak until the last stage of REM sleep is complete. Luckily, sleep paralysis is a temporary sensation with episodes usually lasting from a few seconds to a few minutes long. Nevertheless, it can be a terrifying experience that can increase stress, which is known to impact one’s quality of life.

In addition to being paralyzed, it is also not uncommon for people with sleep paralysis to experience sleep hallucinations. Sleep hallucinations are usually visual or auditory and involve hearing random noises or seeing moving images that may seem extremely real. These are imaginary sensations, the result of a disrupted boundary between REM sleep and wakefulness. When hallucinations and sleep paralysis co-occur, many people believe it to be one instead of two separate conditions. They often remember the hallucinations as a dream in which they felt trapped or were unable to move.

As a result of the visual and auditory hallucinations that occur with sleep paralysis, this condition has been historically connected to supernatural elements, such as the appearance of witches or female demons. In more modern times, people who have experienced sleep paralysis claim to see incoherent images or sense an evil presence in the room, such as intruders or ghosts. These hallucinations have even been linked to alien abductions. Another common sensation during sleep paralysis is an “out-of-body” experience, with many patients reporting a feeling of floating out of their body and looking down from a great height.

Who Is at Risk of Experiencing Sleep Paralysis?

Although it is most common among teens, people of any age can experience sleep paralysis. This condition can also have a genetic component. A particular variant in the PER2 gene increases the risk of sleep paralysis. Since the PER2 geneA sequence of nucleic acids that forms a unit of genetic inh... regulates the sleep-wake cycle, or a person’s circadian rhythm, it’s not surprising that interrupted or irregular sleep patterns increase the likelihood of a person experiencing sleep paralysis episodes.

Sleep disorders such as insomnia and narcolepsy can also lead to sleep paralysis. Narcolepsy is a neurological disorder characterized by excessive daytime sleepiness and cataplexy (sudden loss of muscle tone). It is estimated that about one-fourth of people who suffer from narcolepsy also experience sleep paralysis, a large enough number to categorize sleep paralysis as one of the symptoms of this sleep disorder.

Insomnia has also been associated with sleep paralysis. Multiple studies reveal that insomnia symptoms, such as difficulty falling asleep or staying asleep, can significantly predict the occurrence of sleep paralysis episodes. Again, this is not surprising as lack of sleep and irregular sleep habits have been linked to a person’s susceptibility to sleep paralysis.

Often, there is no need to consult a professional as sleep paralysis is not a serious condition. However, recurrent episodes of sleep paralysis that impair daily activities can be a cause for concern and medical attention is required. To determine whether someone is suffering from sleep paralysis, a doctor will most likely order an overnight study to measure brain waves, heart and respiratory rates, and eye movement – commonly referred to a polysomnogram (PSG). PSG recordings of sleep paralysis episodes show that sleep paralysis is a blend between elements of wakefulness and REM sleep. During an episode of paralysis, EEGs show increased alpha activity, which is linked to quiet wakefulness and is abnormal during the REM sleep stage. Also during this time, an electromyogram (EMG) shows a flat-lined signal, indicating muscle paralysis. Other tests might include a Multiple Sleep Latency Test (MSLT), which measures how fast the patient can fall asleep in the day after a regular night’s sleep. The MSLT does not determine sleep paralysis as well as a PSG, though it is useful in detecting narcolepsy or insomnia, both of which can lead to sleep paralysis episodes.

“As sleep paralysis is associated with symptoms of insomnia and narcolepsy, sticking to a sleep routine might treat some of the insomnia effects and thus reduce the risk of sleep paralysis.”

While sleep paralysis may not be as common or as dangerous as other sleep-related conditions, it can still negatively affect a person’s health and well-being. Moreover, the psychological effects that accompany the condition should not be ignored, as higher levels of anxiety and stress can lead to more serious mental health issues. The best thing one can do when faced with this disturbing condition is try to remain calm and take comfort from the fact that it will all be over in a few seconds.

Chief author and editor at DisturbMeNot.co. Besides doing thorough research into the factors that affect our sleep, I work tightly with other sleep experts and doctors to provide you with valuable information and helpful advice.

by U. Oregon
A new gene therapy could eventually provide an alternative treatment for Fuchs’ endothelial corneal dystrophy, a genetic eye disease that affects roughly one in 2,000 people globally.

by Esther Robards-Forbes - UT Austin
Photos of a person’s living space can accurately point at personality traits and the mood of the people who live there, especially as a person gets older, according to a new study.

These factors raise the risk of nicotine dependence

A slow and painful journey: why did it take over 20 years to approve the new Alzheimer's drug?

by Ralph N. Martins, Professor and Chair in Ageing and Alzheimer’s Disease, Edith Cowan University
A new drug to treat Alzheimer’s disease was last week given accelerated approval by the United States Food and Drug Administration.

Undiagnosed dementia may be way more common than thought

by Laura Bailey-Michigan
Only 1 in 10 older adults in a large national survey who were found to have cognitive impairment consistent with dementia reported a formal medical diagnosis of the condition.

Lifespans of 130 years could be possible this century

by Kim Eckart-Washington
Extreme longevity likely will continue to rise slowly by the end of this century, according to new research, with estimates showing that a lifespan of 125 years, or even 130 years, is possible.