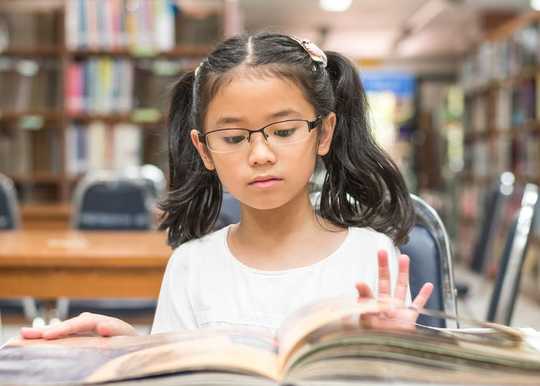 Reading problem or problem with the lights? shutterstock/ Chinnapong

If you step into any British classroom, chances are you’ll be greeted by the bright white light of fluorescent lamps. Schools began to introduce fluorescent lighting in the mid 1950s and rows of these low cost, long life, high efficacy lamps tend to be the lighting of choice in many schools around the world.

But some fluorescent lighting could actually be causing eye-strain and headaches. This is down to the fact that many fluorescent tubes (but not all) vary in colour and brightness continually. This is because the light of fluorescent bulbs is produced by a gas discharge (like lightning) twice with each cycle of the alternating current.

The variation in colour comes about because ultraviolet light from the discharge is converted to visible light by a coating of phosphor on the inside of the lamp and this continues to glow between flashes. The resulting coloured flicker is too rapid to be seen, but it results in an electrical signal from the back of the eye, indicating that our cells respond to the variation.

This rapid fluctuation of light from fluorescent lamps is known to affect the way our eyes move across text and it interferes with the performance of visual tasks. And while it does not affect everybody, it can have a serious effect on a few. Indeed, one study found incidences of headaches and eye-strain in a London office halved when the fluorescent flicker was reduced.

How colour can help

Some children affected by the flicker see an improvement in the clarity of text when a sheet of coloured plastic – a coloured overlay – is placed on the page. Children who use coloured overlays find they are able to read more quickly – and often report a reduction in eye strain and headaches. One possible reason is that a coloured filter can reduce the variation in colour that occurs with the old-fashioned fluorescent lighting. 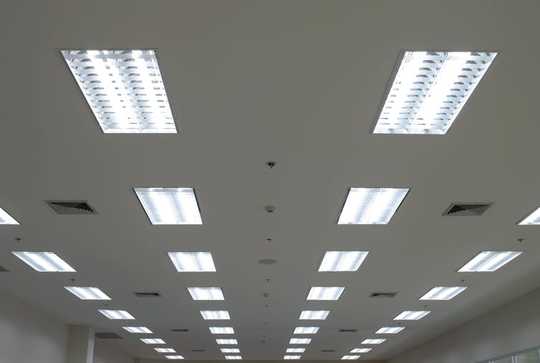 If you have to spend a lot of time under fluorescent light, make sure fluorescent lamps are controlled by high-frequency electronic circuitry. Shutterstock/addkm

Some colours will be more suitable than others at reducing any effects of the rapid variation in colour and brightness from fluorescent lights, depending on the phosphors in the lamps, and how much the children have experienced the flicker and adapted to it.

Experience has also shown that some children will use their overlays for a limited time until they report the overlay is no longer effective. When this occurs, a change in colour can sometimes restore the beneficial effect. Many children who find coloured overlays useful benefit from wearing glasses with coloured lenses. Indeed, research shows that people who wear coloured lenses experience long-term effects of adaptation on their perception of colour.

Many children, for example, who benefit from coloured overlays suffer headaches and have a history of migraine in the family. The brain is excitable in people with migraine, and their brains use large amounts of oxygen when they look at things they find uncomfortable.

But research has found that normal oxygenation is restored with coloured filters – provided the colour is individually chosen as comfortable for viewing text. Indeed, people with migraine often have an aversion to fluorescent lighting, and for reading, often choose colours that are not typical of conventional lighting.

Clearly, then, it would be preferable for schools and workplaces to replace the old-fashioned fluorescent lighting with newer electronic circuitry that removes the 100-per-second variation. This would not only be healthier for children and teachers but also reduce the running costs. This is particularly important given that one in five children in England cannot read well by the age of 11 – and, for at least some of these children, fluorescent lighting could be part of the problem.