Too Little Sleep Can Be Bad For Women’s Bone Density 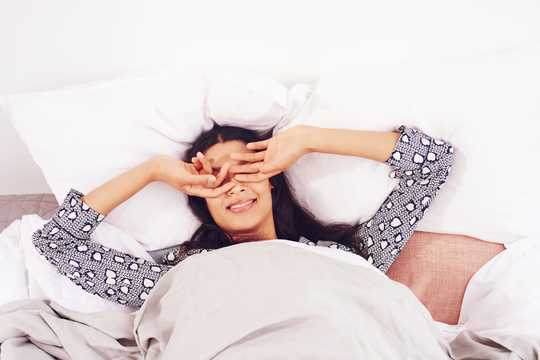 Getting five or fewer hours of sleep a night is associated with low bone mineral density and higher odds of osteoporosis, researchers report.

“Our study suggests that sleep may negatively impact bone health, adding to the list of the negative health impacts of poor sleep,” says lead author Heather Ochs-Balcom, associate professor of epidemiology and environmental health at the University at Buffalo School of Public Health and Health Professions.

“I hope that it can also serve as a reminder to strive for the recommended seven or more hours of sleep per night for our physical and mental health.”

The study, published in the Journal of Bone and Mineral Research, focused on 11,084 postmenopausal US women from the Women’s Health Initiative. Women who self-reported sleeping five hours or less per night had significantly lower bone mineral density at four sites—whole body, hip, neck, and spine—compared to women who slept seven hours a night, a difference equivalent to one year of aging.

Researchers note there was no statistical difference among women who slept more than seven hours.

The body undergoes an array of healthy processes during sleep, including bone remodeling, during which old tissue is removed and new bone tissue forms.

“There’s a rhythm throughout the day. If you are sleeping less, one possible explanation is that bone remodeling isn’t happening properly,” Ochs-Balcom says.

The current study follows research the team published last year that found that women who had short sleep had higher likelihood of sustaining a fracture.

“The question was, is it because they’re up and walking around more, or because they really have lower bone mineral density?” Ochs-Balcom says. “I said why don’t we take a look at it because we have a sample of BMD scans from 11,000 women. This helps tell more of the story.”

While the findings might be the stuff of nightmares for older adults, the silver lining is that sleep is something people can control, along with adding in a few extra healthy behaviors.

Poor sleep is linked to a number of adverse health conditions, including obesity, diabetes, hypertension, and cardiovascular disease.

“It’s really important to eat healthy, and physical activity is important for bone health,” Ochs-Balcom says. “That’s the exciting part of this story—most of us have control over when we turn off the lights, when we put the phone down.”