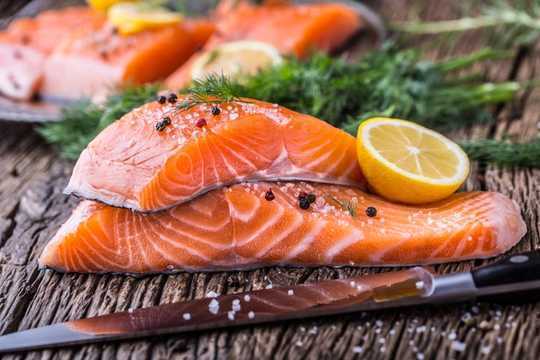 We’re fish fanatics, with salmon in our sights. Marian Weyo/Shutterstock

Salmon is not only tasty but is prized for being low fat and high in rich omega-3 oils. In recent times, salmon has been a staple of the national diet, so much so that wild salmon has given way to a huge global farmed industry, worth US$15.4 billion. Salmon are farmed in net pens suspended from floating collars in the sea. Like other types of farming, quality varies and the industry has sometimes come in for criticism over the health and welfare of fish.

Given the size of the market, criticisms have included the amount of wild fish it takes to rear one salmon – if you’re eating farmed salmon for sustainability reasons, for example, you might worry that it takes 1.3kg of wild feed to produce one kilogramme of salmon.

Environmental campaigners have long made the case that the growth of cage farming salmon results in a net loss of fish because they are fed “marine ingredients”, which includes fishmeal (rendered down low-value fish) and increasingly, processing offcuts from the fishery industry – fish oil that is pressed out of the same fish and more specialised high-value protein ingredients.

But this aquaculture as a whole is a net producer of marine ingredients. Carps – which make up by far the largest proportion of global aquaculture – are fed diets with little or no marine ingredients. Sometimes they are even cultured using no feed at all, instead relying on the natural productivity of ponds, encouraged by fertilisation. Advances in nutrition, together with a rising price, has also led to a decline in the levels of marine ingredients fed to salmon, with protein and oils replaced by vegetable substitutes such as soy and rapeseed oil. 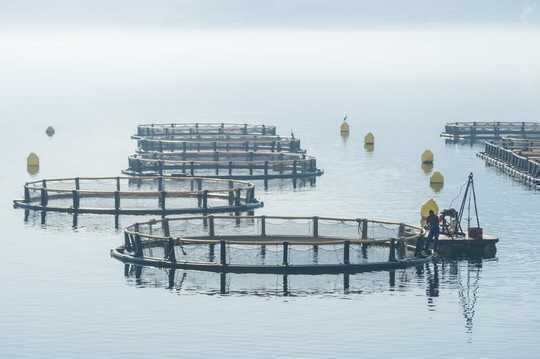 Between the 1970s and 1990s there was a peak in production of “marine ingredients” – used in trans-fats for margarines, and meals for a wide range of livestock, especially pigs and chickens. But as aquaculture grew fast, more of the global supply of fishmeal and oil was directed to feeding farmed fish and shrimp – an increasingly lucrative market. In 2010, aquaculture was taking around 75% of the global supply.

But the rapid growth in demand for marine ingredients coupled with fluctuating supplies led to price hikes that stimulated the development of alternatives. Comparatively little is now used for pig and chicken diets as companies have become more strategic with their use.

But marine ingredients are still important in maintaining the health of fish in aquaculture, especially in early development. And in the case of salmon, they are important in maintaining the quality of the fish, which provide consumers with high levels of omega-3 fatty acid. Indeed, the fastest growth in marine ingredients sales are for high omega 3 oily capsules, taken as dietary supplements.

As farmed fish gets relatively cheaper but the price of marine ingredients to feed them continues to climb, the pressure to find alternatives is likely to continue.

Various plant sources such as processed soy and wheat products have emerged as major substitutes for fishmeal but as much of this has to be imported, local alternatives such as field beans are being researched and trialled in Europe. Outside of Europe, it is still very common to use byproducts from livestock production to feed farmed fish in aquaculture diets such as poultry byproducts, which are regarded as a highly nutritious and cheap protein resource.

Replacing marine oils – which are the only source of long chain omega-3 fatty acids – is a bigger challenge. Initiatives such as GM Camelina, a “transgenic” vegetable oil crop created by transplanting marine plankton genes into oil-seed rape, and which could help cut use of marine ingredients as feed, is likely to remain an issue given public acceptance of genetically modified organisms (GMOs).

Major fish stocks used to produce marine ingredients, however, are now subject to much more intense scrutiny, as are the fish farms that use the feeds, which is leading to both better efficiency and practice. 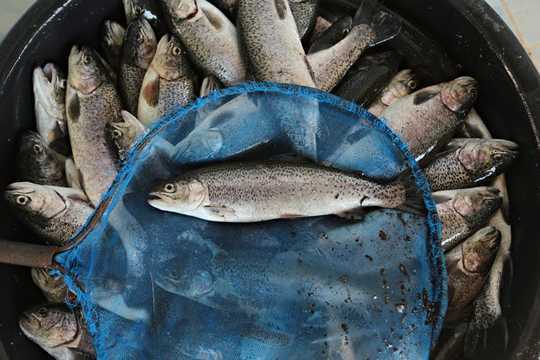 The use of byproducts from sustainable fisheries is also encouraged by all major certification schemes. It is estimated that over a third of the global fishmeal and fish oil supply now comes from byproducts such as herring and other oily fish trimmings.

The potential for increasing the proportion of marine ingredients from these sources is substantial. More than half of a fish often becomes byproduct, and much of this is often wasted. There is also an increased trend towards processed fish in regions, such as in Asia, that have generally preferred to buy whole fish. As demand for farmed fish grows alongside the pressure to limit wild catches, these byproducts will increasingly be required.

A combination of market forces, self-regulation and engagement by environmental groups supports the evolution towards more sustainable aquaculture and better managed fisheries. And it is increasingly something consumers can look out for when they are buying fish. Technologies such as Blockchain, linked to QR codes, and databases accessible through apps, will increasingly allow consumers to dig down into ever more detail of how their food is produced.