Autistic People Are 3 Times More Likely To Have Hallucinations 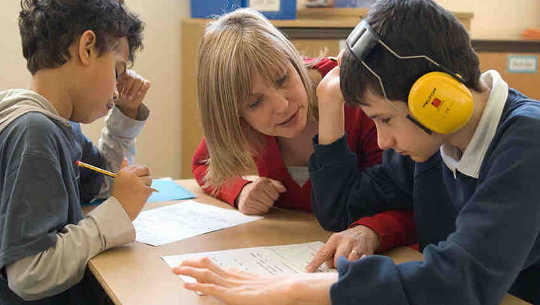 Do you ever hear a sound when there is nothing around to explain it? Or perhaps you have the feeling that someone is nearby when they’re not? Some people have a lot of these experiences. Others, hardly any. Certain mental health conditions, such as schizophrenia, can cause them, but unusual perceptions also happen in people who don’t have mental health problems. A new finding from my research group suggests that autistic adults are particularly likely to have these kinds of experiences.

Until now, scientists didn’t know that hallucinatory type experiences occur in autism, although we’ve known for a long time that autism is associated with more sensitive hearing and sight.

However, unusual hallucinatory perception is different to being sensitive to particular stimuli. Some of the items in the questionnaire asked about changes in stimulus intensity which we might expect to be increased in autism, but other questions focused on strange or distorted perceptions, such as “Do you ever experience unusual burning sensations or other strange feelings in or on your body?” and “Do you ever hear your own thoughts spoken aloud in your head, so that someone near might be able to hear them?” Three times more autistic adults than non-autistic adults responded yes to both of these questions, indicating that our finding doesn’t just reflect more sensitive perception.

Different levels of certain chemicals in the brain (neurotransmitters) may explain why some people have more unusual perceptions than others. Migraines, for example, are often preceded by hallucinations, such as seeing lights and shapes that aren’t there. Similarly, epilepsy can be associated with strange perceptions.

Not the only culprit

The link between unusual perception and autism may not come just from innate differences in chemicals in the brain, however. Recent work suggests that negative experiences, such as being bullied or socially isolated, may lead to hallucinations.

Unfortunately, many autistic people suffer social isolation and bullying, and these negative events may contribute to the development of unusual perceptions. A recent article in The Conversation described how people who face discrimination, such as immigrants, also have more hallucinatory and paranoid feelings than people who are not discriminated against. Similar mechanisms may be at work in autism.

If someone with autism has these experiences then knowing that they are quite common in other people with autism can help to reduce their worry about it. Doctors may not always think to ask people with autism about unusual perceptions, but our research suggests that this could be an important area to discuss in the clinic so that methods can be introduced to help people cope with it when it happens.

Perhaps most crucial is the importance of developing a better understanding of autism in the general public. More and more people are being diagnosed with autism, including a growing number of people who don’t receive a diagnosis until adulthood. Often only small changes are needed to help people with autism integrate more fully into society. These small steps can go a long way to reducing social isolation.

If social isolation and bullying do contribute to the development of unusual perception in autism, then reducing the distress caused by these unusual perceptions is one of many benefits that would be brought about by the creation of a society where autism is more clearly recognised and understood.

Why Hangovers Happen and What You Can Do About It

If Dr Google Is Making You Sick With Worry, You May Have Cyberchondria

Why Many People With Parkinson's Disease Develop An Addiction