Today, nearly 40 percent of U.S. adults and 21 percent of youth are obese. This trend is on the upswing and the worldwide population is becoming more obese – which is increasing the risk of other conditions like Type 2 diabetes and cardiovascular disease whose prevalence has doubled globally in the last 30 years. But you may be surprised to learn that it’s not just food that is making us fat.

Experiments using animal models have shown that exposure to chemicals used in industry and found in plastics, preservatives, pesticides and flame retardants, just to name a few, may be important contributors to the growing number of metabolic disorders – including obesity.

One of the research goals in my lab is to identify environmental chemicals that may contribute to these increased rates of metabolic diseases and to decipher the mechanisms through which they act. This line of work began with the unexpected discovery that a chemical (tributyltin, or TBT) we were studying for other reasons could activate a hormone receptor linked to the development of fat. We went on to show that TBT could make mice exposed during prenatal life fatter and that this trait could be transmitted to future generations.

Our recent study reveals that dibutyltin, a chemical used in the manufacture of a type of plastic called polyvinyl chloride, or PVC, alters glucose metabolism and increases fat storage in mice.

In healthy individuals, the pancreas secretes a hormone called insulin into the bloodstream after a meal when the blood sugar levels rise. Insulin stimulates tissues, such as muscle, fat cells and the brain to absorb glucose from the blood and store it as fat. If the pancreas secretes insulin but tissues are not able to detect it, glucose levels remain unchanged leading to “insulin resistance.”

As an individual becomes overweight, there is an increase in free fatty acids in the blood stream which may contribute to reduced insulin sensitivity in the tissues, leading to increased glucose levels in blood. At early stages, when sugar levels are higher than normal, but not too high, the individual is considered prediabetic. At that stage, prediabetics can make lifestyle changes – lose weight and exercise more – to lower their glucose levels and reduce the risk to develop diabetes.

However, there is evidence in rodents showing that exposure to certain environmental chemicals hampers fat mobilization during periods of fasting and when animals are exposed to a low-fat diet, suggesting that losing weight may be tougher than curbing calories. 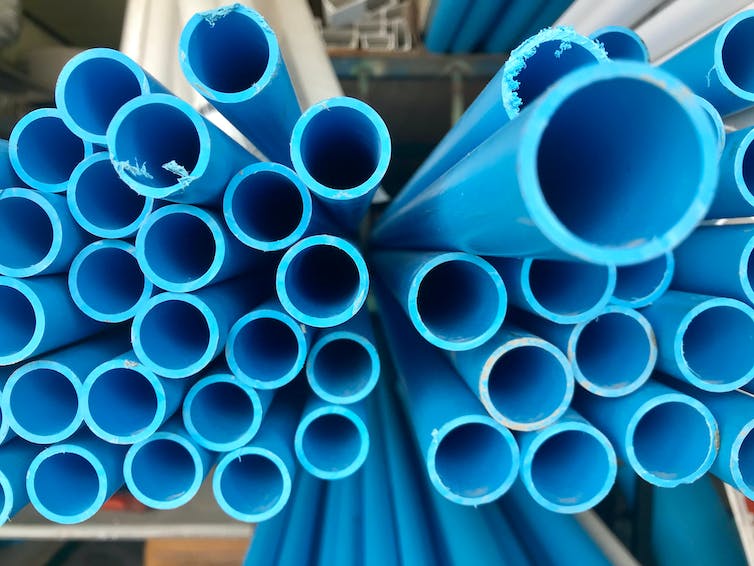 Polyvinyl chloride (PVC) is used in a variety of applications from plumbing to health care to electronics. By SIRIKANLAYA KHLIBNGERN/shutterstock.com

Chemicals in plastics associated with obesity

The most common explanation for obesity is overeating calorie-rich foods and sedentary lifestyle. However, in the last 10 years, a subset of endocrine-disrupting chemicals (EDCs) called obesogens has been shown to cause obesity in animals and were associated with more fat mass in humans. EDCs are chemicals from outside of the body that interfere with the action of natural hormones present in living organisms. Hormones are secreted by the endocrine glands, such as the pancreas and thyroid, which regulate critical biological functions in the body including reproduction and glucose metabolism. Therefore, altering hormone levels or action can contribute to disease.

Obesogens act by inappropriately stimulating fat storage in the organism by altering fat tissue biology, energy balance and/or the regulation of metabolic needs.

Dibutyltin (DBT) salts are used in the manufacture of PVC (vinyl) plastics that are extensively utilized in many applications including construction materials (e.g., window frames and vinyl flooring), and medical devices (e.g., tubing and packaging). DBT has been found in seafood and house dust, suggesting that DBT exposure may be widespread. However, there is little information available about DBT levels in humans.

Exposure to DBT in mice

We used cells in culture to show that DBT activated two proteins that promote fat cell precursors to become mature fat cells, leading to more fat cells and increased fat in each. Therefore, chemicals that activate these receptors promote the development of fat tissue, making them obesogens.

In our study, cells exposed to concentrations of DBT that are in the realm of what humans are predicted to be exposed to showed increased fat storage, as seen under the microscope, as well as increased activity of genes involved in fat tissue development.

Additionally, we gave DBT to pregnant mice via their drinking water and extended the exposure through lactation. Male offspring, which were exposed during development in the womb and through maternal breast milk, accumulated more fat when their diet was changed from a low-fat to a slightly higher fat diet than did unexposed animals. This indicates that DBT exposure during development and early in life predisposed these DBT exposed animals to become obese. Interestingly, we did not find this response to diet in females.

In these mice we noted that insulin production in the pancreas was altered.

Interestingly, they also had increased higher levels of leptin, a hormone secreted by the fat tissue involved in the regulation of appetite and blood glucose levels. Higher fasting glucose levels were found in both genders, but only males showed increased leptin levels and glucose intolerance. The results of our study indicate early exposure to obesogen DBT and increased dietary fat induces prediabetes in male mice.

Since the sources of human exposure to obesogens are numerous, monitoring obesogen levels, including DBT, in human tissues will help understand and prevent the increasing rates of metabolic disorders such as obesity and T2D in human populations. Reducing the use of plastics that contain obesogens will not only improve our health but will be good for the environment as well, considering the huge plastic garbage patches in the world’s oceans.