What Makes The Impossible Burger Look And Taste Like Real Beef? 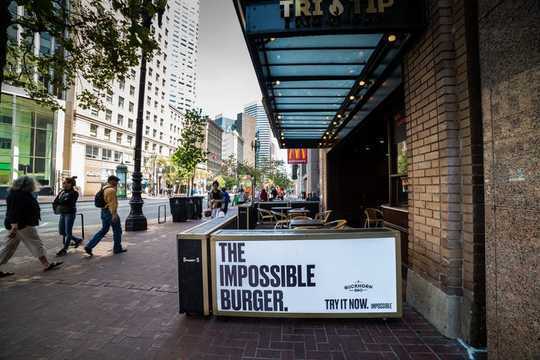 People eat animals that eat plants. If we just eliminate that middle step and eat plants directly, we would diminish our carbon footprint, decrease agricultural land usage, eliminate health risks associated with red meat and alleviate ethical concerns over animal welfare. For many of us, the major hurdle to executing this plan is that meat tastes good. Really good. By contrast, a veggie burger tastes like, well, a veggie burger. It does not satisfy the craving because it does not look, smell or taste like beef. It does not bleed like beef.

Impossible Foods, a California-based company, seeks to change this by adding a plant product to their veggie burger with properties people normally associate with animals and give it the desired qualities of beef. The Impossible Burger has been sold in local restaurants since 2016 and is now expanding its market nationwide by teaming up with Burger King to create the Impossible Whopper. The Impossible Whopper is currently being test marketed in St. Louis, with plans to expand nationally if things go well there.

But what exactly is being added to this veggie burger? Does it make the burger less vegan? Is the additive from a GMO? Does it prevent the burger from being labeled organic?

I am a molecular biologist and biochemist interested in understanding how plants and bacteria interact with each other and with the environment, and how that relates to human health. This knowledge has been applied in a way that I did not anticipate to develop the Impossible Burger.

What on earth is leghemoglobin?

The Impossible Burger includes an ingredient from soybeans called leghemoglobin, which is a protein that is chemically bound to a non-protein molecule called heme that gives leghemoglobin its blood red color. In fact, a heme – an iron-containing molecule – is what gives blood and red meat their color. Leghemoglobin is evolutionarily related to animal myoglobin found in muscle and hemoglobin in blood, and serves to regulate oxygen supply to cells.

Heme gives the Impossible Burger the appearance, cooking aroma and taste of beef. I recruited a scientific colleague in St. Louis to try out the Impossible Whopper, and he could not distinguish it from its meaty counterpart. Although he was quick to qualify this by noting all of the other stuff on the Whopper may mask any differences. 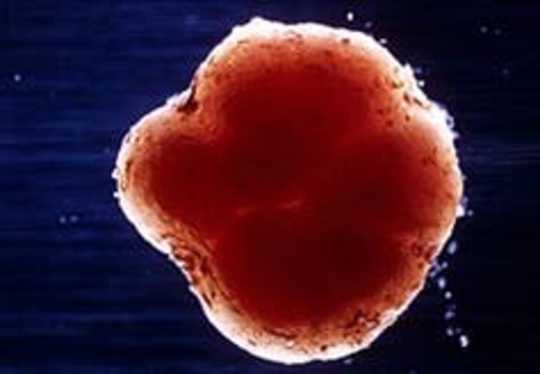 A cross section of a soybean root nodule. The red color is due to leghemoglobin. CSIRO, CC BY

So, why aren’t soybean plants red? Leghemoglobin is found in many legumes, hence its name, and is highly abundant within specialized structures on the roots called nodules. If you cut open a nodule with your thumbnail, you will see that it is very red due to leghemoglobin. The soybean nodule forms as a response to its interaction with the symbiotic bacterium Bradyrhizobium japonicum.

I suspect that Impossible Foods depicts a soybean without nodules on their website because people tend to be creeped out by bacteria even though Bradyrhizobium is beneficial.

My research group’s interest in the symbiotic relationship between the soybean and its bacterial sidekick Bradyrhizobium japonicum is motivated by the goal of reducing humanity’s carbon footprint, but not by creating palatable veggie burgers.

The bacteria within root nodules take nitrogen from the air and convert it to a nutrient form that the plant can use for growth and sustenance – a process called nitrogen fixation. The symbiosis lessens the reliance on chemical nitrogen fertilizers, which consume a lot of fossil fuel energy to manufacture, and which also pollute the water supply.

Some research groups are interested in extending the symbiosis by genetically engineering crops such as corn and wheat so that they can reap the benefits of nitrogen fixation, which only some plants, including legumes, can do now.

I am pleasantly surprised and a little amused that esoteric terms of my vocation such as heme and leghemoglobin have found their way into the public lexicon and on the wrapper of a fast-food sandwich. 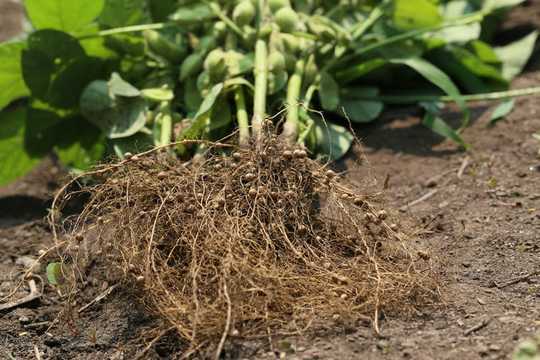 Root nodules occur on the roots of legumes associated with symbiotic nitrogen-fixing bacteria. Within legume nodules, nitrogen gas in the air is converted into ammonia. Kelly Marken/Shutterstock.com

Is leghemoglobin vegan? A non-GMO? Organic?

Leghemoglobin is the ingredient that defines the Impossible Burger, but it is also the additive most closely scrutinized by those seeking assurances of it being organic, non-GMO or vegan.

The leghemoglobin used in the burgers comes from a genetically engineered yeast that harbors the DNA instructions from the soybean plant to manufacture the protein. Adding the soybean gene into the yeast then makes it a GMO. The U.S. Food and Drug Administration agrees with the “generally recognized as safe” (GRAS) designation of soybean leghemoglobin. Nevertheless, the U.S. Department of Agriculture prohibits the “organic” label for foods derived from genetically modified organisms. It is ironic that an innovation that may be eco-friendly and sustainable must be readily dismissed by groups that claim to share those goals.

Not all vegans are delighted by this new burger. Some insist that a GMO product cannot be vegan for various reasons, including animal testing of products such as leghemoglobin. In my view, the moral certitude of that position can be challenged because it does not take into account the cattle that are spared. Other vegans view GMOs as a solution to problems that are important to them.

Judging from its website, Impossible Foods is keenly aware of the constituencies that weigh in on their product. It includes a link describing how GMOs are saving civilization. But they also make the misleading claim that “Here at Impossible Foods, heme is made directly from plants.” In reality, it comes directly from yeast.

The commercialization of leghemoglobin represents an unanticipated consequence of inquiry into an interesting biological phenomenon. The benefits of scientific research are often unforeseen at the time of their discovery. Whether or not the Impossible Burger venture succeeds on a large scale remains to be seen, but surely food technology will continue to evolve to accommodate human needs as it has since the advent of agriculture 10,000 years ago.

Clean Meat: How Growing Meat Without Animals Will Revolutionize Dinner and the World