Written by University Of Chicago 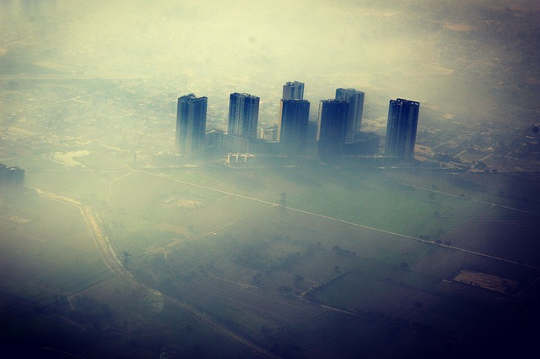 People in northern China have a reduced life expectancy when compared with people living in the south due to higher concentrations of air pollution, a new study suggests.

The study also outlines a new method researchers developed to calculate the impact of air pollution on life expectancy.

There are currently an estimated 4.5 billion people around the world exposed to levels of particulate air pollution that are at least twice what the World Health Organization considers safe. Yet the impact of sustained exposure to pollution on a person’s life expectancy has largely remained a vexingly unanswered question.

“…the impact on life expectancy in many parts of the world [is] similar to the effects of every man, woman, and child smoking cigarettes for several decades…”

The study finds that a Chinese policy is unintentionally causing people in northern China to live 3.1 years less than people in the south. The study found that this was due to air pollution concentrations that are 46 percent higher in the north than in the south.

The new findings imply that every additional 10 micrograms per cubic meter of particulate matter pollution reduces life expectancy by 0.6 years. The elevated mortality is entirely due to an increase in cardiorespiratory deaths, indicating that air pollution is the cause of reduced life expectancies to the north.

“These results greatly strengthen the case that long-term exposure to particulates air pollution causes substantial reductions in life expectancy. They indicate that particulates are the greatest current environmental risk to human health, with the impact on life expectancy in many parts of the world similar to the effects of every man, woman, and child smoking cigarettes for several decades,” says study coauthor Michael Greenstone, director of the Energy Policy Institute at the University of Chicago and a professor in economics.

“The histories of the United States, parts of Europe, Japan, and a handful of other countries teach us that air pollution can be reduced, but it requires robust policy and enforcement,” Greenstone says.

The study exploits China’s Huai River policy, which provided free coal to power boilers for winter heating to people living north of the river and provided almost no resources toward heating south of the river. The policy’s partial provision of heating occurred because China did not have enough resources to provide free coal nationwide.

Additionally, since migration was greatly restricted, people exposed to pollution were generally not able to migrate to less polluted areas. Together, the discrete change in policy at the river’s edge and the migration restrictions provide the basis for a powerful natural experiment that offers an opportunity to isolate the impact of sustained exposure to particulates air pollution from other factors that affect health.

“Unveiling this important information helps build the case for policies that ultimately serve to improve the lives of the Chinese people and the lives of those globally who suffer from high levels of air pollution,” says study coauthor Maigeng Zhou, deputy director of the National Center for Chronic and Noncommunicable Disease Control and Prevention in the Chinese Center for Disease Control and Prevention.

Overall, the study provides solutions to several challenges that have plagued previous research. In particular, prior studies rely on research designs that may be unlikely to isolate the causal effects of air pollution; measure the effect of pollution exposure for relatively short periods of time (e.g., weekly or annually), failing to shed light on the effect of sustained exposure; examine settings with much lower pollution concentrations than those currently faced by billions of people in countries, including China and India, leaving questions about their applicability unanswered; measure effects on mortality rates but leave the full loss of life expectancy unanswered.

“The study’s unique design provides solutions to several challenges that have been difficult to solve,” says coauthor Maoyong Fan, an associate professor at Ball State University. “The Huai River policy also provides a research design that can be used to explore a variety of other questions about the long-run consequences of exposure to high levels of pollution.”

The study follows on an earlier study, conducted by some of the same researchers, which also utilized the unique Huai River design. Despite using data from two separate time periods, both studies revealed the same basic relationship between pollution and life expectancy.

The new study’s more recent data, however, cover a population eight times greater than the previous one. It also provides direct evidence on smaller pollution particles that are more often the subject of environmental regulations.

“This new study provides an important opportunity to assess the validity of our previous findings. The striking finding is that both studies produced remarkably similar results, increasing our confidence that we have uncovered the causal relationship between particulates air pollution and life expectancy,” says Avraham Ebenstein, a lecturer in the environmental economics and management department at Hebrew University of Jerusalem and an author of both studies.

Since the earlier paper, China has increased its efforts to confront its air pollution challenge. China is switching its primary source of heating from coal-fired boilers to gas-fired or electric units, and it has shut down many polluting plants. The consequence is that particulate air pollution in some of China’s most polluted cities, such as Beijing, has improved significantly.

“Our findings show that these changes will bring about significant health benefits for the Chinese people in the long run,” says coauthor Guojun He, an assistant professor at the Hong Kong University of Science and Technology. “If all of China were brought into compliance with its Class I standards for PM10 (40), more than 3.7 billion life-years will be saved.”

Importantly, the results from this paper can be generalized to quantify the number of years that air pollution reduces lifespans around the globe—not just in China. Specifically, Greenstone and his colleagues at EPIC used the finding that an additional 10 micrograms per cubic meter of PM10 reduces life expectancy by 0.6 years to develop a new pollution index, the Air Quality-Life Index.

The index allows users to better understand the impact of air pollution on their lives by calculating how much longer they would live if the pollution in the air they breathe were brought into compliance with national or WHO standards. It also serves as an important complement to the frequently used Air Quality Index, which is a complicated function of air pollution concentrations and does not map directly to long-term human health.

“The AQLI uses the critical data and information gathered from our China research and applies it to every country, allowing the billions of people around the world who are exposed to high air pollution levels to estimate how much longer they would live if they breathed cleaner air,” said Greenstone.

The study appears in the Proceedings of the National Academy of Sciences.

What You Can Do To Keep Your Kids Safe From Pesticides