Is CBD The Next Weapon In The War Against Opioid Addiction? 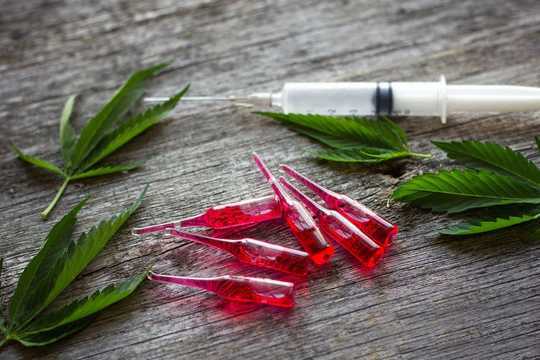 A new study suggests that CBD could help curve cravings in people who have an opioid use disorder. Evgenly Goncharov photo/Shutterstock.com

CBD, or cannabidiol, is everywhere, with word on the street saying that it can cure everything from a bad mood to cancer. However, most of these claims are not based on scientific evidence. Animal studies suggest that CBD might be beneficial for some health indications, such as pain, inflammation, arthritis and anxiety.

However, until recently, the only medical indication that CBD has been proven to treat in humans is seizures associated with pediatric epilepsy. Now, however, a recent study suggested that CBD curbed cravings in people with opioid dependence. This is one of the first double-blind controlled trials, the gold standard for drug research, to show benefit of using CBD outside epilepsy treatment. Thus, researchers can say with greater confidence that CBD may be helpful in fighting the war against opioid addiction.

While this study is very exciting, as scientists who study drugs and addiction, we want to stress that this study was very narrow and used specific, standardized amounts of CBD. Thus, the results do not suggest that buying a bottle or jar of over-the-counter CBD is going to help with opioid cravings – or any other medical conditions.

Addiction is a brain disease

In order to understand why CBD might be useful to treat opioid addiction, it is helpful to take a closer look at how addiction alters normal behavior. Addiction is broadly defined by the American Psychiatric Association as “a complex condition, a brain disease that is manifested by compulsive substance use despite harmful consequence.” Addiction is classified as a disease because addiction hijacks and alters the way how the brain processes information. 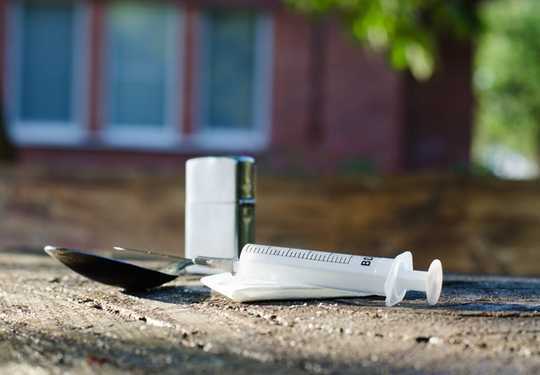 People with opioid addiction issues can often be triggered by seeing drug paraphernalia, which can trigger a relapse. Oleg Mikhaylov/Shutterstock.com

Specifically, areas of the brain critical in controlling the perception of daily and pleasurable activities are susceptible to the influence of addictive drugs. Due to the rewiring of the brain under addiction, the individual often perceives the world in context to their drug of choice. The brain learns to associate drug paraphernalia or the physical location of drug partaking in the context of receiving a drug. These cues become integral reminders and reinforcers of drug use.

These events occur with most known drugs of abuse, such as cocaine, alcohol, nicotine, methamphetamines as well as opioids.

Addiction is often thought of in terms of the pursuit of the “high” associated with the use of a drug. However, most addicts continue to use, or relapse when trying to quit using their respective addictive drug. This difficulty, despite the desire and often pressure by friends, family and co-workers to quit, is often due to the negative effects of drug withdrawal.

Depending on the drug, the symptoms of drug withdrawal can vary and range from mild to severe intensity. In the case of opioid withdrawal, symptoms often include anxiety, nausea, vomiting, diarrhea, abdominal cramps and rapid heartbeat. An individual going through opioid withdrawal experiencing extreme conditions of anxiety is likely to take opioids to alleviate that anxiety. This sort of behavior can be repetitive, leading to a what is called a feed-forward loop of dependence on an abused drug.

A person is often referred to as “dependent” on a drug when the drug must be present for the individual to function normally. Importantly, anxiety and depression are correlated with opioid dependence.

For dependent individuals, ongoing use of a drug is not perceived as a conscious choice, but rather an evil necessity. Medication-assisted treatment with drugs like methadone or buprenorphine, allows for an individual to undergo recovery from an opioid use disorder. The use of medication assisted treatment significantly decreases the likelihood of an individual to relapse and fatally overdose due to withdrawal or dependence symptoms.

CBD was tested in several clinical trials and was shown to work and to be safe in treating a rare form of epilepsy. A pharmaceutical grade CBD, Epidiolex, gained FDA approval in June 2018 for this specific usage.

CBD is currently only prescribed as the drug Epidiolex. That is because, up until now, CBD has only been shown to be safe and effective in the treatment of intractable pediatric epilepsy.

Importantly, CBD binds to different receptors than those that lead to opioid addiction.

In experiments reported in 2009, rats were trained to press a lever to receive heroin. CBD did not decrease the amount of heroin that the rats self-administered, or the drug seeking behavior displayed by the rat while taking heroin. However, when rats were taken off heroin and given CBD, there was a decrease in drug-seeking behavior when the animals were exposed to a heroin-associated cue.

Initial studies of CBD in humans verified that CBD, when co-administered with fentanyl, is safe and well tolerated in healthy, non-opioid dependent individuals. A 2015 report of a small double-blind study conducted in opioid-dependent individuals found that a single administration of CBD, in comparison to a placebo, decreased cue-induced craving of opioids and feelings of anxiety. A double-blind, placebo-controlled study means that doctors and patients in the study do not know who is getting a real drug and who is getting a placebo. That is to guard against what is known as the placebo effect.

A double-blind placebo-controlled study published on May 21, 2019 adds to these findings by demonstrating that the Food and Drug Administration-approved Epidiolex can reduce cue-induced craving in individuals that had been former heroin users. Furthermore, in these individuals, Epidiolex reduced reports of anxiety, and blood levels of cortisol, a hormone known to increase under conditions of stress and anxiety.

Although further studies are needed, these studies strongly suggest that Epidiolex or CBD may hold promise as a critical weapon in fighting the opioid epidemic.

This could be a big deal. 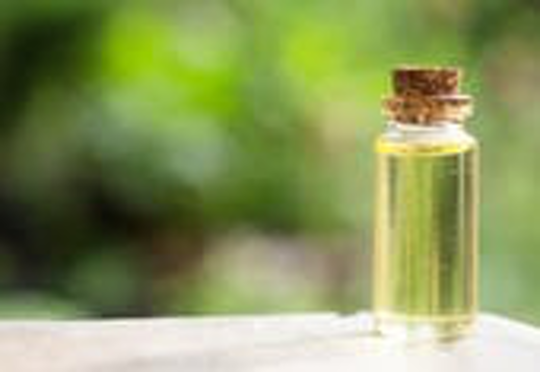 A bottle of CBD oil may contain unpredictable amounts of CBD, and it also could contain THC. WIRACHAI/Shutterstock.com

Before rushing out to purchase over-the-counter CBD to treat any medical condition, there are several practical considerations that should be considered.

Only Epidiolex is FDA-approved for a medical condition – pediatric seizures. All other forms of CBD aren’t regulated. There have been numerous consumer reports that show that the actual amount of CBD in over-the-counter products is significantly less than what is reported on the label. Also, some of these over-the-counter products contain enough THC to show up on drug tests.

Although Epidiolex was found to be safe in clinical trials, it can interact with other drugs prescribed for migraines and bipolar disorder. This could mean that taking CBD with certain drugs could diminish or enhance the effects of prescriptions, leading to problems controlling particular medical conditions that were once well-managed, or increase side effects of the other medications. For this reason, it is incredibly important to talk to your doctor or pharmacist about potential drug interactions before using CBD.


American Fix: Inside the Opioid Addiction Crisis - and How to End It


A House on Stilts: Mothering in the Age of Opioid Addiction

Is Cannabidiol A Rising Star Or Popular Fad?