How Loud Noise May Change Hearing 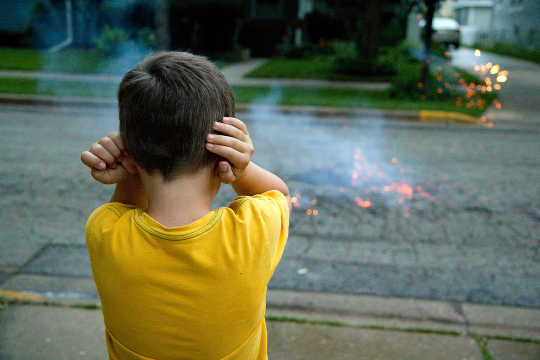 Our modern world is loud. Just sitting in a car, or an airplane, or watching movie previews, we are bombarded with sound. Even when those noises aren’t damaging to the sensitive microphone that is our ear, our auditory system is constantly activated. What are the consequences of this?

One reason noise is a problem is that it is associated with tinnitus. Tinnitus, or ringing in the ears, is very common, affecting about 10 percent of the population. For some people, it can be severe enough to interfere with everyday life.

The sensation of ringing seems to originate in the brain, not in the ear . But where does that mistaken activity start, and is there any way of stopping it? If we can determine the origin, it might help us figure out ways to prevent or cure tinnitus.

Understanding how the auditory system deals with loud noise would have big implications, because we are all regularly exposed to loud sounds, sometimes for extended periods.

I am a researcher studying the very first place that activity from the ear enters the brain. My students and I became interested in these questions because we have long wondered how the auditory system deals with loud environments.

Running down the synapse

We expected that loud noise would deplete an essential component to the hearing process. That essential component is located at the connections between nerve cells, which are called synapses. In hearing, synapses are critical gatekeepers for transmitting information about sounds from the ear to the brain. Synapses work when an electrical impulse in one cell triggers the release of little packets of chemicals, called neurotransmitters, that cause electrical changes in the next cell across the synapse.

Those packets of neurotransmitter take some time to be replenished. That means that if brain cells carrying information from the ear are highly active, the neurotransmitter could get used up, so there would not be enough to activate their targets in the brain, and the signal would get lost.

This is a particular issue when the signals occur faster than the synapse can restock. For cells in the auditory system, this could be a real problem, because they experience among the fastest rates of activity, especially when they are subjected to intense sound.

So how do we continue to hear in loud environments, if our synapses can run out of neurotransmitter?

To explore this, we put mice in a loud environment for about a week. The noise was as loud as a hair dryer, enough to drive the auditory system without damaging the ear appreciably.

At the end of the week, we looked at changes in synapses formed by the auditory nerve, which carries signals from the ear into the brain. The synapses changed from the normal situation of getting rapidly depleted of neurotransmitter to hardly depleting at all.

This idea of adapting to activity is familiar, like how muscles bulk up after working out. But it was not known that synapses in the brain sense their activity too. This raises lots of questions about how it works.

These changes seem beneficial while the animal remains in loud noise, but what happens after returning to normal quiet conditions? We found that the synapses changed back to normal when mice were returned to quiet conditions, but this appears to take several hours or days.

So, immediately after returning to a quiet environment, the synapse would be overprepared and wouldn’t run out of neurotransmitter like normal. This could cause hyperactivation of auditory nerve targets in the brain, which could be perceived as sound even in the absence of sound, which is tinnitus.

My own experience is that my tinnitus gets worse after a long airplane or car trip. One possibility is that my synapses are adapting to the loud sound conditions, which causes hyperactivity after the trip ends. To see how even limited noise exposure leads to tinnitus, we have just begun a collaboration with Micheal Dent and her lab, because they are experts in the hearing abilities of mice. These studies in mice may help us to understand if this is an unrecognized risk factor for tinnitus in humans.

This study also made us wonder: If loud noise causes synaptic changes, what about decreases in sound? Small children commonly experience decreases in sound, because about half of them experience an ear infection, usually in their first two years. Ear infections lead to a buildup of fluid behind the eardrum, which reduces the ability of sound to get from the external part of the ear to the business end tucked inside.

For some kids, there can be long-term consequences of sound deprivation, where they have trouble processing language.

We have started to examine how auditory nerve synapses in mice are affected when their ears are plugged. Interestingly, we saw the opposite of what happened with noise. After one week’s plugging, the synapses got smaller, and the stores of neurotransmitter shrank, leading to even faster depletion than normal.

We think these changes help maximize efficiency. A large stock of unused neurotransmitter would be wasteful when activity is low, so the synapse can shrink. Also, low activity means synapses would have more time to replenish minimal neurotransmitter stores between bouts of signaling.

This prompted me to think about my own family. My daughter was prone to ear infections when she was little. It seemed that every few months we would go to the pediatrician, who would wait until there was visible buildup of fluid behind the eardrum before prescribing antibiotics to cure the infection. This is understandable, because of concern about overuse of antibiotics causing resistance.

But when these episodes would occur, we never actually tested my daughter’s hearing to know the extent or duration of hearing loss. Now I know that her auditory nerve synapses were likely changing. Did any of these changes become permanent? I don’t think she has problems processing language, but I wonder about other aspects of auditory processing.

This work gives us new appreciation for auditory nerve synapses. They have been thought of as machines whose job was to relay information dependably. Now we know that job is not so simple after all. The synapses are continually assessing their activity and adjusting themselves to optimize and economize their performance. We think these changes or ones like them at other synapses could lead to long-term consequences for tinnitus and language processing.

The Art of Hearing: Seven Practical Methods for Improving Your Hearing


Hearing: Hearing Loss Cure: Get Your Hearing Back and Hear Better Than Ever Before *BONUS: Sneak Preview of 'The Memory Loss Cure' Included!* (Aging, Tinnitus, Hearing Recovery, Deaf, Health)


Improving Our Acoustics for Hearing the Gospel