Time To Cook Is A Luxury Many Families Don't Have 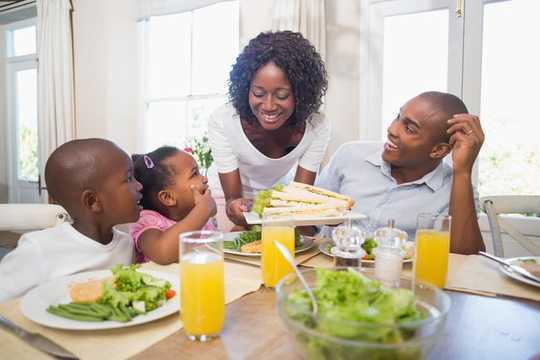 Getting a healthy meal on the table every night is a challenge for many mothers. ESB Professional/Shutterstock.com

Have Americans forgotten how to cook? Many lament the fact that Americans spend less time cooking than they did in previous generations. Whereas women spent nearly two hours a day in the kitchen in 1965, they spent a little less than an hour preparing meals in 2016. Men are cooking more than they used to, but still only cook 20 minutes a day.

In a 2014 TED Talk, which has more than 8 million views, British chef and food celebrity Jamie Oliver paces the stage, lecturing the audience about the amount of processed food people in the United States consume. His message: Americans “need to start passing on cooking skills again.”

Oliver and other food reformers believe that the time is there to cook, if only people would get their priorities straight. Families could be more efficient by cooking in batches on the weekend or investing in time-saving gadgets like the Instant Pot.

But telling families to better manage their time is not likely to solve the cooking struggles American families face.

As social scientists who study food, family and health, we embarked on a five-year study to find out what it takes to put a meal on the table. We interviewed a diverse group of 150 mothers of young children and spent over 250 hours observing families as they shopped for groceries, cooked meals and ate them.

The results, published in our recent book “Pressure Cooker: Why Home Cooking Won’t Solve Our Problems and What We Can Do About It,” reveal that the mothers in our study cared deeply about food and their children’s health, and they spent a good deal of time cooking. But even so, most felt they were coming up short. Their experiences illustrate why insisting that parents “make time to cook” overlooks why unpredictable work schedules, time conflicts and the expense of time-saving options matter.

Americans’ work lives are increasingly unpredictable and hectic. A 2015 study found that 17% of people have jobs with irregular schedules, a disproportionate number of them low-income workers. Having little control over time makes it difficult for families to plan their meals in advance or even to know who will be there for dinner. Nonstandard work schedules are also associated with an increased risk of health problems. When food experts or celebrity chefs talk about making time for dinner, they rarely consider households whose daily rhythm is largely out of their control.

This was the case for Ashley and Marquan Taylor (all names are pseudonyms), a working-class family in our study. The couple worked for the same fast food chain, but at different branches, 45 minutes apart. They picked up as many shifts as they could with the hopes of repairing their car and catching up on the bills.

Ashley did her best to put meals on the table. She kept a meticulous binder of coupons to save the family money at the grocery store. However her unpredictable work schedule made it difficult to find time to cook. “I told the manager to put me on a schedule,” Ashley explained, sounding exasperated. “They ask me every day if I can stay late.” Much of Ashley’s day is governed by the decisions other people make. 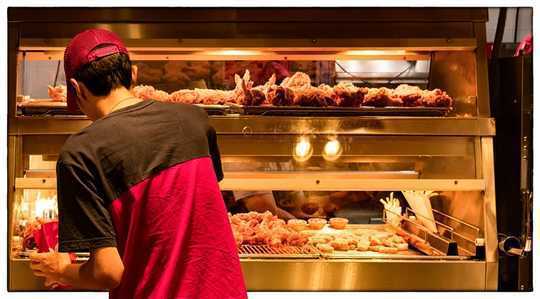 The idea of slowing down and making time for food sounds ideal. But in reality, today’s families have a lot on their metaphorical plate. Surveys show that working parents report feeling rushed. Mothers, in particular, feel overwhelmed. Women still do the majority of cooking and housework, even though 76% of mothers with a child between the ages of 6 and 17 work outside the home.

Women also experience cultural pressure to be highly involved in their children’s lives. Greely Janson, a middle-class mother in our study, felt this pressure acutely. “When I have the time, I enjoy cooking. But when it’s so compressed after a stressful day, cooking is horrible,” she said. Greely felt torn at the end of the day. She wanted to cook and help her daughter finish her Valentine’s Day cards for school. Greely tried cooking in batches on the weekend to save time during the week. It worked for a little while. But then life got even more hectic. As Greely and her husband’s work hours increased, and they continued shuttling their daughter to after-school activities, Greely’s time-saving system broke down.

Despite her best efforts, Greely couldn’t manage competing demands — like cooking healthy meals and doing school projects with her daughter — as well as she wanted. And she is not alone. Although parents today spend more quality time with their kids than parents in 1965, many still feel like it’s not enough time. When food reformers tell parents they aren’t taking the time to prepare healthy, fresh meals, they fail to recognize the competing commitments parents are managing. 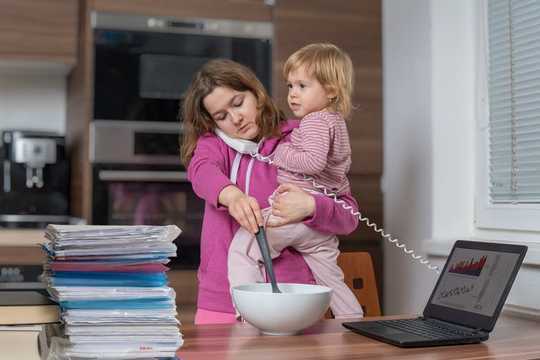 Many mothers are constantly juggling a job, childcare and meal preparation. vchal/SHutterstock.com

The market has solutions for families looking to cook from scratch more efficiently. Meal delivery kits like HelloFresh or Blue Apron take the work out of planning a meal. And supermarkets will deliver groceries to your door, for a price. Some food advocates argue that kitchen technologies make cooking from scratch easier than ever. The problem is that many families cannot afford food processors, an Instant Pot or a meal delivery subscription. Other options like pre-cut vegetables also save time, but cost more than whole vegetables. Market solutions exist for those who can pay for them. But for many poor and working-class families, these options are out of reach. 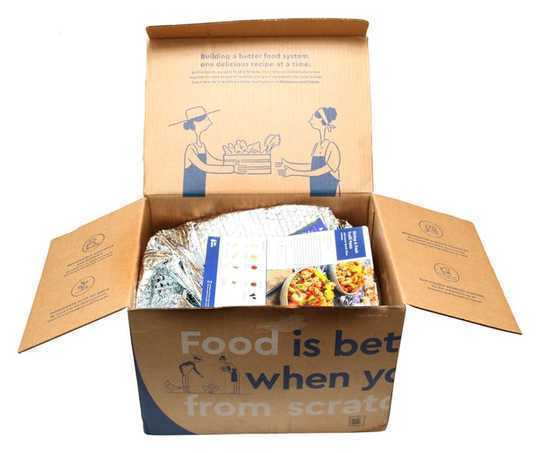 Americans are increasingly strapped for time and struggle to find balance. Society cannot keep asking parents – and especially mothers – to do more with the little time they have. Families, like the ones in our study, are already prioritizing food and their children’s health. But many simply don’t have as much time, or control over their time, as food reformers imagine.

Americans need to spend less time blaming parents for not using their time well, and more time advocating for better working conditions and more support for families. Many of the families in our study found the idea of slowing down and eating together appealing. But in order for this to happen, they need predictable work schedules and a living wage that pays the bills.

Demanding workplaces and the cultural expectation to parent intensively place a huge time burden on today’s parents. Investing in families and their health requires taking the time to support them.