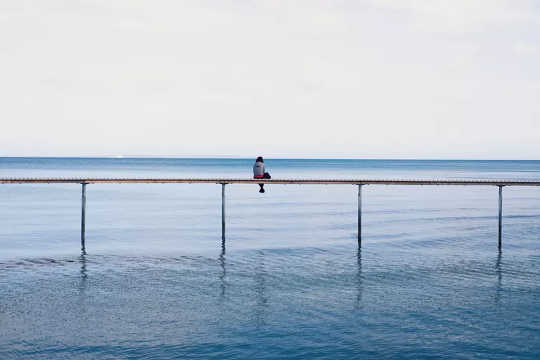 Family and friends have an important role to play in detecting suicide risk and supporting the person. Thomas Peham/Unsplash

Australia’s leading mental health organisations have launched a new campaign – #YouCanTalk – to encourage Australians to ask people they’re concerned about if they’re thinking about taking their own life or have made a plan to do so.

This recommendation runs counter to commonly-held fears that talking about suicide might make matters worse by further upsetting the person or even putting the idea in their head.

So what does the research show, and what should you say and avoid?

There are two types of evidence on this issue. The first comes from studies that ask people about suicidal thoughts and then assess whether this causes them further distress or increases their suicidal thoughts.

In one US study, a large group of high school students was randomly assigned to either fill out a questionnaire about suicidal thoughts or not.

There were similar findings from a study of Singaporean adults. The researchers randomly assigned participants to answer questions about suicidal feelings and reasons for living or dying, or to a control group that answered questions on quality of life.

No ill effects were found of asking about suicide, and a few of the participants commented that participation in the study gave them the chance to share suicidal feelings for the first time.

The second type of evidence is based on the advice of suicide experts who are either mental health professionals who work with suicidal people, or those who have been suicidal in the past and taken on an advocacy role.

Both types of experts agree that talking about suicidal thoughts can be a relief to a suicidal person. It allows them the chance to talk about their problems and feel that somebody cares.

The same has been found when asking suicide experts from a wide range of countries and cultures, including Aboriginal and Torres Strait Islander mental health experts. There is overwhelming agreement from all these experts that we should talk about these issues openly.

Everyone has a role to play

Suicidal thoughts are quite common. A national survey of Australian adults found that 13% had considered suicide at some time in their life, while 3% had made an attempt.

In adolescents, the rates are higher. A national survey found that 7.5% had considered attempting suicide over the past year and 2.4% had made an attempt.

Every one of us is likely to have close contact with a person who is suicidal. This means family and friends need to play a role in detecting suicide risk and supporting the person.

How to help a suicidal person

There are three important things to know about helping a person who may be suicidal.

But avoid asking in leading or judgemental ways, such as, “You’re not thinking of doing anything stupid, are you?”

Second, listen to the person’s responses without judgement. Let them talk about why they want to die. This can be a relief to the person.

Don’t try to convince the person that suicide is wrong, or tell them how much they would hurt their family if they died. Such judgemental approaches will shut down communication and the opportunity for the person to get support.

Third, tell the person at risk that you care and want to help. Ask them how they would like to be supported and if there is anything you can do to help.

What do you do then?

If someone has told you they are thinking of ending their life, discuss the options for getting help. They may want help to make an appointment with a health professional such as a GP or counsellor, or to call a crisis line. You can provide the following helplines to the person, or call them yourself to ask how to best help in a specific situation:

Detailed guidelines for helping people who are thinking about suicide also cover signs a person may be suicidal, how to approach the person, how to talk with them, how to assess the urgency of the situation, how to keep them safe, what to do if a person has acted on suicidal thoughts, and how to deal with confidentiality issues.

There are also guidelines available on how to help an Aboriginal or Torres Strait Islander person or a person from an immigrant or refugee background who is suicidal.

Short training courses are also available for the public and have been found to improve the quality of support to a suicidal person. These courses can give information and skills specifically about how to recognise and assist a person who is suicidal and how to keep the person safe until professional help is found.

Around 3,000 Australians die by suicide every year, and more than 60,000 attempt to end their lives. Health services can only provide part of the solution. If we are to reduce this alarming toll, we need every Australian to play a part.

Strange Contagion: Inside the Surprising Science of Infectious Behaviors and Viral Emotions and What They Tell Us About Ourselves