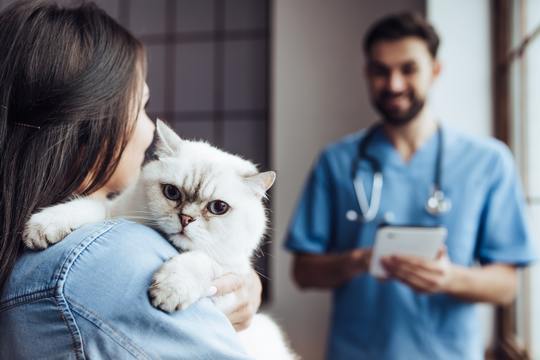 The personality of a pet owner can help a veterinarian understand the health and welfare of the pet. Shutterstock/PM Production

There’s an old saying that pets and their owners become more similar as time goes by. There may be some truth in that, but can we use information about owners to improve veterinary care?

Research is showing the health and welfare of pets can be influenced by personality traits in their owners.

Those who scored highly on neuroticism were more likely to demonstrate a preference for pedigree rather than non-pedigree cats.

Neuroticism is associated with emotional instability. People high on this trait tend to be generally more anxious and moody than others and may also respond more poorly to stress, often overreacting to small challenges.

Not surprisingly, therefore, the same group were also more likely to report their cats were showing unwelcome behaviours. These included signs of aggression, anxiety and fearfulness and more stress-related sickness behaviours, as well as having more ongoing medical conditions and being overweight.

Other animal and human studies

Similar relationships have been observed elsewhere. Parents who score highly on neuroticism may be more likely to have children with clinical obesity.

When it comes to dogs, our own studies have shown that working dog handlers who score highly on neuroticism report more attendance at competitions but no greater success in farm dog performance.

And male owners with moderate depression are at least five times more likely than those without depression to use punitive and coercive training techniques such as hitting, kicking or yelling at their dogs.

The same group of men also reported their dogs as showing significantly more house-soiling (urination and defecation when left alone) and aggression towards other dogs.

These important differences in personality and ownership styles may have a bearing on the welfare of pets.

The recent cat study shows owners high in neuroticism are more likely to keep their pets indoors or restrict their access to the outdoors.

This may reflect heightened concern about the risk of road traffic accidents or other hazards. It could lead to improved cat welfare, but only if such diligence is accompanied by behavioural enrichment indoors, such as toys and puzzle feeders.

Owner personality may also influence how often a cat is taken to a veterinary clinic. Owners who score highly in neuroticism may be hypervigilant in the way they scrutinise their cats, which can lead to extra trips to the vet.

This could actually compromise cat welfare, because many cats don’t like trips to the vet. Even the sight of a carry-cage can cause increased anxiety and flight response in a cat.

How to get a cat into a carrier.

On the other hand, such trips may lead to improved welfare if they result in better health, particularly if, upon arrival, the cats are subjected to low-stress handling.

Other findings from the cat study suggest some owner attributes may be associated with an extremely positive attitude towards their pets.

High scores for agreeableness were associated with cat owners tending to view their animals in a good light. These cats had fewer reported unwelcome behaviours and were less likely to be considered overweight.

Previous studies in dogs show owners are often poor judges of whether their pets are overweight or not.

Look to the owner

This evidence that attributes in the owner can influence how their pets are perceived, and the kind of life they experience, means anyone working with these animals needs some understanding of human psychology.

Behavioural change is often the first sign that an animal is unwell. One of the most revealing aspects of a case history is the behaviour changes that owners report.

The quality and accuracy of this information from owners on their pets is crucial. But this may be strongly influenced by the relationship that owners have with their pets, such as what they look for and the intensity of their appraisal.

This evidence that owner characteristics may influence many aspects of their pet’s life – including potentially how the pet presents to a veterinary clinic – prompts us to consider how we can improve the quality of data.

For clinical behaviour cases it is important to include video records of the animal’s unwelcome behaviour. Owners are already quite adept at capturing and supplying video evidence when consulting behavioural veterinarians.

But this video evidence can also help with veterinary consultations about other conditions such as neurological disorders and intermittent lameness.

There are tools that allow owners to capture and report data in real time, using apps such as doglogbook. They have the advantage of being simple to use and having a time/date stamp that may help to keep a chronological record of the owner’s observations.

The relationship between owners and veterinarians can be extremely complex and take some time to mature. A veterinarian who knows both owner and pet well will be able to detect subtle clinical signs that may otherwise go unnoticed.

Yet each clinical case must now be understood in the context of the human background baggage that enters the consultation room.

Further research will undoubtedly continue to provide new insights into the fascinating world of owner-pet relationships.